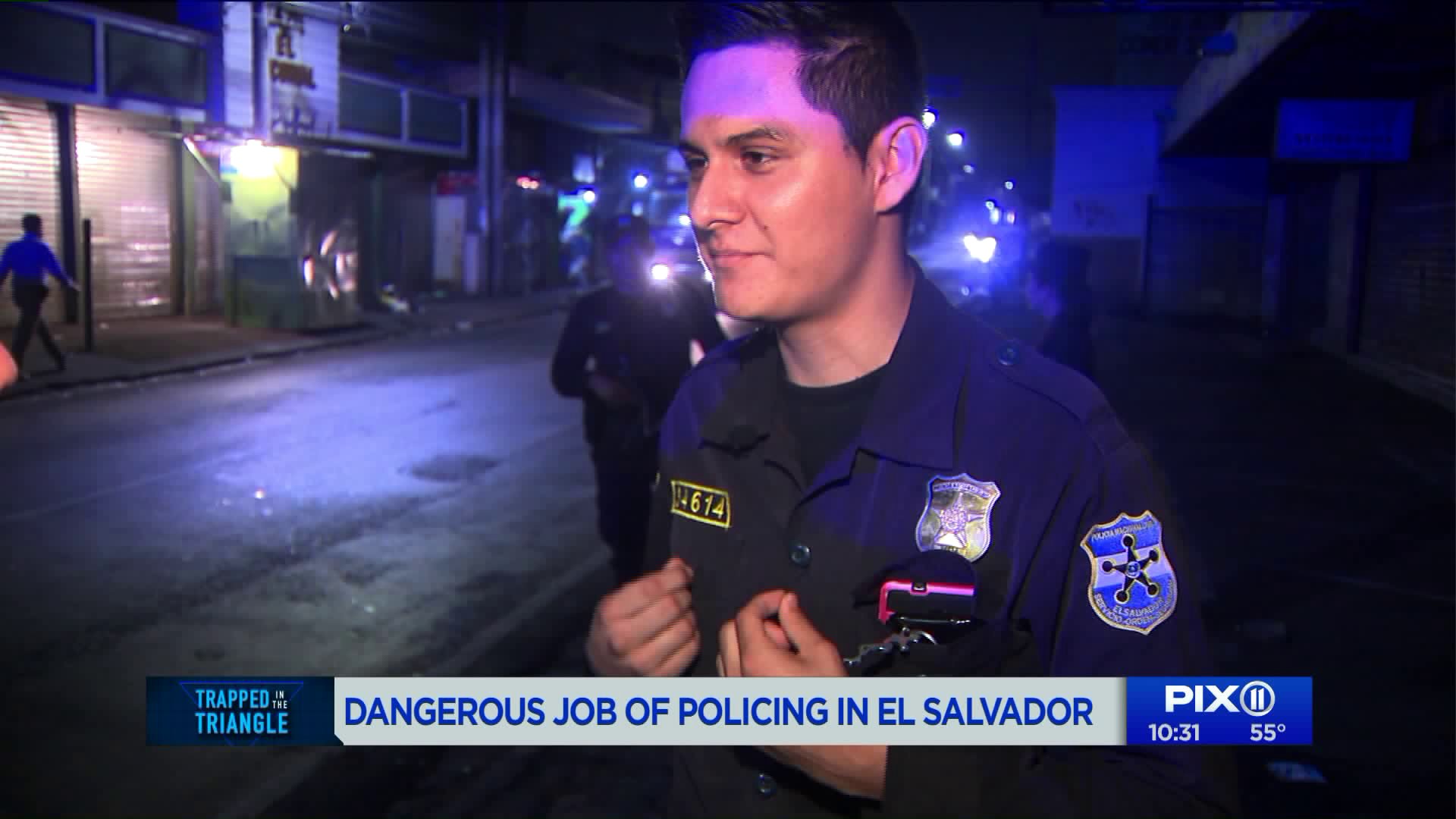 Officer William Zaldivar, a full-time officer and college student, has been on the job for only two years. Officer Zaldivar patrols the streets wearing a uniform that`s gotten ten officers killed so far in 2019. Gang members follow police officers after their shift to catch them off guard. For them, it`s not just about killing their victims. It`s also about the way they kill. It`s their way of making a statement.

Night has fallen in the capital of El Salvador as we ride along with the National Police under the cover of darkness, out on patrol.

Officer William Zaldivar, a full-time officer and college student, has been on the job for only two years.

“We help people here,” Zaldivar said. “But at the same time, in this country, it’s dangerous.”

The year before, 32 officers lost their lives in a country with the same population size as the state of Maryland.

“When I leave my shift, I have to take off my uniform and take the bus with the people. That’s when I’m vulnerable,” Officer Zaldivar said.

Gang members follow police officers after their shift to catch them off guard. For them, it’s not just about killing their victims. It’s also about the way they kill. It’s their way of making a statement.

“You don’t know whether the radio is going to say, there’s dead people, there’s no head people,” Officer Zaldivar said of the frequent decapitations. “There are many ways to kill people here.”

A local pastor knows a lot about how gang members kill. He used to be one of them, a member of MS-13.

He is now a self proclaimed evangelical Christian hoping to help kids leave gang life behind. We met him at his church in the Las Palmas neighborhood.

“I would say about fifteen,” he said about the number of people he killed.

He started participating in homicides when he was just 8 years old. The pastor said most of his victims were rival gang members and specific hits he was ordered to do.

“There’s still hope for gang members to turn their life around, repent and through religion, start anew,” he said.

This violence pushes Salvadorans to the North, but that’s not the only factor forcing people from their country.

About 300 miles away, droughts have been affecting local crops, which mean fewer jobs in rural communities.

“The last three years have been critical,” Francisco Cazares said.

He is in charge of a number of fields that have implemented new measures to battle what he calls a dramatic change in climate.

Many farm workers depend on the large fields in the El Zunca neighborhood of El Salvador. They said they don’t want to leave their communities. They will stay  as long as there is work, but say climate change is forcing some of them to leave.

PIX11 visited the area along with a New York delegation on a fact-finding mission to Central America here to understand why people are fleeing to the U.S. border.

“The impact of climate change is creating a drought situation, more extreme weather, a dryer season, more opportunity for pests that destroy crops to thrive. So to the extent that agriculture is a big part of the economy here, if climate change is disrupting the agricultural patterns, making the land less productive, again that only makes what is already a difficult economic situation even tougher," he said.

“There are a lot of us who want to work,” he said, but he has a warning. “The crops aren’t getting better. They’re getting worse.”

Farm workers are left looking for a way to survive. For many of them, that means the United States.