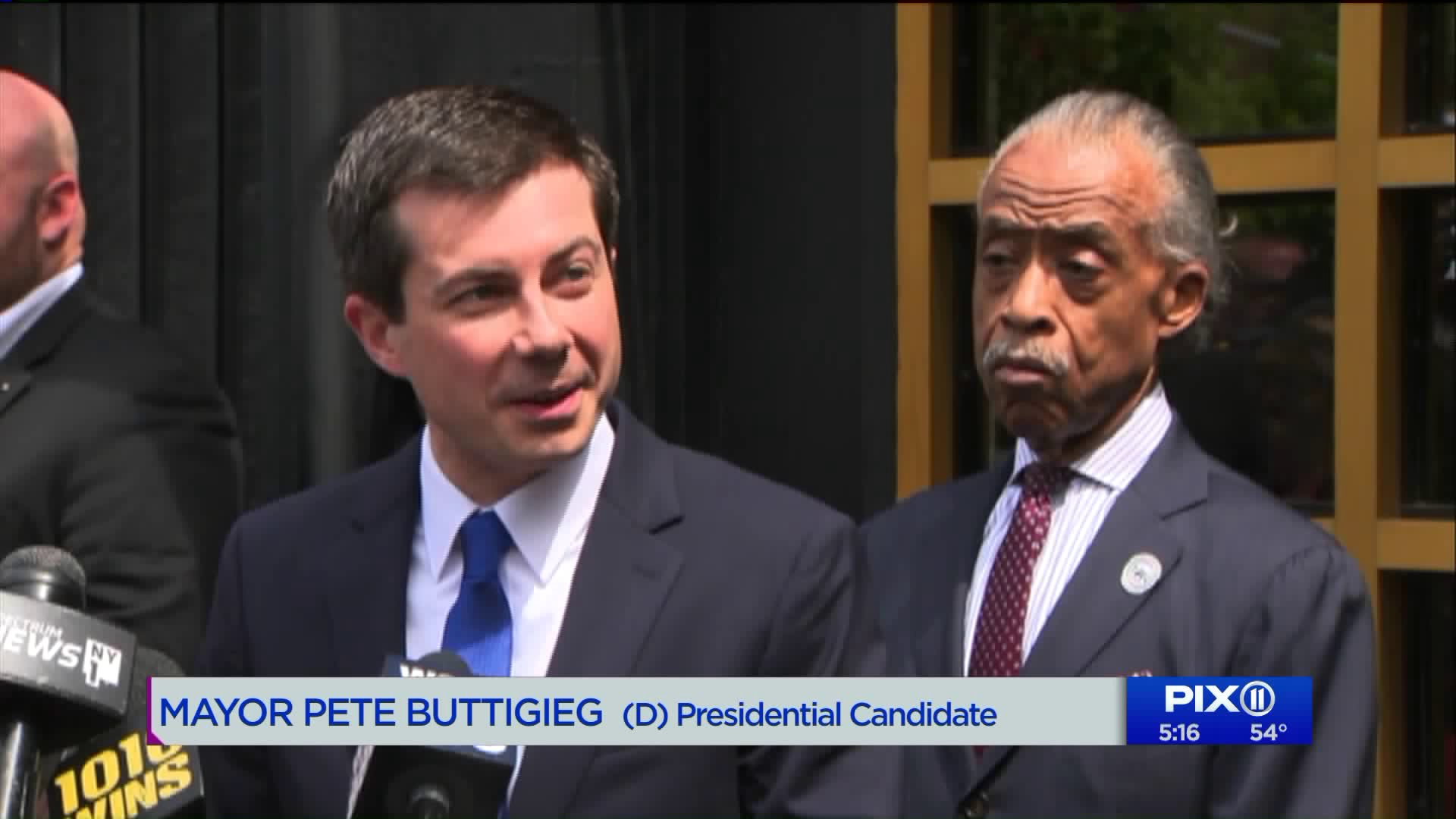 Buttigieg and the civil rights leader met for lunch in Harlem at Sylvia`s Restaurant, a cornerstone of black American culture where Sharpton has long brokered difficult racial conversations with embattled political leaders.

NEW YORK — He may be the mayor of a small Midwestern city, but Pete Buttigieg has become a strong contender for the Democratic Party nomination for president.

With his emergence has come an increased probing of his political record, which includes his firing the first African American police chief in the history of his city, South Bend, Indiana.

In the midst of the scrutiny on race that Buttigieg faces, he visited Harlem on Monday, in an effort to strengthen his ties to the African American community, as well as raise his profile overall in New York, which is a key primary state because of its large population of Democratic voters.

Buttigieg said that he'd come at the invitation of Rev. Al Sharpton. The two men emerged from the No. 3 subway train stop at 125th St., and walked the block-and-a-half to a Harlem institution. Sylvia's soul food restaurant was where Sharpton hosted the latest in a series of meals with presidential hopefuls over the years. This time, Buttigieg was in the guest seat, as well as in the hot seat.

"I do not know who that is," said Imani Welch, a lifelong New Yorker, when asked about the candidate. "I have never heard of him."

She was by no means the only local resident interviewed by PIX11 News who said that they had no clue about the mayor who has helped South Bend, a small, declining rust belt city, bounce back.

Buttigieg has a long way to go in order to become a household name, but he has raised more money than all but four other Democrats in a field crowded with 21 candidates. He also has some recognition among this community.

"The LBGT, whatever that situation," said lifelong Harlem resident Thomas Patterson, erroneously referring to LGBTQ Americans, "he's some part of."

He spoke about that at a news conference with Sharpton outside of Sylvia's after the two had met for about a half hour.

"I wasn't sure [of the reaction] when I came out back in South Bend," the 37-year-old candidate said. "But my community lifted me up . Anything is possible."

A variety of local residents said that Buttigieg's visit with Al Sharpton was reminiscent of one that had taken place at Sylvia's during the 2006 presidential campaign.

"It reminds me when all of the sudden we heard a name years ago," Marthette Welch told PIX11 News. "'Who is a Barack Obama?'" she said people had asked back then. She speculated that the outcome of Buttigieg's campaign could be similar to that of Obama, even though she said she had not made up her mind about her vote for a 2020 candidate.

Similarly connecting the Indiana mayor's trajectory with that of the former Illinois senator were members of a tour group from the Hoosier State that just happened to be having lunch at Sylvia's on Monday.

"What they [say] about Pete Buttigieg now," said Ken Damico, who lives in the county that includes South Bend, "that's what they said about Barack Obama."

He said that by the same token that an African American could become president in spite of early speculation that it was nearly impossible, an openly gay man might be able to do so as well.

Rev. Sharpton, however, told PIX11 News that while a Buttigieg presidency is possible, nobody should jump to conclusions.

The fact that the mayor, or any candidate, comes to Harlem, said Sharpton, "shows they want to relate. It doesn't mean I'm going to endorse, or anyone here is going to endorse. People are going to make their own decision."

Sharpton and Buttigieg met for about half an hour, then held their news conference, followed by another meeting away from the dozens of cameras on scene, which lasted another half hour.

“I’ve talked a lot about generational change and generational politics, and one of the things I know I needed to do is to be in touch with every generation in the struggle for equality,” Buttigieg said at the news conference.

Buttigieg said Sharpton wanted to know about his experience as mayor of South Bend and some of his most challenging times as mayor.

“It’s been complex, and it’s really formed me in terms of my understanding of race, politics, policy and community,” Buttigieg said.

The Navy veteran and Rhodes Scholar has gained in popularity since joining the 2020 race earlier this year.

Along with the increased name recognition have come questions about his record in South Bend, where shortly after taking office Buttigieg fired the city’s first black police chief, and about issues of housing and inequality in the city.

Buttigieg said racial justice and equality are important to him, and an important part of South Bend’s story.

“One thing I learned early in is having good intentions is not enough and that things don’t look the same depending on your life experience. Policing to economic inclusion, just because you’re trying generically to take care of everybody, doesn’t mean that support will reach everybody in the same way,” he said.

“There are too many structural — and in many cases, intentionally built — barriers to that. If you’re not equally intentional about tearing down those barriers, you’re gonna come up short. Our community held me accountable on that, they really educated me on that."

Buttigieg has also said he’s “learned some hard lessons” as mayor, including on race, and that “any white candidate needs to show a level of consciousness around issues like white privilege.”

He plans to focus on black voters during a visit to South Carolina next month that includes a stop at a historically black university.

Sharpton sat down with another 2020 Democratic hopeful, California Sen. Kamala Harris, in February amid criticism of her record as a prosecutor.