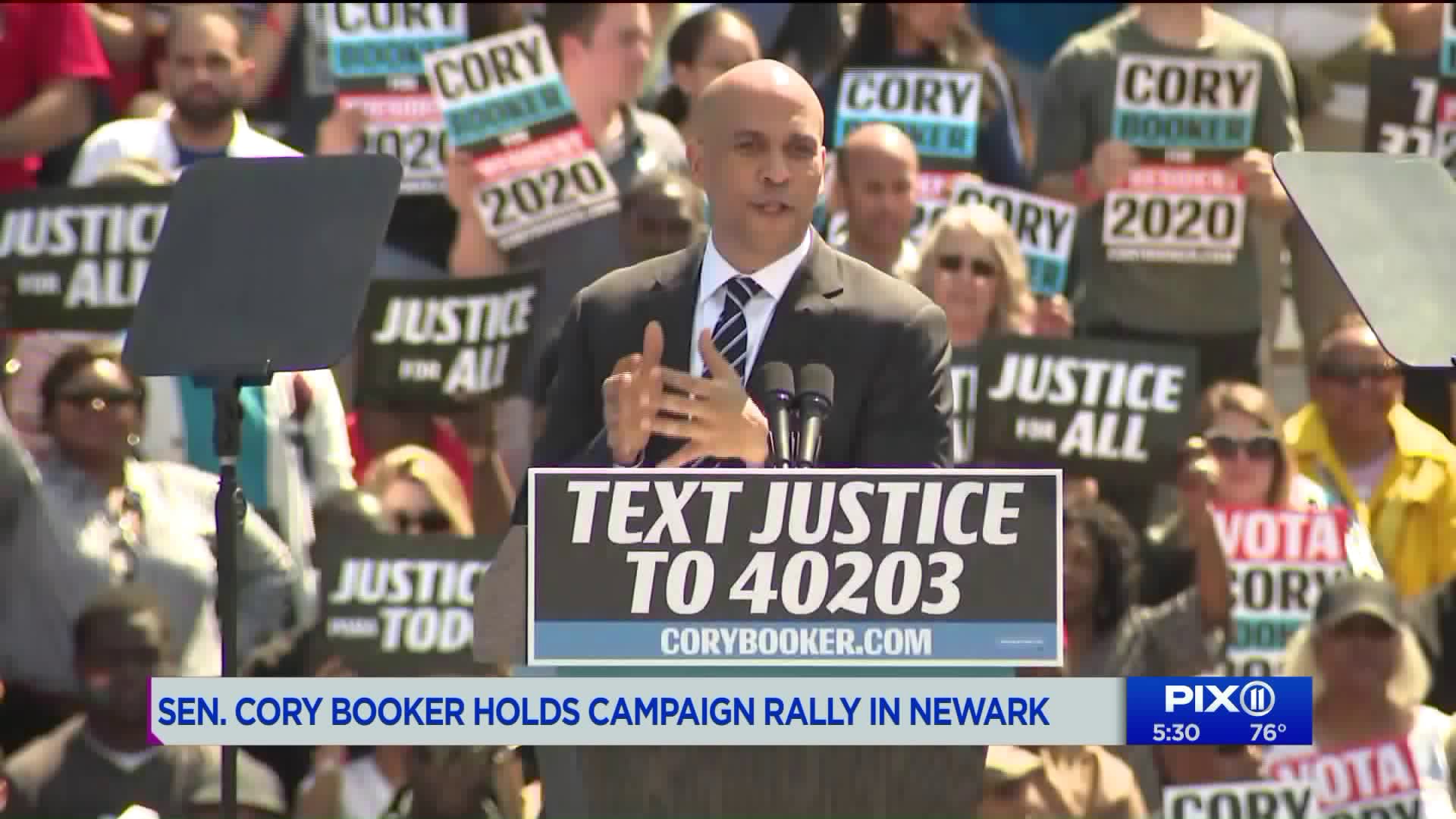 Democratic presidential hopeful Cory Booker launched a national campaign tour Saturday with a major rally in the New Jersey city where he served as mayor, as he looks to break out of a crowded 2020 field of more than a dozen viable candidates.

NEWARK, N.J. — Democratic presidential hopeful Cory Booker launched a national campaign tour Saturday with a major rally in the New Jersey city where he served as mayor, as he looks to break out of a crowded 2020 field of more than a dozen viable candidates.

The senator from New Jersey has made visiting early voting states a priority during his 10 weeks in the presidential race, but so far he remains in the middle of the pack with poll numbers in the single digits. Still, his campaign is projecting confidence that he doesn't have to surge early to succeed with a strategy that's built more on grassroots enthusiasm than national buzz.

"We're trying to win the election — we're not trying to win a news cycle," campaign manager Addisu Demissie told reporters this week, describing his approach as "organize and get hot at the end."

Of course, Booker and his advisers know that building a higher profile requires some bigger swings for attention that spotlight his talent for soaring oratory. Saturday's rally before a friendly crowd in Newark gives the campaign a chance "to keep Cory front and center with the voters, which is how you break out here," as Demissie put it. "You need to be visible."

Booker's campaign offered few details about what he will say at his rally beyond describing it as an opportunity to outline his case to be the Democratic nominee to take on President Donald Trump. Demissie described it as a "framing moment," adding that the former mayor will be "diving deeper into some of the themes" from his speech during the two-week national tour that it kickstarts. His first stops are in Iowa, Georgia and Nevada.

His initial campaign announcement in February emphasized the importance of "common purpose" in politics, a message he's since expanded on to trumpet his successful work on bipartisan measures, such as the criminal justice reform bill that Trump signed last year.

"There are some folks that want to criticize you for getting into the sausage-making, for making compromises and horse-trading, but when I walk around my neighborhood now, folk come out and tell me, 'Thank you for doing that bill,'" Booker told New York-based radio show "Ebro in the Morning" on Friday.

Booker, 49, raised more than $5 million in the first quarter of the year, his campaign said, which is less than higher-polling candidates Sen. Bernie Sanders and former Rep. Beto O'Rourke reported raising in their first 24 hours in the race. That sum ranks Booker behind at least six contenders, including South Bend, Indiana, Mayor Pete Buttigieg, who raked in $7 million.

But Booker, who ended 2018 with more than $4 million in his Senate campaign coffers, doesn't need a lot of money to leverage his skill at winning over crowds.

Heather Bowie, a 46-year-old woman who saw Booker speak last weekend in New Hampshire, said what she likes about Booker has less to do with his policies than his attempt to build a sense of community.

"His whole thing about unity? I believe him," she said. "I believe him. He's building a community this way."

Symone Sanders, a Democratic strategist not affiliated with any 2020 campaign, predicted that Booker could even "afford to wait until the debate stage and have a breakout moment."

"If he doesn't have a national breakout moment tomorrow or on this tour, that doesn't mean he won't catch fire down the line," said Sanders, who serves as a senior adviser to the Democratic group Priorities USA. "I do think there are people who are resonating with his message. He's just not the person on national television every week."