Scaffolding collapses onto vehicles in Greenpoint 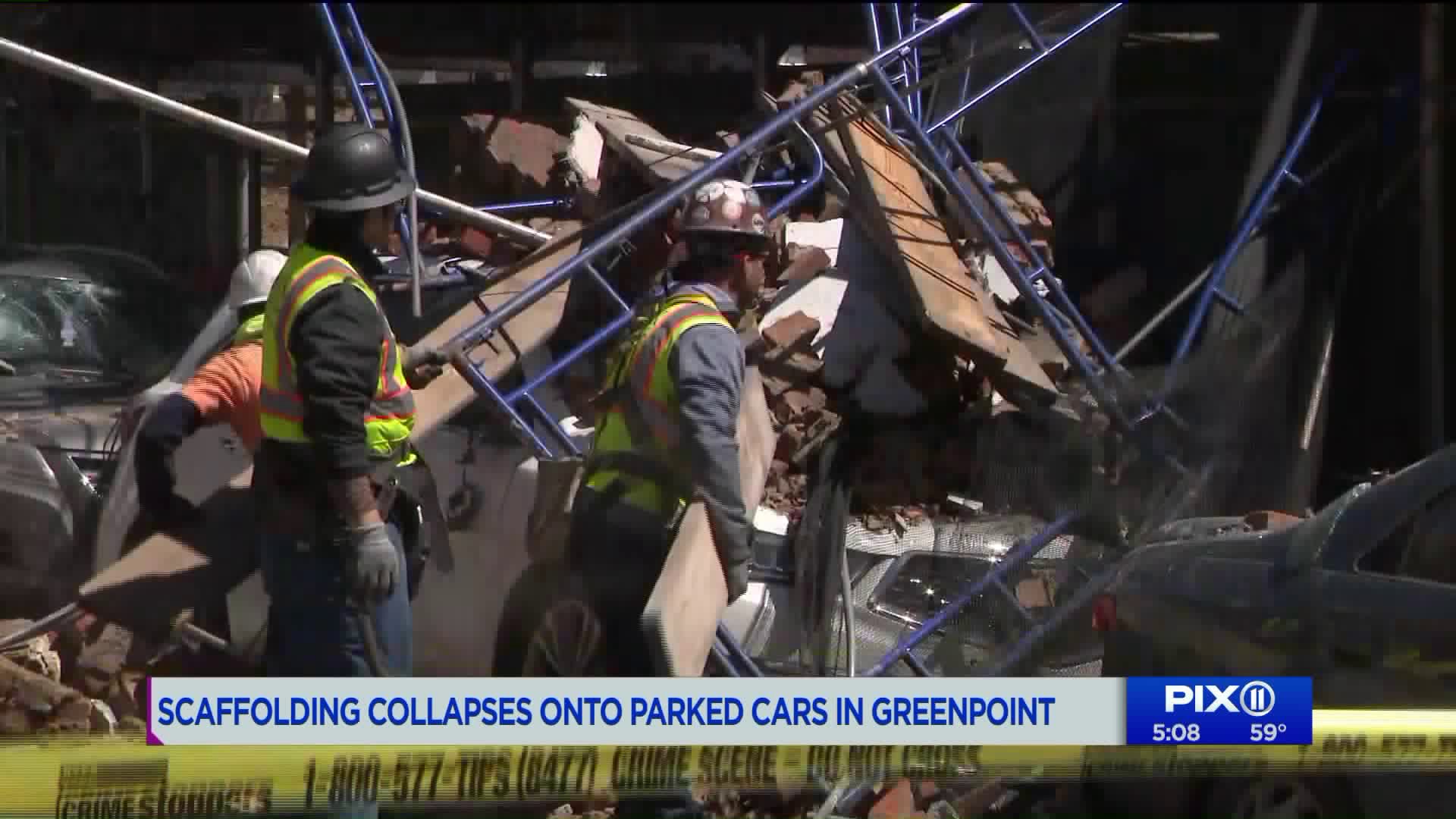 Vehicles were hit by falling scaffolding that caused a partial wall collapse in Brooklyn Wednesday morning, according to FDNY and video at the scene. No injuries have been reported, FDNY officials said.

GREENPOINT, Brooklyn — After part of a building, as well as dozens of sections of steel scaffolding, fell into the street in Greenpoint Wednesday morning, crushing an SUV and significantly damaging two other cars, witnesses are still amazed that no people were hurt in the collapse.

"It's a busy street," said Julian Foster. "Everybody walking back and forth, jogging and all that," is how he described the block of Wythe Avenue, between 13th and 14th Streets.

Foster's vehicle, a 2017 Acura MDX sport utility vehicle, ended up under hundreds of pounds of bricks, metal and glass when a wall and scaffolding from the two-story building under demolition at the northeast corner of Wythe and 13th came crashing down around 9 a.m. Even though  it's a busy bicycle and pedestrian route, nobody happened to be passing by at the moment the wall came tumbling down.

"My buddy came in and told me, 'You gotta see,'" said Nigel Joefield, another owner of a damaged car at the scene. "'The scaffolding fell down on your car,'" his friend told him, at another construction site across the street. "I was like, 'What?'" Joefield said.

The collapse remains under investigation by the city's Department of Buildings (DOB), but it did issue a violation to the demolition company operating the site for failure to safeguard. Excavation Consultants of NY, Inc. is listed as the general contractor for the site. PIX11 News contacted the company for comment, but it has not responded.

A large construction vehicle, called an excavator, was in operation demolishing the wall when the collapse happened. The DOB also issued a stop work order, but by late afternoon, demolition work continued at the site, including operation of the excavator.

Also late afternoon Wednesday, the owner of one of the damaged cars was able to drive it away. Nigel Joefield said that he was taking his sedan to a repair shop. His front windshield was severely cracked; his rear windshield was missing and both of his side mirrors had been ripped off, as had most of his rear bumper, in addition to various dents and scrapes.

Foster's Acura SUV was in far worse shape. It was immovable after the ceiling partially collapsed. Its skylight was gone. Its hood was crushed in. Its front windshield was shattered into shards, and there were numerous other points of damage.

One other vehicle, a 2008 Volkswagen Tiguan, also had a crushed front windshield, a ripped off side mirror and other damage. Its driver, who only gave his first name, Adrian, said that it was the first car he's ever owned.

"You feel bad, because I paid all this money for this car, and it's a car I use it every day," he said.