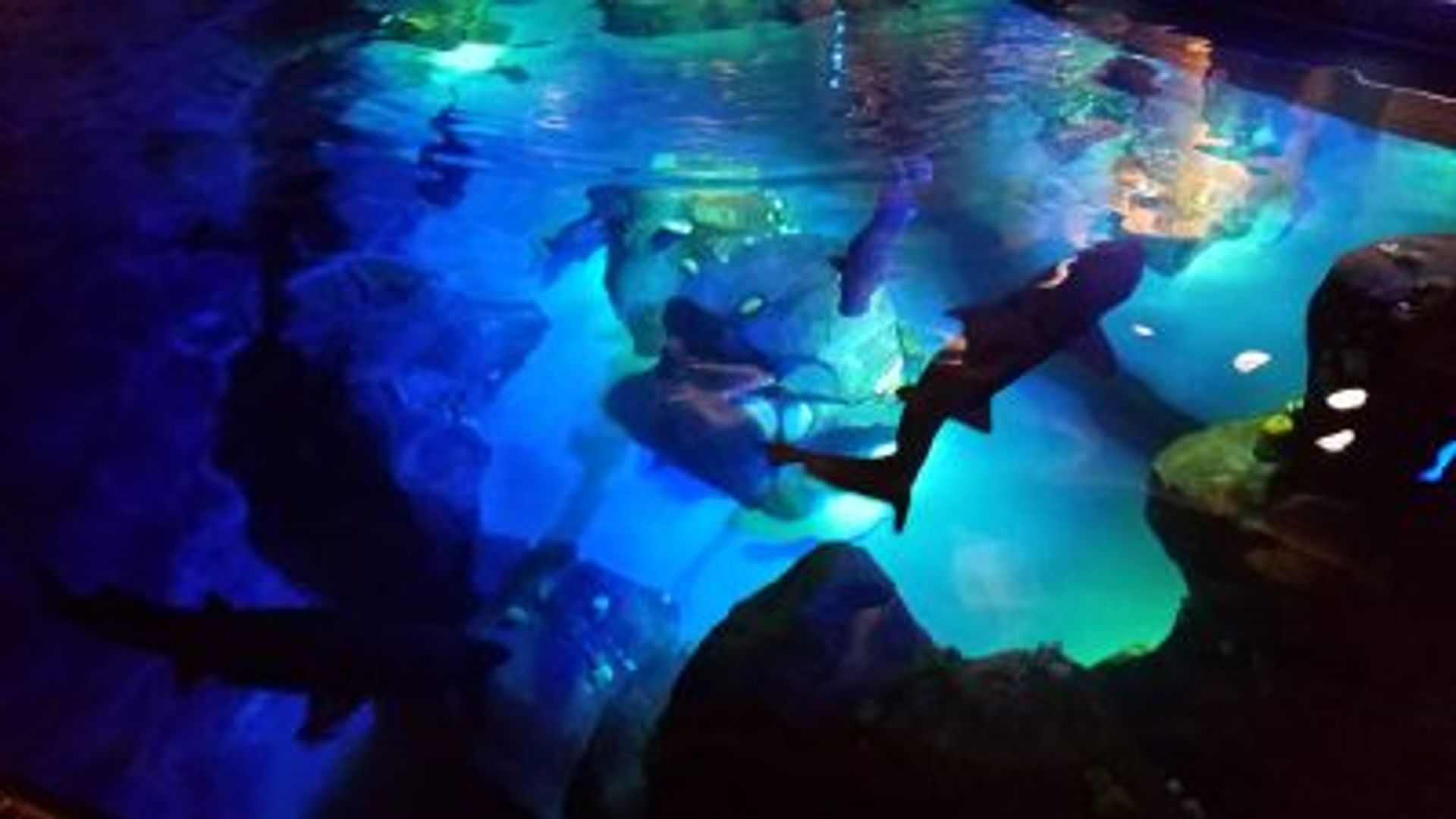 CONEY ISLAND, Brooklyn — Shark fins cut through the water from just a few feet away, but as they get closer, it's cause for excitement and not terror at the New York Aquarium's Ocean Wonders: Sharks! Behind-the-Scenes Tour.

Visitors usually press close to the 9-inch thick acrylic tank wall as sharks, fish, a loggerhead turtle and a stingray - named for blues legend Ray Charles- swim by. There's a bird's eye view of the marine creatures in the special tour, which is an option at the aquarium's first exhibit to open since Hurricane Sandy devastated coastal Brooklyn in late 2012.

Several exhibit elements are designed to give visitors a different perspective on sharks. A transparent, floor - level tunnel surrounds those who crawl in with water on three sides. Adults can easily fit, but may scurry out when an eager child scoots in to watch the fish swim around them.

Visitors enter through the mesmerizing coral tunnel. Fish and sharks swim above you and the curved tank creates the optical illusion that the marine life is even closer than it actually is.

More than 9,000 people walked through that tunnel on the exhibit's opening day in June of 2018. It was a hot day and the lines were long, Stephanie Joseph, curator of education at the aquarium, said.

"As they walked into that coral tunnel, everyone's eyes lit up, the kids were going 'wow' and even the parents were really excited," Joseph said. "That was that moment that made me understand that this is a fantastic place to be and I'm so happy to be here."

There are 16 species of shark and ray in the exhibit and more than 115 other species of marine life.

Many of them can be found in Hudson Canyon, where groups can actually sleep overnight.

Large sharks, including the sandbar, sand tiger and nurse, swim by along with Atlantic sturgeon so big they could almost be mistaken for sharks.

"It's really one of the most peaceful and beautiful sights that you can see," Joseph said.

Above Hudson Canyon on the behind-the-scenes tour, visitors can learn more about what keepers do: how they train the sharks, feed them and get them into the tanks to begin with. They can also watch as the sharks are fed, which happens three times a week.

The VIP tour also includes a touch tank featuring epaulette sharks and whitespotted bamboo, along with star fish, sea urchins and a conch.

"So [it's]  a really neat thing to feel the scales on the shark," Joseph said. "It kind of feels a little like sand paper when you're touching them."

Visitors who don't want their hands anywhere near a live shark's mouth can get up close and personal with their teeth at a model station depicting different types of teeth.

There are also rooms featuring information on shark reproduction and biology. The exhibit has a special focus on sharks found off the coast of New York. Touchscreen monitors bring up information on various species.

The last thing visitors do is walk through a room about ocean conservation efforts.

For more information about ticket prices at the aquarium, click here.

For more information about the Sharks After Dark Overnight experience, click here.