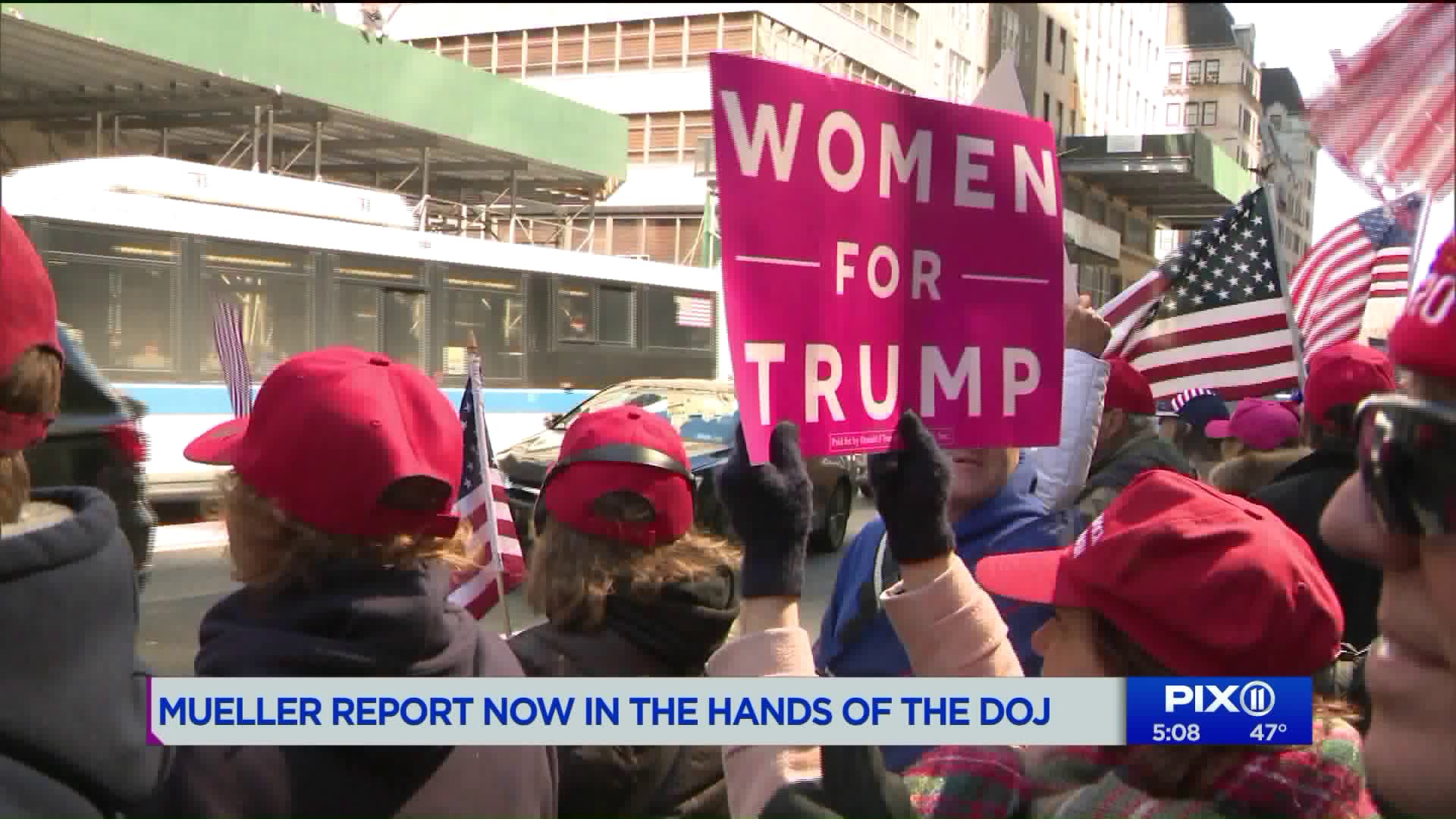 Special counsel Robert Mueller`s report is now in the hands of Attorney General William Barr. While lawmakers across the country speak out saying the report should be made public, a pro-Trump rally occurred outside Trump`s building in Manhattan on Saturday.

House Democrats, anxious about how President Donald Trump's Justice Department will handle the release of special counsel Robert Mueller's findings, are demanding the full report and underlying evidence be publicly released and are warning they may use their subpoena power to get the information.

On a conference call with members Saturday, House Speaker Nancy Pelosi said that she would reject a classified briefing for the congressional intelligence leaders known as the "gang of eight" to convey information about Mueller's report, arguing that lawmakers must be free to discuss it publicly, according to a person on the call.

A day after the Justice Department announced that Mueller delivered his report to Attorney General William Barr, Democratic leaders circulated talking points to their members arguing that "the White House must not be allowed to interfere with the report's release."

The talking points include details about why they believe there's precedent supporting the release of a report, pointing to the hiring of a special counsel in 1999 to investigate the 1993 incident in Waco, Texas. They also point to precedent involving the Justice Department providing 880,000 pages of internal material last year to the House as part of the GOP probe into the FBI's Hillary Clinton investigation -- as well as the department providing records to the Hill over the Watergate probe.

"If necessary, Democrats would be prepared to use its subpoena authority to obtain the full report and underlying evidence as well as to obtain briefing and testimony from the Special Counsel, the Attorney General, Deputy Attorney General and other necessary officials," the talking points said.

On the call, Democrats argued that the public will is overwhelmingly on their side for full transparency, pointing to public opinion polls to make their case.

"Right now, we are in the mode (of) wanting to know the truth, wanting the facts so that our chairpersons and members of the committees can take a look into this going forward," said Pelosi, according to the person on the call.

Six committee chairmen who are all running congressional investigations into the Trump administration, White House and Trump's businesses, all spoke briefly on the call, according to the source, along with House Caucus Chairman Hakeem Jeffries.

The Democratic chairmen reiterated their argument that releasing both the report and underlying evidence had precedent, pointing to the Justice Department providing Congress with investigative documents as part of Republican-led probes in the last Congress.

The call lasted roughly 35 minutes and more than 120 lawmakers participated, the person said.

This story has been updated with additional developments Saturday.