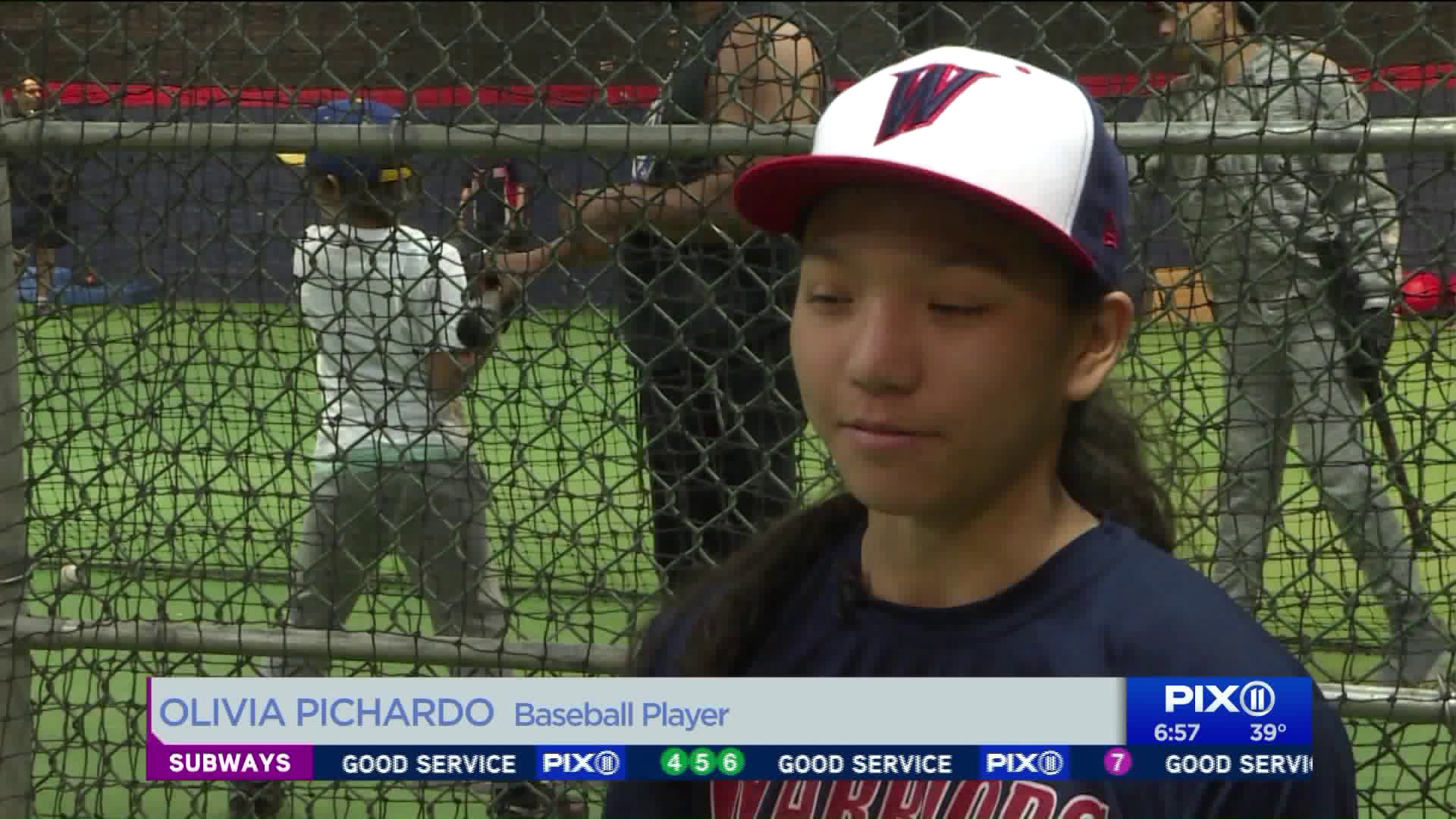 The Queens native is catching the attention of Major League Baseball and striking out the competition. She practices at The Cage in Queens, and plays on the Warriors travel team. This month Major League Baseball recognized Pichardo`s accomplishments on the diamond by inviting her to participate in MLB Grit.

Forget "A League of Their Own", Olivia Pichardo is perfectly comfortable playing with the boys.

The Queens native is catching the attention of Major League Baseball and striking out the competition. Pichardo's parents put a ball in her hand the minute she started walking at 8 months old. By 4 or 5 she started playing baseball with her dad.

"We played at home," father Max Pichardo said. "The first bat was the Spider-Man bat, the plastic one. So she would just hit the ball in the apartment. I saw she had a nice swing, so I said we have to go and play."

Olivia joined her first team when she was 6.

At the time the team was half boys and half girls. Two years later, she was the only girl left on the team. Many of those around her started counting down the innings until she would switch to softball.

"It can be a little irritating," Pichardo said. "I mean, don't get me wrong, softball is a great sport, but I'm choosing to play baseball."

Those who saw her play could tell she was different.

"She would get in front of balls that I would smoke at her," said Coach Jesse Friedman. "Other boys would just back away or turn their face."

Pichardo practices at The Cage in Queens and plays on the Warriors travel team.

"I wasn't expecting too much, but she turned out to be one of the better players on the team," said former teammate Wyatt Rodriguez.

"We consider her a Warrior, not a female or a male," said Coach Wil Collazzo.

She says she even gets support from parents on the other team.

That's before she strikes out the woman's son.

"Every time you hear, 'strike three' it always feels so good."

In seventh grade she started playing varsity baseball at the Garden School in Jackson Heights.

Two years later she's dominating on the mound and at the plate.

This month Major League Baseball recognized Pichardo's accomplishments on the diamond by inviting her to participate in MLB Grit, a baseball camp for several dozen girls from all around the world.

She says when she steps on the field, it doesn't really matter if the players around her are boys or girls.

"We all share the same skill level," she said. "It's just different pitch voices is all really."

A handful of girls have received scholarships to play baseball in college. But with Pichardo, coaches say she's talented enough to write her own ticket.

According to her dad, Pichardo tops out at more than 70 mph on her fastball. She also throws a change up, a slider and she's working on a knuckle curve.

And with recognition from MLB, the teen's mom can imagine a day in the future when women are drafted into the major leagues.

"It gives me hope that I'm actually going to be able to see my daughter shatter the glass ceiling when it comes to sports," Monita Pichardo said.

Next year Pichardo plans to try out for the US Women's National team when she turns 16. If that wasn't enough, she's also a high honors student. So you could say she's knocking it out of the park in every aspect of her life.

"Every girl that plays baseball is a trailblazer," she said.