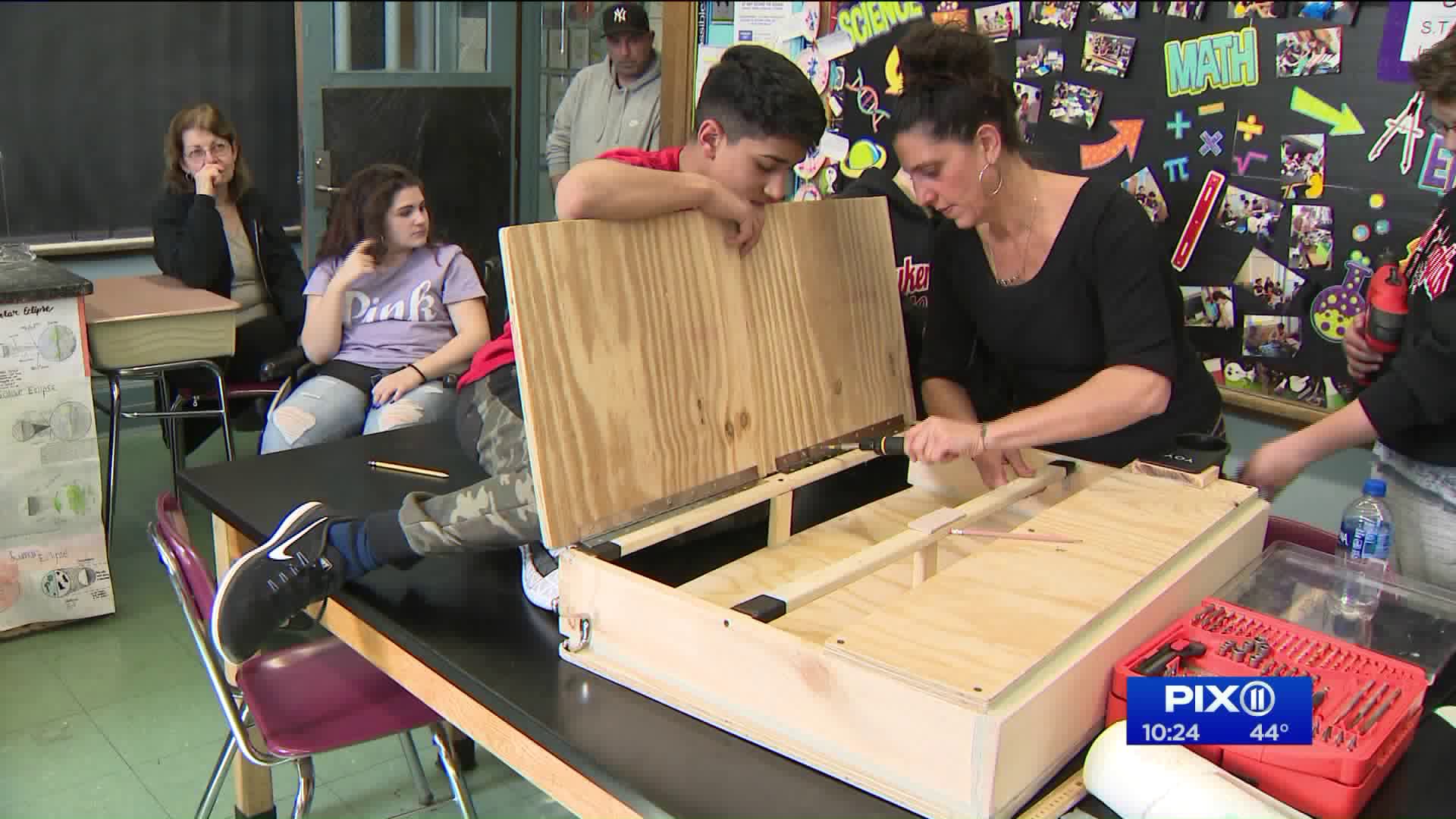 For the last two months, a group of 8th graders from a Dyker Heights school have met twice a week, in their own spare time before and after school, to build an enhanced desk that makes school easier for a wheelchair-bound classmate. They will enter the desk in the annual STEAM Expo later this month.

The kids at Intermediate School 201 are entering the annual STEAM Expo, a competition that promotes science, technology, engineering, arts and math. Their project involves building a desk that makes easier for a wheelchair-bound classmate.

For the last two months, science teacher Cindy Scognamillo and eight of her students have met twice a week, every week; From 2:30 p.m. to 4:30 p.m. on Wednesdays, and 7 a.m. to 8 a.m. on Thursdays. That's two hours after school and one hour before school, all on the students' spare time.

It's more than dedication to a project for the STEAM Expo. It's a labor of love for a fellow student, Maria Pizzo.

"I think it was really nice and caring and that they thought of me and the struggles I went through," said Pizzo.

With the help of her paraprofessional, Pizzo gets from class to class in a wheelchair.

Like all city public schools, I.S. 201 has elevators, ramps and wheelchair-accessible desks, but the students in Maria's class decided to build her an enhanced desk and enter it in the third annual STEAM EXPO.

"There are wheelchair accessible desks for students but we really wanted to stress on modifications," said Scognamillo. "Modifications [that] can make Maria more independent as a student. She's a teenager. She will going to high school next year, and being independent is part of that transition."

The theme for this year's Expo is solving world problems. "When I noticed Maria's struggle, I thought this was a world problem," said Scognamillo. "It's a problem that people in wheelchairs face everyday. Their life is different. It's just a whole different aspect to their world," she said.

"The planning process started out with brainstorming in my classroom. They researched handicapped desks, we spoke to Maria and said, 'Is there anything you can think of that you might want?'"

The desk is modified to fit Maria's needs. A panel that tilts up where she can place an iPad or book, a water bottle holder, and a hook that makes her knapsack more reachable, instead of keeping in on the back of her wheelchair. Scognamillo bought the wood and other supplies from Home Depot and the group got started.

"In the beginning it was just two big pieces of wood. Now it's more than that. [It's] a fully built desk that helps someone with their struggles, especially Maria because she's in a wheelchair," said Dominik Oravecz.

"It's been a lot of fun working with my friends on this project in trying to help Maria get a better sense of independence," said Evan Meredith.

The students sketched the design and have been involved in building every step of the way. Whether they win or lose at the competition, Scognamillo says she's already gotten the best reward as an educator.

"To me, I already won," said Scognamillo. "It's been so rewarding because Maria's so happy that there's positive attention drawn to her, and the students care so much. They've been so compassionate."

The District 20 STEAM Expo will be held on March 28 at I.S. 227 Shallow Junior High School in Brooklyn and 38 different schools are participating.