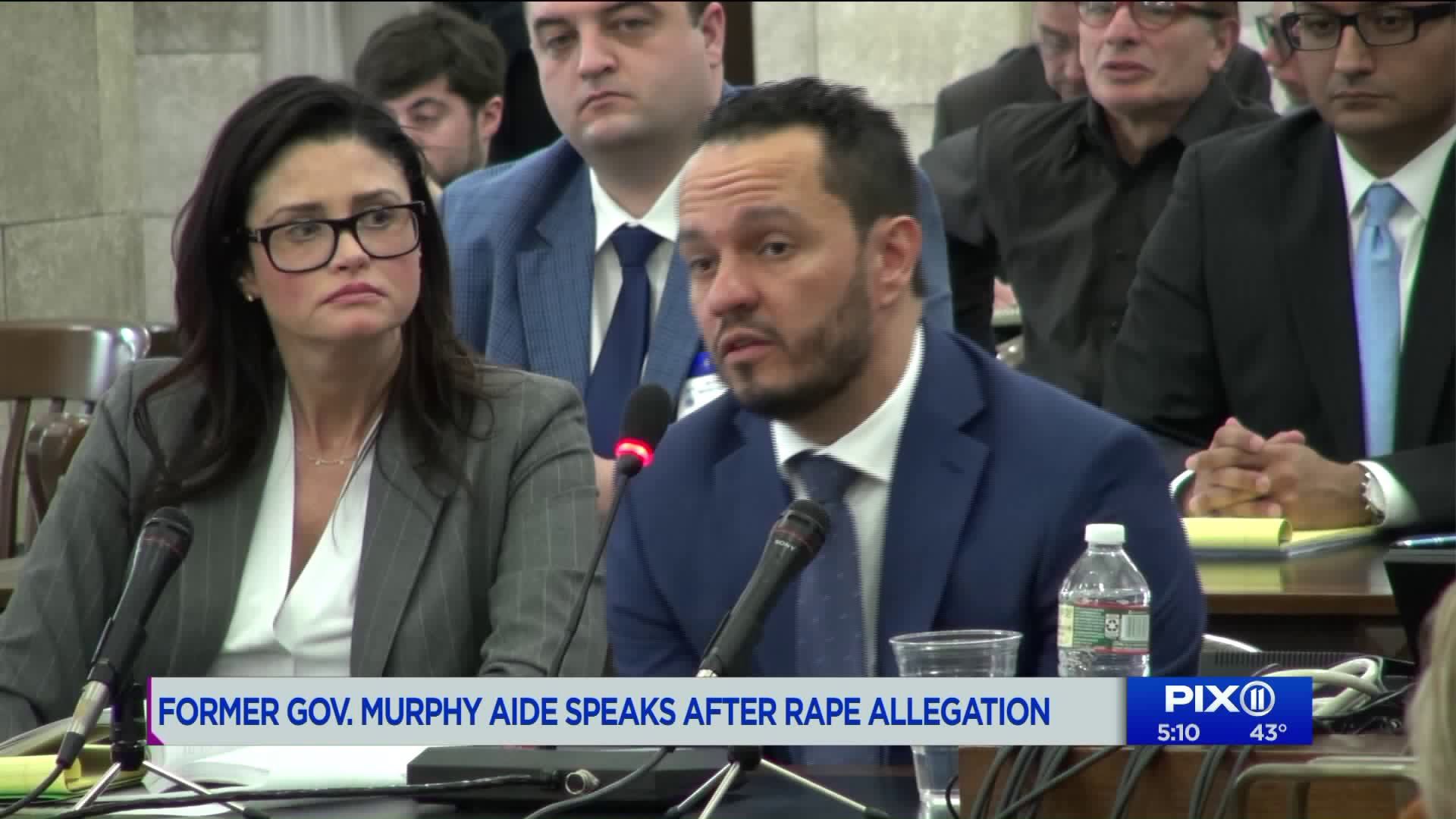 Albert Alvarez, former chief of staff at the New Jersey Schools Development Authority, denies rape allegations made by Katie Brennan, a current aide to New Jersey Gov. Phil Murphy. Brennan alleges that Alvarez sexually assaulted her while they were both working to get Democratic Gov. Phil Murphy elected in 2017.

TRENTON, N.J. — A former New Jersey government official told a legislative hearing Tuesday that he has been "falsely accused" of sexual assault by another state worker.

Albert Alvarez was chief of staff at the state Schools Development Authority until October when a newspaper published an account from Katie Brennan alleging that he sexually assaulted her while they were both working to get Democratic Gov. Phil Murphy elected in 2017.

Tuesday's testimony under oath that came after a subpoena was issued. It marked the first time Alvarez publicly commented about the episode, which captured officials' attention in the Statehouse and led to the formation of the committee probing Alvarez's hiring. Both Brennan and Alvarez have filed lawsuits and Murphy was led to conduct an internal review of his hiring practices.

"I stand by my previous statement that I have been falsely accused," Alvarez said, reading a statement at the start of the hearing. "These false allegations have devastated my career and have brought an emotional toll on myself and my loved ones."

Lawmakers have said that the hearing would focus on hiring and not the criminal allegations. Attorneys hired at public expense by legislators questioned Alvarez for hours.

The potential for a bombshell revelation about who hired him — a question that eluded legislators for months and produced inconclusive responses from Murphy administration staffers — fizzled after an attorney asked Alvarez who hired him.

"I couldn't tell you," he said after repeated attempts at getting clarity.

Lawmakers focused on who hired Alvarez because they said it was odd that after months of testimony no one in the Murphy administration could pinpoint who had hired him. At one point during the hearings, it seemed as if Alvarez, a former Murphy campaign staffer, might have hired himself.

Jose Lozano, Murphy's transition chief had testified that Alvarez told him he'd be working at the schools authority. This prompted incredulous responses from lawmakers who asked whether Alvarez hired himself, but Lozano later said he believed either Murphy's chief of staff or counsel approved the hire.

Alvarez said he had at least a pair of conversations with incoming chief of staff Pete Cammarano and Lozano about the position and salary. Lozano and Cammarano had testified earlier and couldn't pinpoint either who officially hired Alvarez.

Brennan came forward with her story in the Wall Street Journal after first informing Murphy transition and administration officials. She has said she decided to detail her allegations publicly when she learned Alvarez was still in state government after she was led to believe he was leaving.

In January, Brennan sued the state and Alvarez, seeking to scrap the state's policy requiring victim confidentiality in cases like hers. Alvarez last week filed a suit of his own, asking for and winning an order from a judge seeking prosecutors' documents.

In February, Murphy announced changes in how the state handles sexual misconduct allegations, applying them to people who work for the governor in the transition period, as well as new job applicants.