Meet the mystery balloon man of the West Village 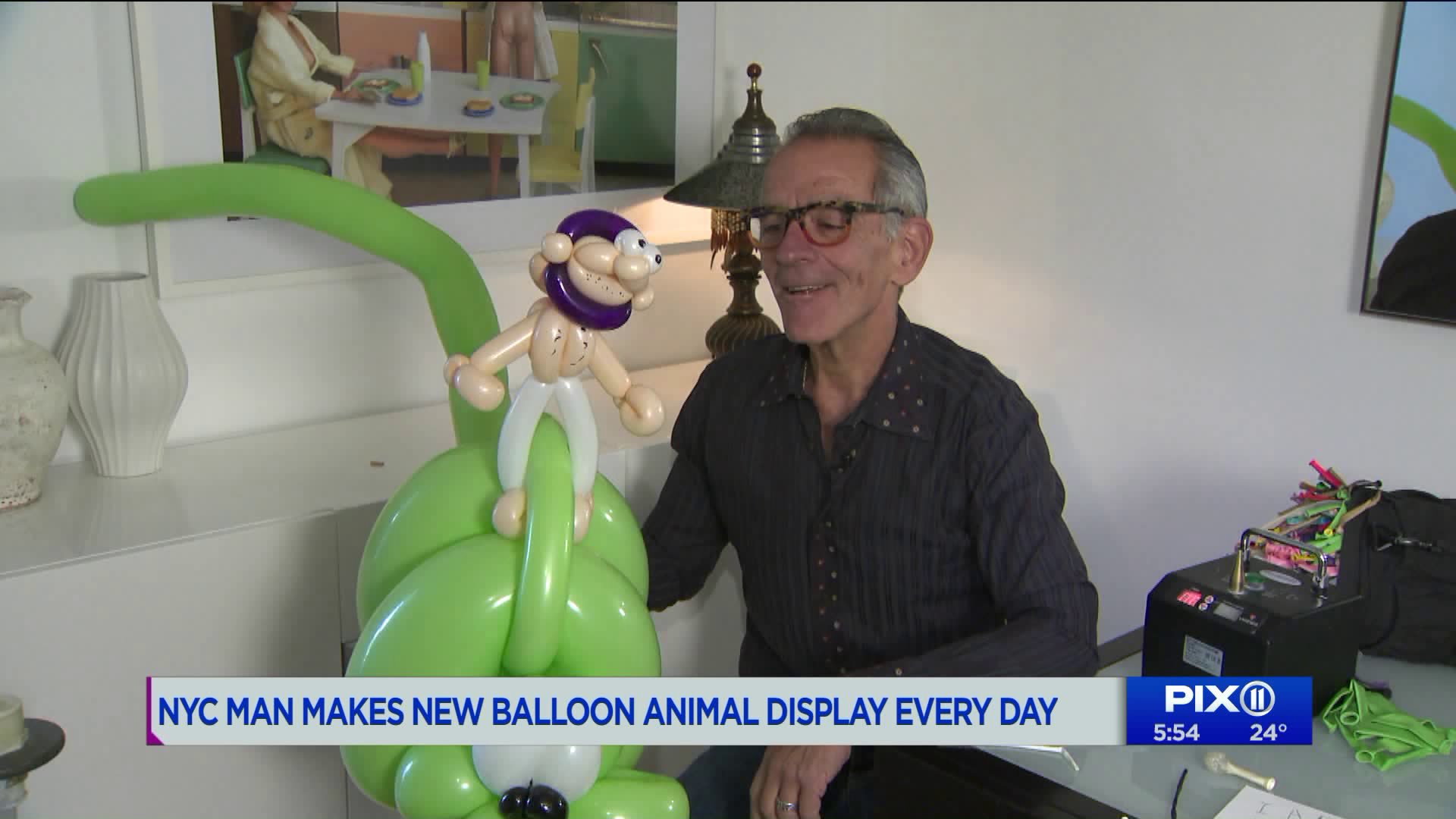 He makes elaborate balloon sculptures, climbs building scaffolding and ties them up. The retired electrician is known to his friends as "Balloon Banksy."

WEST VILLAGE, Manhattan — Most mornings there’s an inflated sense of excitement at the corner of Leroy and Hudson in the West Village.

Dozens of children headed to class routinely stop and stare.

There's a big balloon sculpture dinosaur being ridden by a caveman.

The dinosaur is just one balloon sculpture of many.

“I walk out each morning and look to the right and each day there’s a beautiful new piece,” said Mark Ghuneim, a West Village Resident.

“Half of New York is comprised of scaffolding so I guess it takes away from the scaffolding,” Suggs said about the balloon cats, Jedi, unicorns and other random objects hung every morning. “It’s like a guessing game, a game of charades everybody’s trying to figure out what it is it today.”

At around 8 a.m., Joel Klein, known to friends as “Balloon Banksy,” gets off the elevator, walks past Suggs, and keeps the public waiting no more.

The retired electrician carefully ties the balloons to the scaffolding, snaps a few pictures for his Instagram page, and carefully cuts down the previous day’s work.

Often times he gives the balloon away if it’s still in decent shape. Back up in his apartment, Klein showed PIX 11 his creative process.

After a bit of research, it usually takes only about 15 minutes to do his daily design. He’s generally sprawled out on his bed with a show on TV.

While recreating the dino, Klein reminisced about how his hobby of 40 years grew from simple designs to entertain his children to more elaborate art now. He generally keeps a few balloons in his pocket when he travels and uses them as ice-breakers.

“I get messages from people on Instagram saying their job is miserable. They look forward to walking by and seeing the balloons hang up,” he said.

Klein has never made any serious money from balloon twisting— as it’s called— though he’s done demos for fun everywhere from Central Park to the White House to around the world.

“I’ve noticed that handing someone a balloon puts a smile on your face no matter where you’re from because they know there’s nothing expected in return. A balloon costs me a nickel,” Klein said.

His creative talents extend beyond balloons. Klein designed one of the most recognizable pieces of art that hangs in the 9/11 Museum. He proudly showed PIX11 the replica in his living-room, and one of the many mugs made featuring his wood siding American flag.

However, it is balloons that are Klein's passion project in retirement.

“I just like doing it,” he said. “I love how it makes me feel, and I’m glad it makes others feel good.”