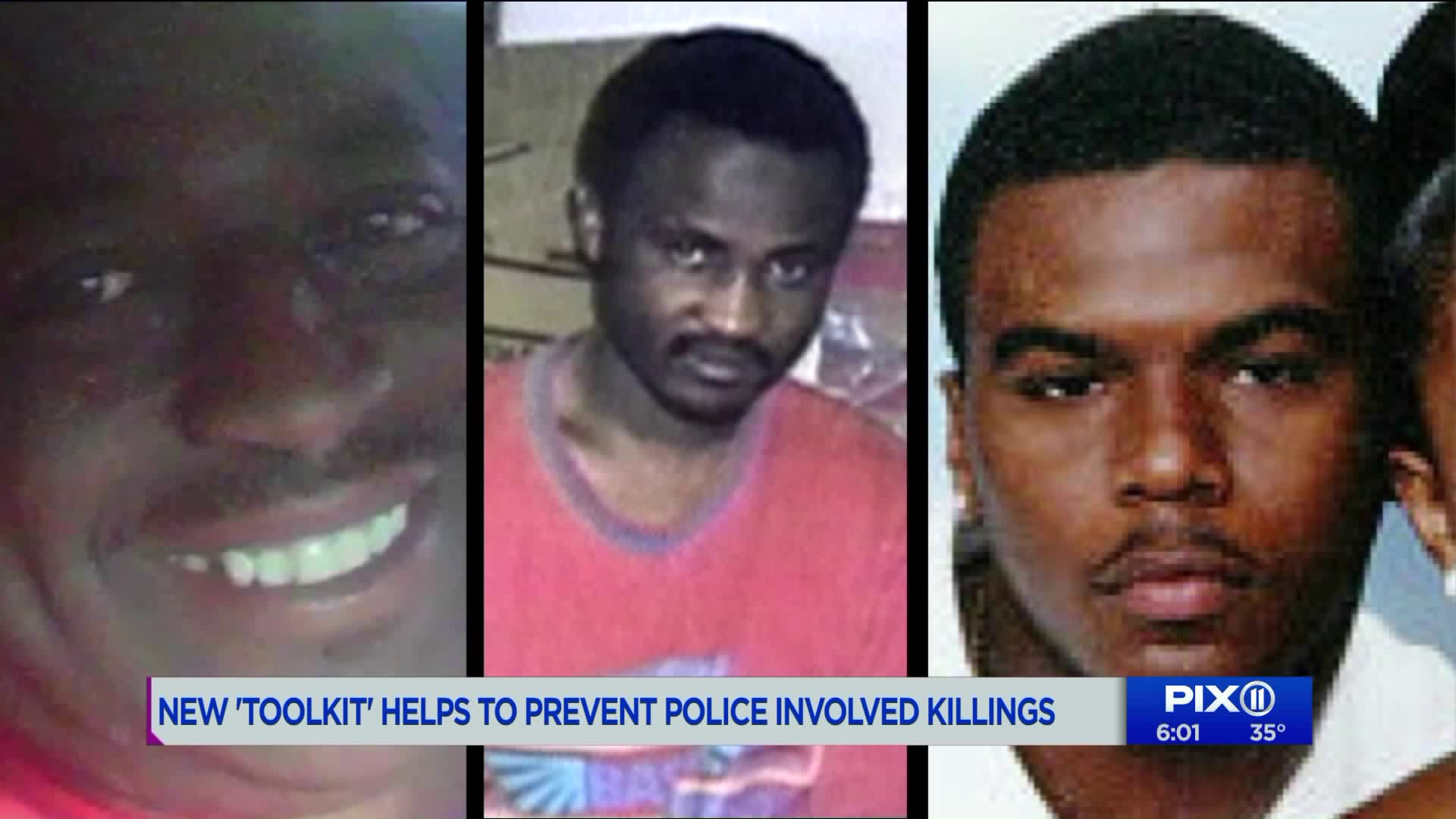 Law enforcement leaders join with families of shooting victims to come up with a guide for police, prosecutors, judges and citizens to help prevent police involved shootings.

HARLEM, Manhattan — It’s a concept that shows consideration for the victims of fatal police actions, and the concept has originated from a source that some victims’ families call surprising: law enforcement professionals.

Prosecutors and police joined with victims’ families over the last year to create a system of guidelines that intends to help reduce, and even prevent, police-involved deaths.

Some of the victims’ names and cases are prominent, and their family members were on hand at the Schomburg Center here for the unveiling of the guidelines, called The Toolkit, at a ceremony on Tuesday morning.

Among the people in attendance were the families of Eric Garner, who died as the result of an NYPD takedown in July 2014; Delrawn Small, who was fatally shot by an off-duty NYPD officer in July 2016; Sean Bell, who was fatally shot by NYPD detectives on the night before his wedding in November 2006; Amadou Diallo, who was killed in a hail of gunfire in February 1999 and Anthony Baez, who died during an NYPD arrest in 1994.

"We have had enough," Castile's mother, Valerie Castile, said at the ceremony.

Standing next to her was John Choi, the prosecutor in the case against Officer Jeronimo Yanez, the police officer whose gunshots resulted in Castile's death.

Both Choi and Castile were among dozens of victims' families, prosecutors and police who drafted the toolkit, and joined together for its release.

"We're not against the police," said Iris Baez, Anthony Baez's mother. "We just want police officers to stand up if they see someone kicking and stomping someone, to say, 'Stop.'"

Baez said she had helped to draft the Toolkit guidelines in an effort to assist police departments screen their officers better for potential problems. In her son's case, the lead officer, Francis Livoti, ended up serving six-and-a-half years in prison for violating Baez's civil rights.

"If the police department takes a look at it, and are willing to take a step toward it, some of it would work,"Gwen Carr told PIX11 News. "This could really help."

Kadiatou Diallo, the mother Amadou Diallo, said that she believes the toolkit will promote justice by helping to prevent more cases like that of her son.

"Amadou lives on when I do work like this," she said in an interview.

Also agreeing that the creation of the toolkit can reduce police-involved deaths, as well as prevent them, was the organizer of the entire effort. Lucy Lang, the executive director of the Institute for Innovation in Prosecution at John Jay College, is a former assistant district attorney in Manhattan. She organized the entire effort and said said that one group of voices, in addition to those of victims' families, has been key.

"It was critical to have police chiefs and police officers as part of this conversation," she told PIX11 News.

The Toolkit is a recommendation for police departments, prosecutors' offices, and courts nationwide. Because it's non-binding, it's unclear how strongly its recommendations will be adopted.

Valerie Bell, Sean Bell's mother, expressed confidence in the guidelines being followed. The reason for her confidence, she said, was her confidence in her and other victims' families' ability to make law enforcement aware of the Toolkit.

The full text of the Toolkit is here .