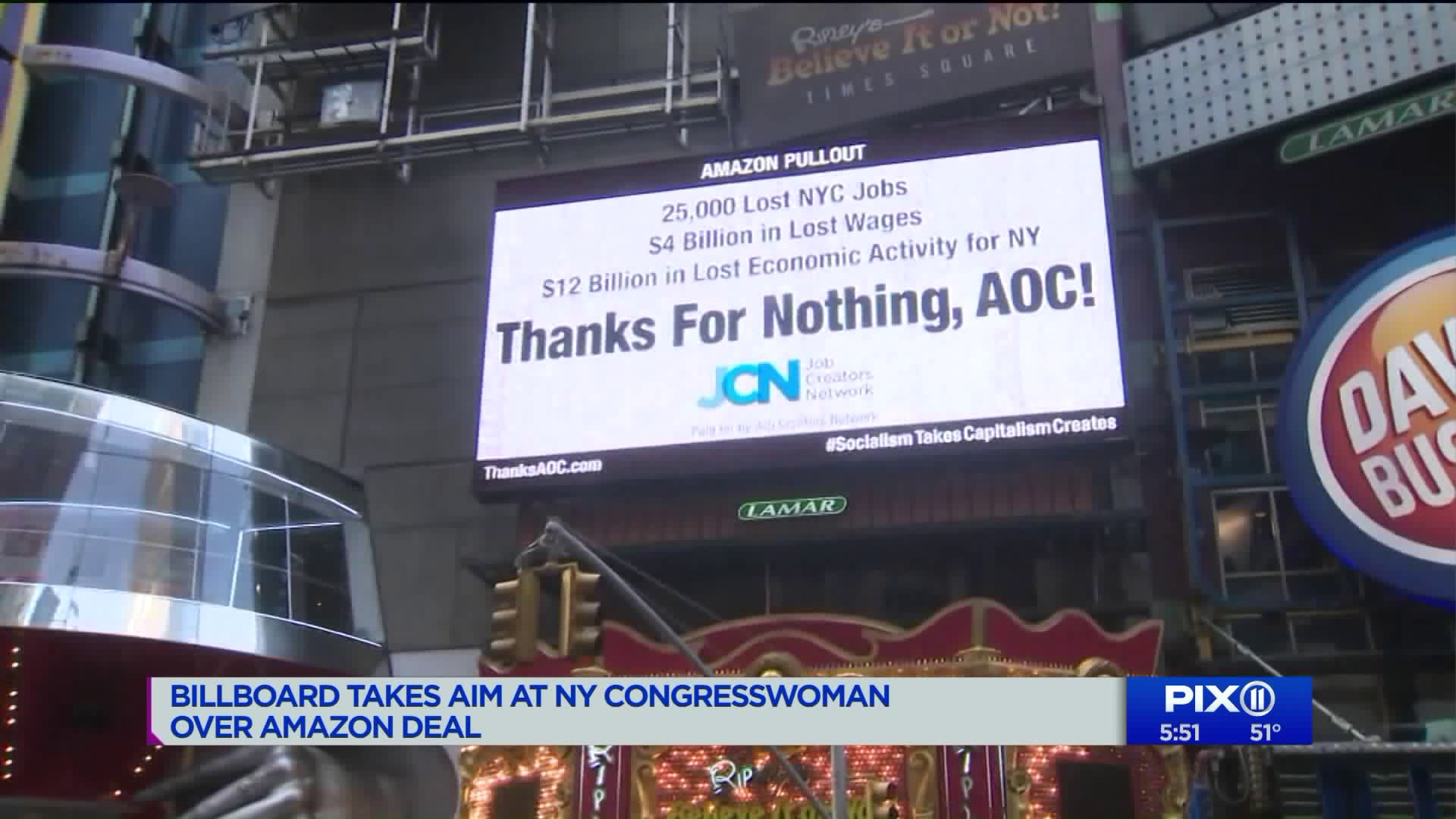 Amazon went back on its plan to build a campus in New York. Ocasio-Cortez`s district adjoins the Long Island City neighborhood where Amazon planned to build its campus, and she was one of the early politicians to voice opposition to the tech giant`s plans.

TIMES SQUARE  — Despite being one of many voices that came out against the now-defunct Amazon deal, New York Congresswoman Alexandria Ocasio-Cortez is getting the brunt of the blame.

A new billboard that went up in Times Square along 42nd Street singles out the freshman congresswoman for costing New York 25,000 jobs and $4 billion in lost wages, among other things.

“Thanks for nothing AOC,” the billboard reads in all caps.

Ocasio-Cortez’ gripe with Amazon - like many critics - was the billions in tax breaks that the corporation was to receive to build its second headquarters in Long Island City.

Ocasio-Cortez, who made her feelings on the deal clear but wasn’t actually involved in it, responded to the billboard on Twitter, calling it “wack.”

She also made a point of noting who paid for the ad - The Job Creators Network - a conservative group based in Georgia that actively lobbies to lower corporate taxes and get rid of business regulations.

At a Thursday demonstration outside a future Amazon distribution center in Queens, elected officials also took note of the billboard’s location.

“They put a billboard in the middle of the center of our tourist industry – I am sure they put it in front of the right audience,” State Sen. Jessica Ramos said of the poorly commissioned ad.

Ever since winning her congressional seat, Ocasio-Cortez has been in the crosshairs of many far-right conservative voices, including Laura Ingraham and Tucker Carlson.

The 29-year-old representative was even listed in an apparent hit list by a Coast Guard officer arrested this week, described by prosecutors as a “domestic terrorist.”

Whether she’s on the receiving end of attacks over her policy or appearance, strategists say if Ocasio-Cortez keeps her eye on the ball, she can overcome the relentless hate.

“They painted them as sort of these folks that are anesthetic to America and the American experience.”

“It’s an old tactic and the truth is, when you consider the overwhelming support AOC receives especially from her constituents, she will be able to weather the storm.”