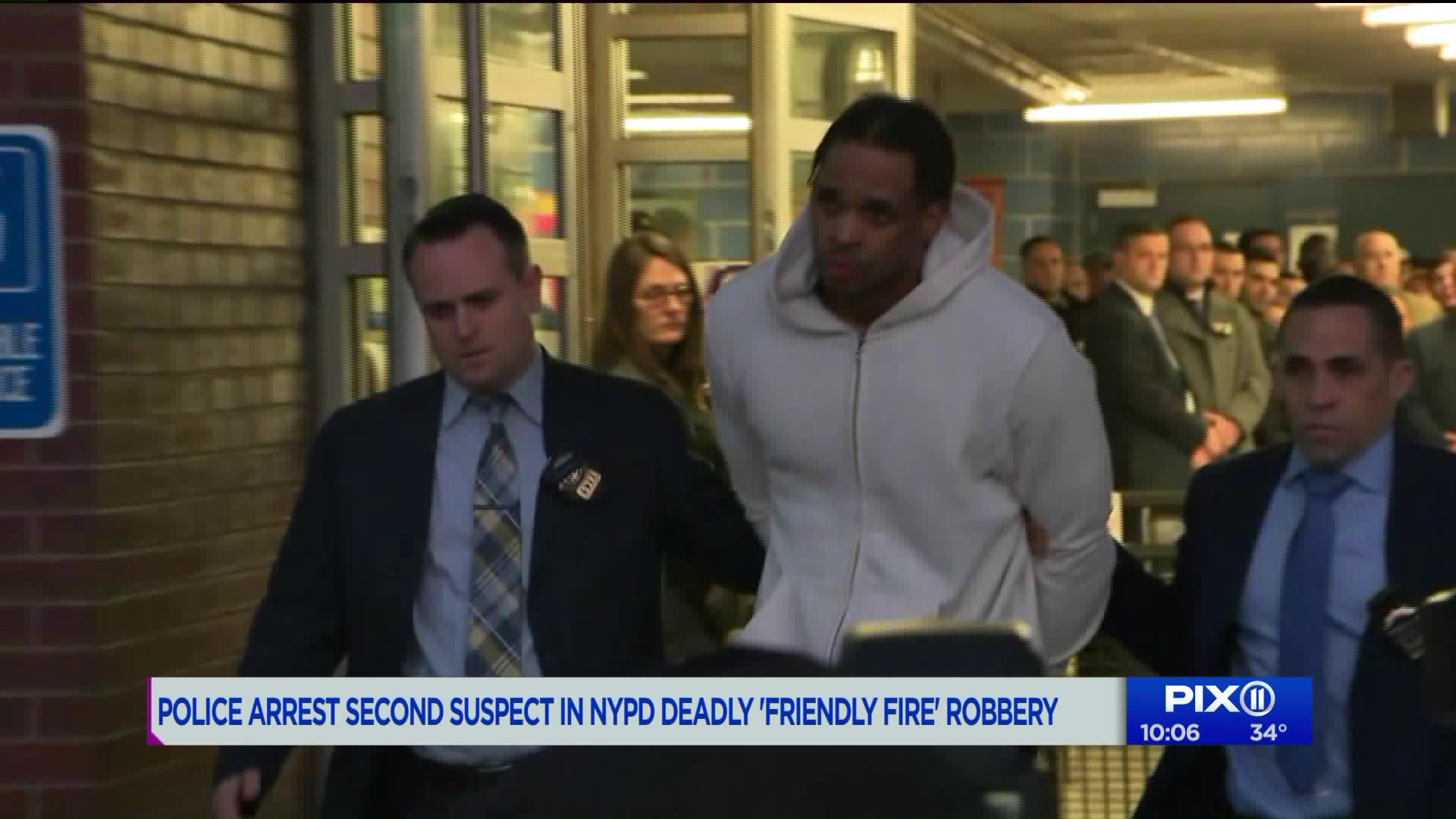 A second suspect has been charged with murder in the friendly fire death of a New York City police detective.

NEW YORK — A second suspect has been charged with murder in the friendly fire death of a New York City police detective.

Police announced charges of murder, robbery, assault and criminal possession of a weapon on Saturday against 25-year-old Jagger Freeman.

Police believe Freeman acted as the lookout in the Queens robbery that led to the death of Detective Brian Simonsen on Tuesday.

Detective Brian Simonsen was hit once in the chest by crossfire as he and six other officers fired 42 shots at robbery suspect Christopher Ransom, who police say charged at them from inside a T-Mobile store pointing a fake handgun.

Simonsen, 42, will be laid to rest next week.

Ransom, who was wounded eight times, was arraigned Friday by video from his hospital bed on murder, manslaughter and other charges.

A judge ordered him held without bail. His next court date is scheduled for Tuesday. Ransom faces up to 25 years to life in prison if convicted.

The Legal Aid Society, which represents Ransom, cautioned people not to "demonize" him.

"The loss of life and the serious injuries suffered by all are tragic," the an indigent defense organization said in a statement. "But we ask the public to respect Mr. Ransom's right to due process and a presumption of innocence."

Ransom, 27, has a long rap sheet and a habit of bizarre stunts, styling himself on social media as a comedian and prankster in the vein of Sasha Baron Cohen of "Borat" fame.

Ransom has been arrested at least 11 times since 2012, records show, and he was wanted by police in connection with a Jan. 19 robbery at another cellphone store. After one arrest, court papers show, Ransom was taken to a psychiatric ward.

Ransom pleaded guilty to criminal trespass and was sentenced to 20 days in jail in 2016 after allegedly climbing over a gate and walking up to a desk at a Brooklyn police station while wearing a fake SWAT vest and police badge. Police records listed his alias as "Detective."

Four years earlier, he pleaded guilty and was sentenced to jail time for pretending to be an intern to gain access to a judge's chambers.

A funeral for Simonsen, a 19-year veteran of the NYPD, is scheduled for Wednesday in Hampton Bays on Long Island, with viewings on Monday and Tuesday.

Simonsen's supervisor and partner, Sgt. Matthew Gorman, was wounded in the leg . He was discharged from the hospital on Thursday.

Simonsen, Gorman and six uniformed officers swarmed to the T-Mobile store at around 6:10 p.m. Tuesday after a 911 caller standing outside reported seeing a man take two employees to a back room at gunpoint, police said.

According to a criminal complaint, Ransom ordered the employees to remove iPhones and money from the cash registers and back room safes.

Simonsen and Gorman, who were both in plainclothes and not wearing bulletproof vests, were working on another case nearby when the call came and arrived around the same time as patrol officers, police said.

Gorman and two of the uniformed officers went into the store, but retreated when Ransom emerged from a back room and came at them, police said. The gunshots blew out the store's doors, showering the sidewalk with glass.

Simonsen stayed outside as Gorman and the uniformed officers went in, police said. Simonsen fired two shots. Gorman fired 11 times. It's not clear who fired the shots that struck them, police said.