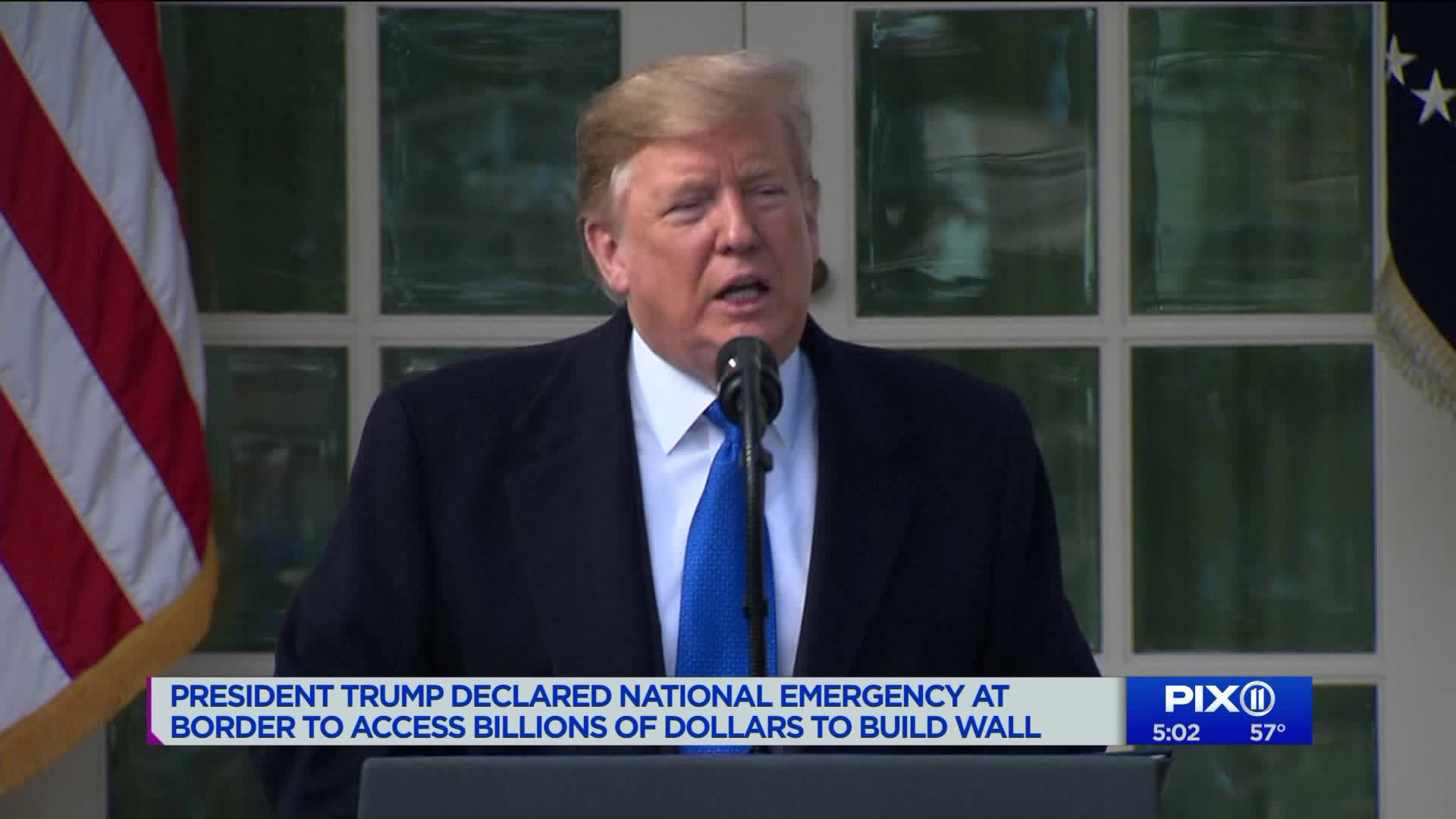 President Donald Trump said Friday he is signing a national emergency to unlock billions more dollars in federal funds that Congress refused to authorize for the construction of a border wall.

WASHINGTON — President Donald Trump said Friday he is signing a national emergency to unlock billions more dollars in federal funds that Congress refused to authorize for the construction of a border wall.

"I'm going to be signing a national emergency," Trump said. "We are talking about an invasion of our country, with drugs and human trafficking."

Through a combination of executive authorities -- some of which require he national emergency declaration -- Trump is aiming to redirect more than $6 billion in federal funds toward the construction of a wall or barrier on the US-Mexico border on top of the $1.375 billion Congress authorized for fencing in the bill Trump will sign Friday morning. If successful, the actions could allow Trump to fund the construction of hundreds of miles of new border barriers.

Democrats will almost certainly challenge the declaration in court, as critics pre-emptively argued that Trump cannot use the national emergency authority to free up taxpayer funds and build the border wall he has long promised his political supporters.

"Declaring a national emergency would be a lawless act, a gross abuse of the power of the presidency and a desperate attempt to distract from the fact that President Trump broke his core promise to have Mexico pay for his wall," Senate Minority Leader Chuck Schumer of New York and House Speaker Nancy Pelosi of California said in a statement Thursday. "It is yet another demonstration of President Trump's naked contempt for the rule of law. This is not an emergency, and the President's fearmongering doesn't make it one."

Several Republican lawmakers also expressed serious concerns about Trump's move to declare a national emergency, concerned about the precedent Trump's move to bypass Congress might set. But Senate Majority Leader Mitch McConnell, who had previously opposed an emergency declaration, said Thursday he would support the move after Trump agreed to sign the compromise legislation to avert another government shutdown.

Trump's move to sign the bill and take executive action concludes three weeks of negotiations between lawmakers over a budget deal. Trump had privately expressed frustration about the negotiations, which amounted to less border-wall funding than he had requested. The agreement included $1.375 billion for about 55 miles of new physical barriers -- based on pre-Trump era designs -- in the Rio Grande Valley sector.

During that time, Trump repeatedly hinted that he was planning to use his contested executive powers to build hundreds of miles of new barriers on the southern border regardless of how the congressional negotiations fared. He repeatedly said he had "set the table" to take action.

For weeks, the President and his top officials had repeatedly argued that there is a "crisis" on the southern border. Democrats pushed against that argument, saying there's no security crisis but rather a humanitarian one.

According to federal data, Customs and Border Protection apprehended nearly 400,000 people along the Southwest border in fiscal year 2018, an increase from 2017 but a decrease from 2016. Many of those apprehended were claiming asylum.

The Trump administration had been actively examining using billions of dollars in unspent Pentagon funds for the construction of a border wall in the event the President declares a national emergency.

A draft proclamation reviewed by CNN last month cited Title 10 of the US Code, which paves the way for Trump to dip into a stash of Pentagon funds that are earmarked for other projects but don't have signed contracts for spending that money.

Congressional aides told CNN that the Defense Department will select which projects to draw from and Congress will not be involved.

"It will be a DoD action. We in Congress will not have a say," they said. "The law doesn't say he has to tell us which project, but you can be sure we will be asking that question."

A national emergency declaration has not gained widespread support among Republicans, who had previously expressed misgivings about using executive power to fund the wall.

Sen. Rand Paul of Kentucky called it a "bad idea."

The national emergency declaration still doesn't guarantee Trump's wall. The administration is expected to face a slew of legal challenges, including from House Democrats and landowners whose property will likely have to be seized to mount barriers.

House Democrats could introduce a resolution to rescind the national emergency and eventually vote on it on the House floor. It would then go to the Senate, where they'd have to vote on it within a certain time frame. Even if it were to pass the Republican-controlled Senate, Trump could veto it.

Watch: President speaks from the Rose Garden, has declared a national emergency.