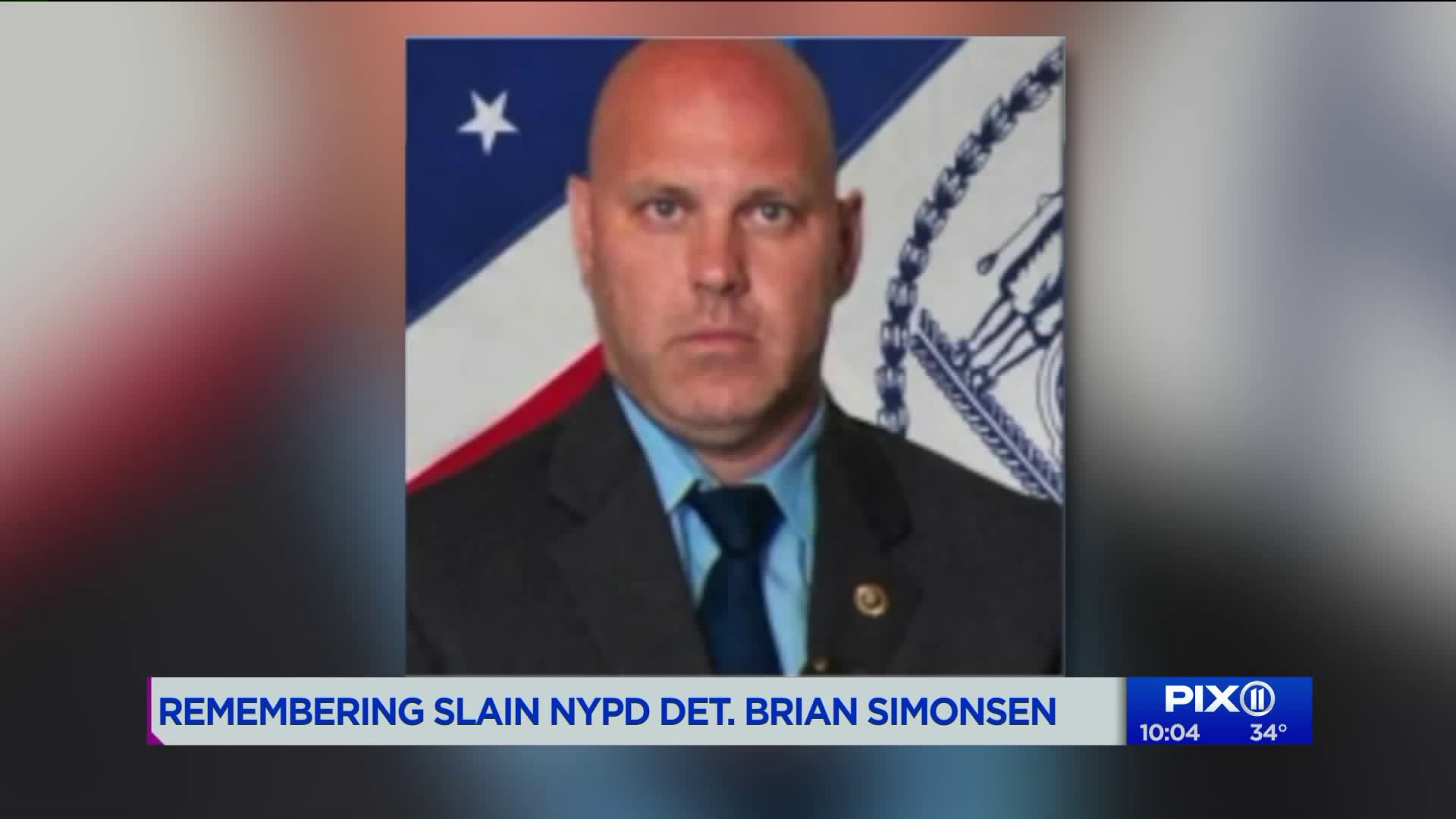 A New York City detective known since childhood as "Smiles" for his bright, welcoming nature died Tuesday night in a hail of police gunfire as officers confronted a robbery suspect who had a fake gun. Simonsen grew up on the east end of Long Island and he and his wife continued to live close by more than an hour`s drive from the 102nd precinct where he worked his whole career. 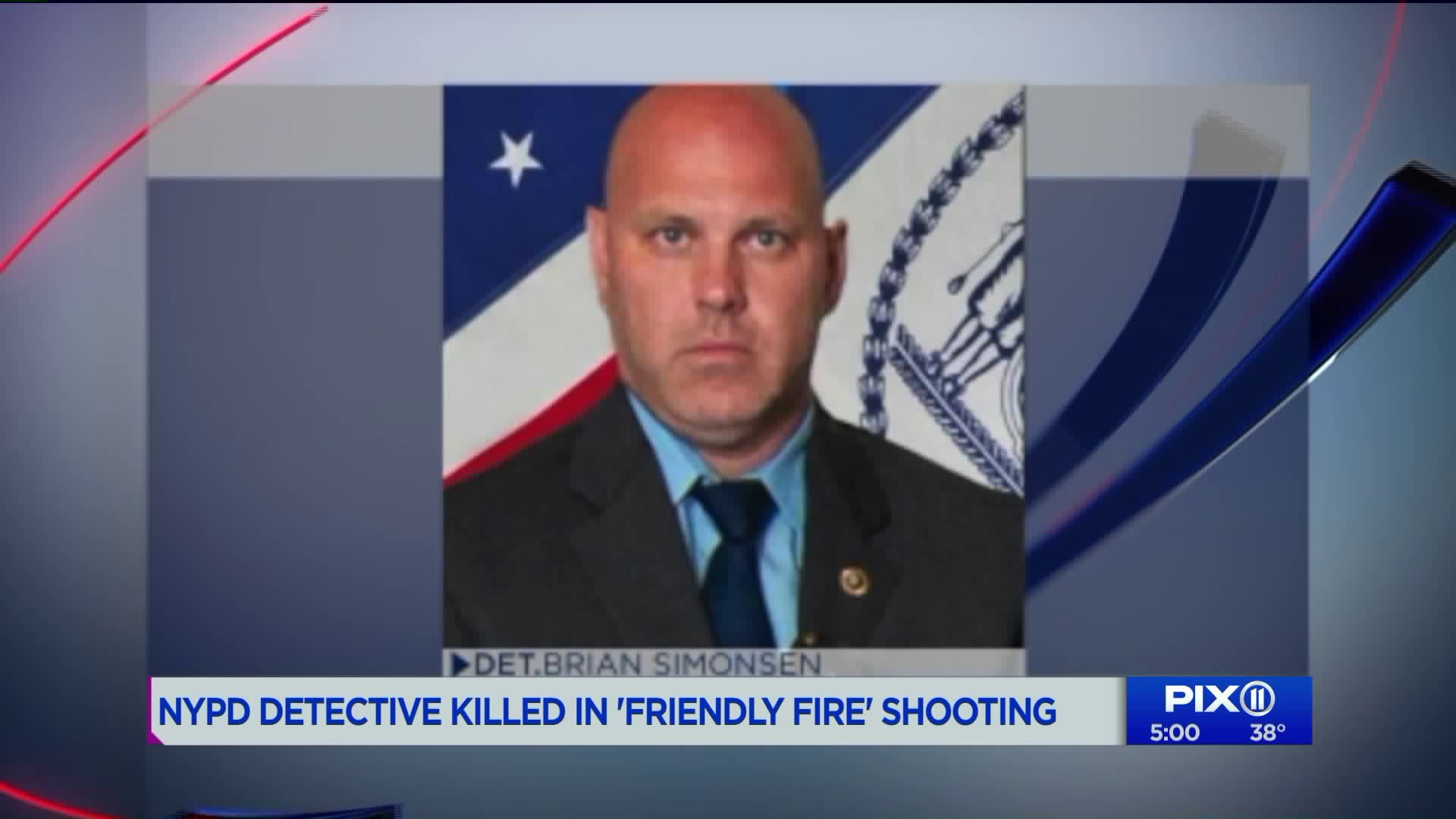 NEW YORK — A NYPD detective was killed by "friendly fire" during the police response to an attempted robbery in which seven officers fired 42 shots within 11 seconds, officials said Wednesday.

The witness also reported Ransom was armed, according to police.

NYPD Chief of Department Terence Monahan tweeted a photo of the suspect shortly after the news conference. While he's in custody, police are asking anyone with more information about him to contact them.

This is Christopher Ransom, the suspect who brandished an imitation gun while robbing the Queens cell phone store where our hero detective was killed last night. He’s in custody, but we want anyone with information about him that might help our investigation to call #800577TIPS. pic.twitter.com/Aoc3Ug3Q6U

Detective Brian Simonsen and Sgt. Matthew Gorman, who were not in uniform, were around the corner for an unrelated incident when they responded to the location. Six uniformed officers arrived at about the same time.

Gorman and two uniformed officers entered the store. As they entered, the suspect allegedly came from the back office and pointed his firearm at the officers.

Seven members of the NYPD fired 42 rounds within 11 seconds, officials said. This is when Simonsen and Gorman were shot.

Detective Simonsen was shot once in the chest and was not wearing a bulletproof vest, according to Maloney,

The suspect, who was also shot, was taken to a nearby hospital. Maloney confirmed all shooting took place outside the store, to the left and right of the main entrance.

Maloney said officers began shooting less than a minute after they first arrived.

According to Maloney, bodycam footage from five of the responding officers, as well as additional surveillance footage from inside a store, are currently under review.

Speaking on the suspect, Monahan said he believes one of Ransom's prior convictions, among many, was for impersonating a police officer.

Officers recovered an imitation firearm at the scene, believed to be what the suspect used in the robbery.

"Make no mistake about it, friendly fire aside, it is because of the actions of the suspect that Detective Simonsen is dead," O'Neill said Tuesday night, after the incident.

Mayor Bill de Blasio and O'Neill met with Gorman at the hospital. The sergeant, who had been with the NYPD for just under nine years, was shot once in the leg.

This is the second time a police officer has been shot by friendly fire in the city in the past three months.

In December, a police officer in Staten Island was also hit by friendly fire as officers responding to a domestic dispute call shot and killed a man carrying a knife.