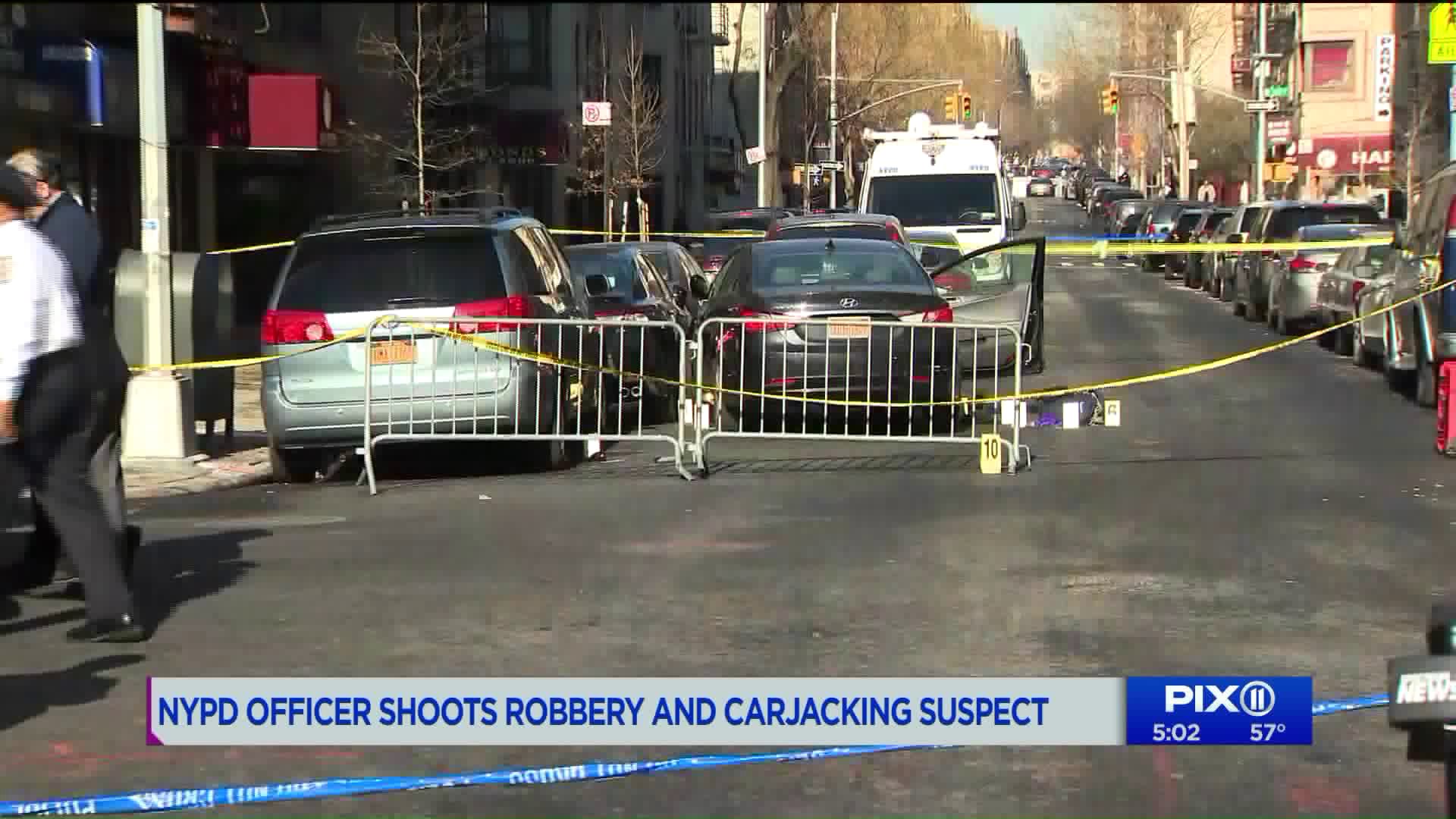 A driver possibly connected to multiple violent robberies citywide was shot by a cop after pinning the officer with a car in the Bronx on Monday, according to officials.

CONCOURSE, The Bronx -- A police officer and a teenage driver are both in the hospital -- the teen in critical condition, the officer in stable -- after the teen rammed her allegedly stolen car into the cop, and the officer shot the young woman, according to police.

They also said that the suspect was part of a ring of four teens who'd been on a three-borough violent crime spree since early Sunday morning. Officers said that the shooting brought the series of crimes to an end, in an unexpected location.

It was less than 50 feet from the entrance to the criminal and family court building here that the shots rang out, around 11 a.m. Monday.

"I heard like three shots," said Jason Rogers, who'd just stepped out of the courts building on Sheridan Avenue near 162nd Street, following a status hearing for a misdemeanor case in which he's involved.

"I was trying to look for the shooter, 'cause I want to be safe," Rogers said.

Jose Sánchez, who'd also been in court when the shooting took place, said he was stunned.

"For it to happen in front of family court, it's mind boggling, man," Sánchez said. "Crazy."

The city's top uniformed police officer, NYPD Chief of Department Terence Monahan, came to the scene, along with other top brass, including First Deputy Commissioner Benjamin Tucker, and Deputy Commissioner for Intelligence and Counterterrorism John Miller.

Chief Monahan explained, in a news conference at the scene, how investigators said they'd linked the suspects' car, a black Hyundai Sonata, to a variety of crimes.

The chief said that at around 6 a.m. Sunday, a group of two teenage young women and and two young men in their teens carjacked a vehicle near Hunts Point, in the Bronx.

"Then they went to Manhattan," Monahan said, and in the Gramercy Park neighborhood, carried out a robbery, according to investigators.

"Then, they go to the Brooklyn 61st precinct," he said, which is in Sheepshead Bay. There, said the chief, the four carried out at least two more robberies and carjacked the Sonata.

As a result of those crimes, according to the chief, the Sonata was being searched for citywide. A police cruiser's license plate scanner spotted the allegedly stolen Hyundai outside of the court building.

That's when the officer, who's 24 years old and a 2 1/2 year NYPD veteran, approached the allegedly carjacked vehicle.

"The uniformed cop ran up," said Monahan, and the driver "pitched in reverse," he said. That, in turn, "pinned the uniform cop. They were trying to get away, I think."

"The officer discharged her weapon," said the chief, leaving "the driver of the vehicle [with] gunshot wounds to chest, and left side of the torso."

He said that the driver, who's in her mid- to late teens, is in critical but stable condition at Lincoln Hospital.

The officer, who was injured in her hip area, was also rushed to the hospital. She's expected to recover well.

Police arrested the driver and her two passengers -- another teen female, and a teen male. According to police, the three had been waiting outside of court for another teen male, who'd been in court on a possible unrelated criminal matter.

He is suspected, along with the other three teens, in the crime spree, and police said that they intend to apprehend him soon.

Chief Monahan said that both teen males are suspected in another carjacking and robbery in the Bronx on January 22.