Feds say Brooklyn jail will have power restored by Monday 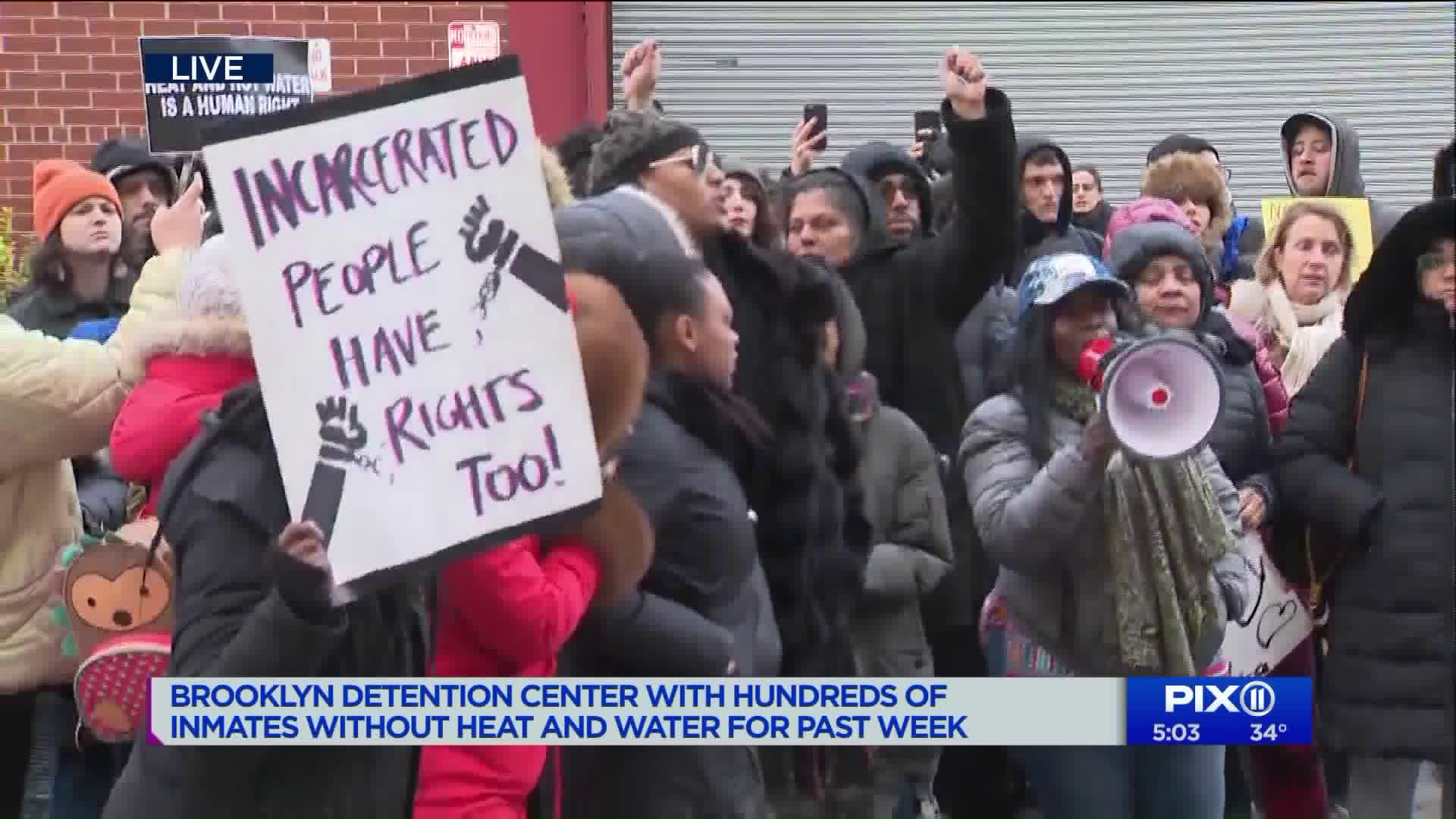 A congresswoman who visited a federal detention center in New York City where inmates have been stuck in cold, dark cells for days said Saturday it was "surreal" to hear the inmates banging on the walls. 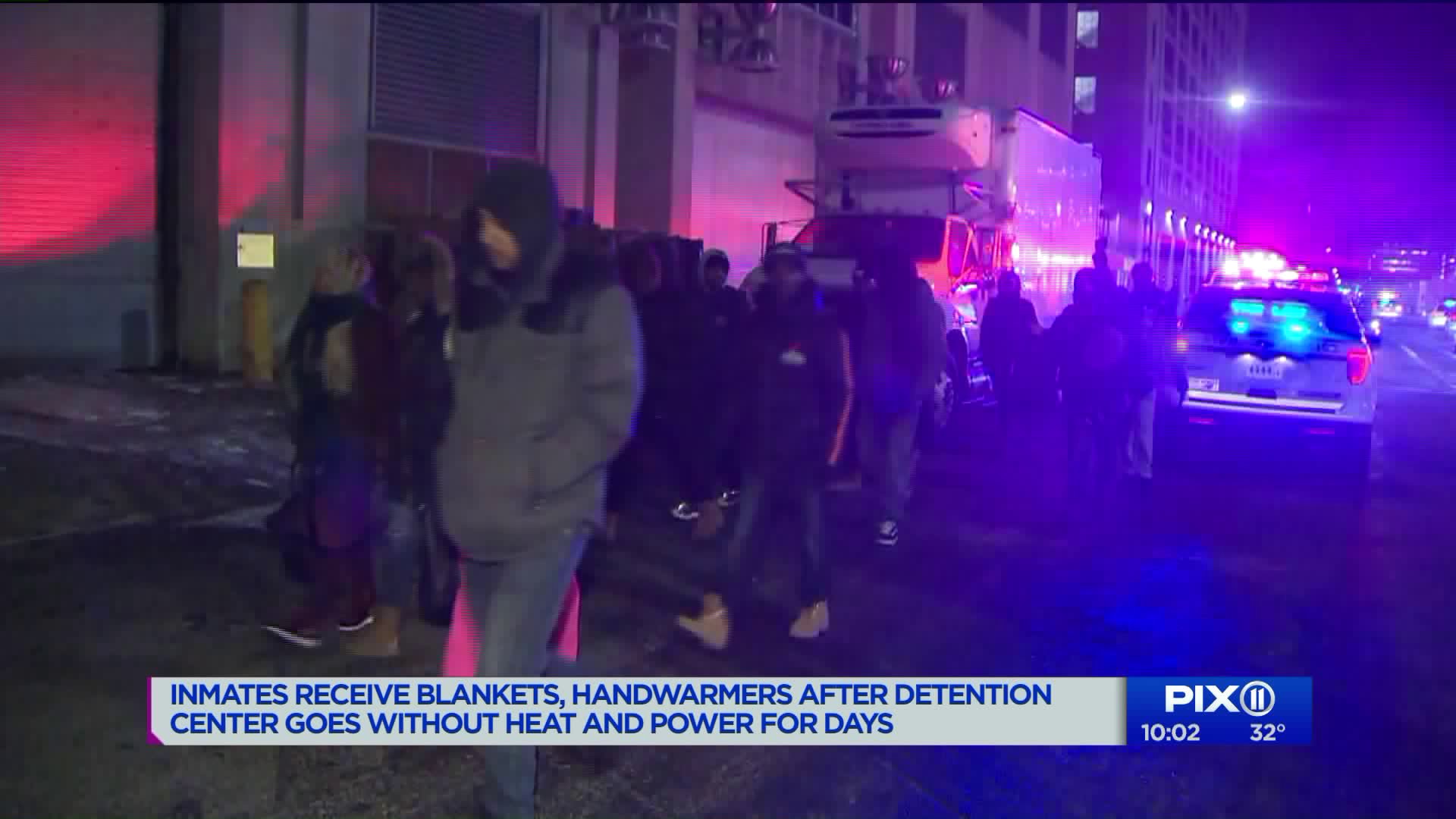 NEW YORK — The federal Bureau of Prisons said Saturday that work to restore power to a detention center in New York City where inmates have gone without heat and electricity for a week will be completed by Monday.

But a congresswoman who visited the Metropolitan Detention Center in Brooklyn for the second time on Saturday said officials are not taking the situation seriously enough.

"The inmates are very, very angry and complaining," said Rep. Nydia Velazquez, a Democrat whose district includes the jail. "We expressed our frustration that the warden is not approaching this with a sense of urgency."

Velazquez first visited the jail Friday after seeing news reports that hundreds of inmates there have spent the past week largely without heat, power or the ability to communicate with their attorneys or families.

After being denied access to inmates on Friday, Velazquez returned Saturday with fellow Democratic Congress members Jerry Nadler and Carolyn Maloney as well as city and state lawmakers, and this time the elected officials spoke with inmates. "They all complained about the cold," Velazquez said.

The New York Times first reported Friday that inmates at the detention center had been stuck in their cells without lights or heat since last weekend when an electrical fire knocked power out. Lawyers who had been able to speak with their clients at the jail said some inmates were suffering health consequences from the lack of heat.

The Bureau of Prisons acknowledged in an emailed statement Saturday that the jail "experienced a partial power outage due to a fire in the switch gear room." The bureau said a new electrical panel is being installed by an outside contractor and work is expected to be completed by Monday.

The bureau said air temperatures in the units "were within acceptable ranges" Saturday.

Velazquez disagreed. She said lawmakers measured the temperature as low as 49 degrees in some cells. "The heat is sporadic and it's uneven," she said.

Lawyers for inmates at the facility, which houses people awaiting trial or awaiting sentencing on federal crimes, have said that clients with health problems have been suffering in cold cells without access to warm clothes or blankets.

Lawyers with the Federal Defenders filed a motion Thursday in Brooklyn federal court on behalf of inmate Dino Sanchez asserting that Sanchez, who suffers from asthma, "has been left to freeze in his short-sleeved jumpsuit in the dark." The court papers say jail officials have taken no steps to provide Sanchez with "an oxygen mask, clothing, blankets, or access to a habitable location that will mitigate his health risks."

Mayor Bill de Blasio said Saturday night that hundreds of blankets and hand warmers were sent to MDC whether the Federal Bureau of Prisons "like it or not."

New York City is sending trucks with hundreds of blankets and hand warmers to the Metropolitan Detention Center NOW and generators are being readied for transport. We've told the Federal Bureau of Prisons the supplies are coming – whether they like it or not.

"It's a violation of human rights and also it's a matter of health issues, but also compromising the safety and security of correction officers," Velazquez said. "People are angry and they're going to express that in any way they can."

In addition to affecting the heat, the outage has knocked out power to the computers that inmates use to email their families and attorneys and to request refills of prescription medications.

Some inmates have been able to talk to lawyers with the Federal Defenders on a dedicated line, but inmates represented by other lawyers haven't been able to call them.

"I need to find out what's going on with my clients," lawyer Ezra Spilke said Friday. "They've basically been incommunicado from their attorneys since the 27th, which is when the electrical fire happened."

Officials with the American Federation of Government Employees, the union that represents corrections officers at the jail, have confirmed the lawyers' accounts of the jail conditions.

"They're just waiting for a disaster to happen," jail employee Rhonda Barnwell, who works in the facility's medical station, told reporters Friday. "There's only heat in the afternoons since we've been complaining today."

Velazquez first visited the jail Friday afternoon and was not allowed to speak with inmates, although she heard them. "The inmates were banging on the walls, the doors," she said. "It was surreal."

The conditions at the jail drew condemnation from human rights advocates.

"This is worse than countries that we denounce," the Rev. Al Sharpton said at his weekly rally. "This is disgraceful and inexcusable."

Donna Lieberman, executive director of the New York Civil Liberties Union, said in a statement, "It is shocking that the government would hold people for days on end in a dark, freezing jail during one of the coldest weeks in memory."

Dozens of activists including a brass band rallied outside the jail Saturday. One group vowed to camp outside the facility until conditions improve.

*Thing just got intense. About 25 Corrections Officers came out in force. At around 20 seconds in, you’ll see an officer slap a phone out of a woman’s hand. What you don’t see is he then steps on it. And forcefully pushes past her. pic.twitter.com/QYmx2iVjqz