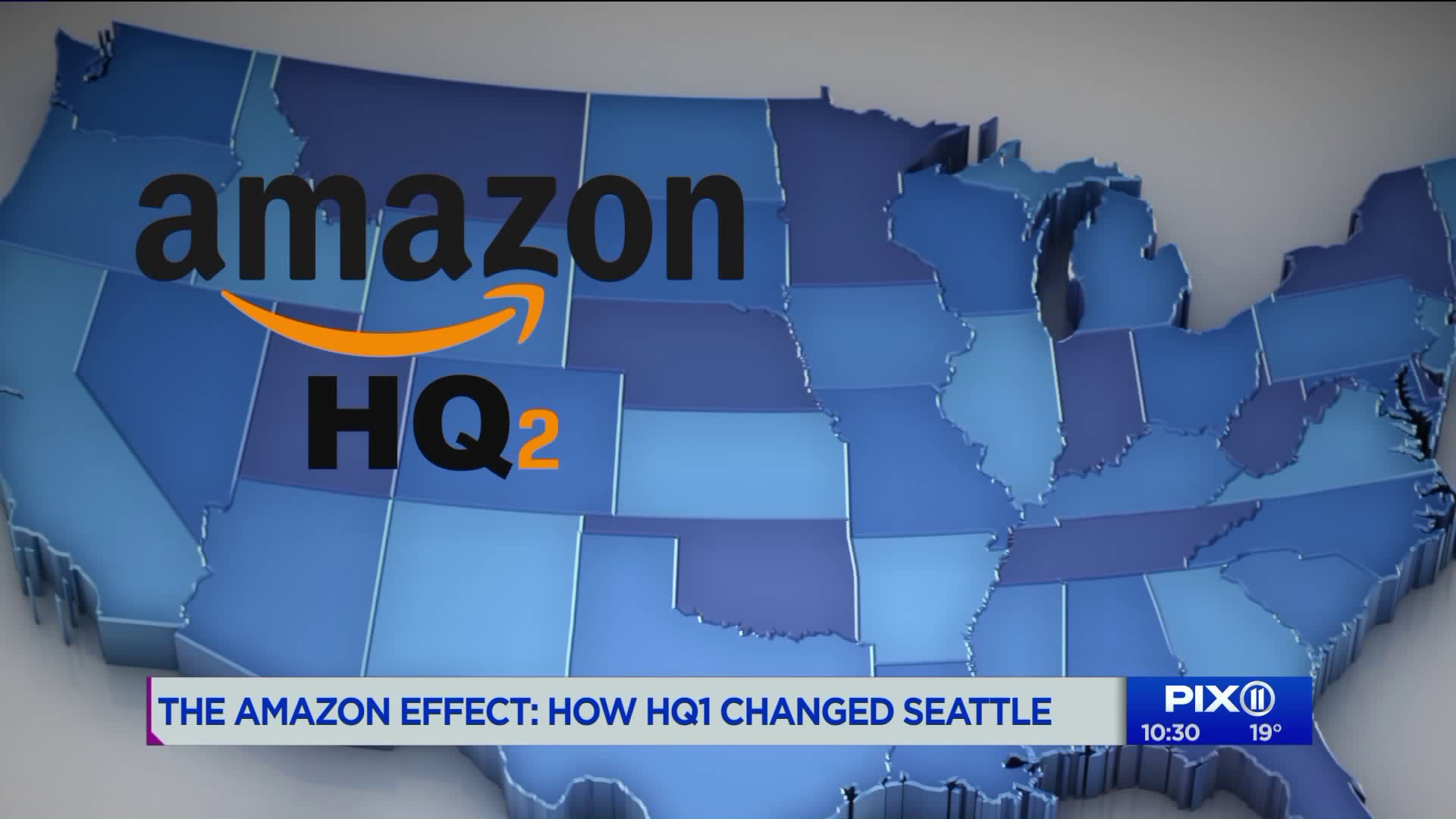 Since the announcement Amazon will open a second headquarters in Long Island City, there have been rallies, protests, City Hall hearings and a lot of questions. Right now, little is known of exactly what HQ2 will look like, so we went to the only place where we could get a comparison. 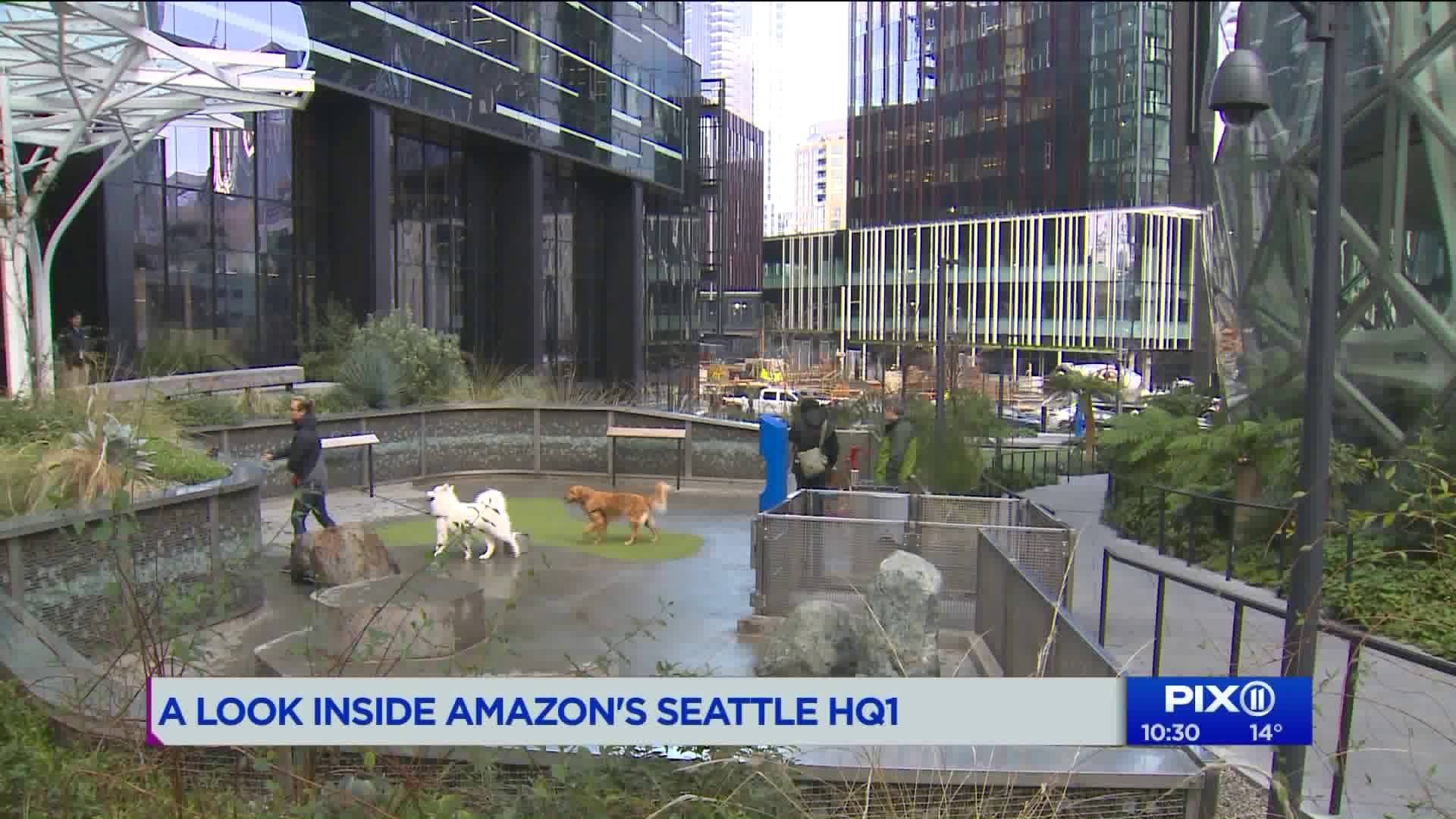 SEATTLE, Washington – The Space Needle has long been the iconic symbol of Seattle. Since last year, another symbol rivals that status – three glass spheres.

The spheres mark the home of online e-commerce behemoth, Amazon and is a stark sign of the meteoric rise of the company. The so-called “Amazon Effect” has changed shopping patterns across the country. Some would say it’s also changed how we live.

Since the announcement Amazon will open a second headquarters in Long Island City, there have been rallies, protests, City Hall hearings and a lot of questions. Right now, little is known of exactly what HQ2 will look like, so we went to the only place where we could get a comparison.

PIX11’s Shirley Chan traveled to Seattle, and got an exclusive tour of the original headquarters, HQ1, as well as a look at the impact Amazon has had on that city.

“When amazon was really starting to grow and expand here in Seattle, we made the very conscious decision to be in the heart of the city and we’ve really worked to stitch ourselves into the fabric of this city,” said Allison Flicker, Amazon Spokesperson. “We do things in our own uniquely Amazonian way so that’s why it was really important for us to be in this downtown core.”

Some of that Amazonian way: allowing employees to take their dogs to work, a recreation room in every building and inside those iconic spheres - a serene greenhouse work space.

Amazon employs 45,000 people in Seattle. Some applaud them, others say it’s too much change, too soon.

Over 40 amazon buildings are clustered just in downtown Seattle - a campus filled with millennial techies - some of the best and brightest in the world.

“Seattle downtown has been the fastest growing neighborhood so really a record amount of job growth, residential growth, hotel industry has been growing rapidly as well, Amazons been a big part of that,” said Jon Scholes, President and CEO of the Downtown Seattle Association. “There’s been a secondary wave, what Amazon has done is really attracted to Seattle other technology companies that didn’t have a presence here ten years ago, so Twitter and Facebook and Hulu and the list goes on and on who have come here,” adds Scholes.

Amazon has given over 40 million dollars towards affordable housing in Seattle…but has been criticized for not giving more. Supporters say those problems cannot solely be attributed to amazon – and some of the blame lies with the city government.

“We’ve had a self-inflicted wound here when it comes to housing affordability because we’ve restricted where it can be built and we need to change that,” said Scholes. “Other communities where Amazon is going in, I give the same advice, make sure you keep pace with the amount of housing you’re allowing to be built in your city.”

Stephen Saunders, managing broker at Coldwell Banker BAIN Seattle, says housing prices have doubled in the last six years. “It’s like a tsunami that’s happened in the last 8 years,” said Saunders. “It’s been quite exciting and I think we still have some expansion to do, to grow, this latest boom for us is absolutely starts and ends with Amazon.”

Ten years after the company first announced downtown would be the site of HQ1 - their original plans for the sprawling campus has quadrupled. Transit tie ups and traffic backups are the norm. For the third year in a row, Seattle has led the nation’s cities in the number of work cranes with over 60.

Shulman has studied Amazon and does a regular podcast about Seattle’s growth. He weighs in on Amazon selecting the New York City area for one of two locations for HQ2.

“You look at it through the lens of Amazon they are one of the most innovative companies in the world, they need the best and brightest in creative thinkers in order to push the boundaries,” said Shulman. “As they were deciding where to put their headquarters they need to think about where they can attract and retain the best and brightest talent – New York is teeming with talent.”

“I know a huge draw of that area is talent and that’s something that’s super important to us here at Amazon,” said Flicker. “We’re really excited to be in Long Island City we’re excited to bring thousands of jobs there.”

But there’s rising concern here at home. Do those 25,000 jobs outweigh the expected issues of lack of affordable housing and stress on transit and traffic? Amazon will create 25,000 jobs over ten years in LIC – ranging from software engineers to operations to sales and more. The average salary more than $150,000.

“There’s going to be consequences we have a homeless problem that’s rising we need to deal with that the affordability is an issue people are now having to move farther north, farther south in order to be able to afford a home.,” said Saunders.

There’s also concerns HQ2 will forever change a community already battling gentrification. Both Mayor de Blasio and Gov Cuomo are supporters of HQ2 - agreeing to give a $3 billion dollar tax break to one of the world richest companies. But The fervent opposition has only grown.

Just this week – Amazon executives were in the hot seat at City Hall – facing tough questions from council members, union groups and local protestors. The hearings were disrupted both inside and outside. As some chanted “Amazon has got to go!” supporters were also present. Members of several construction unions, including 32BJ SEIU, held up signs and talked openly about how HQ2 means more construction jobs, even though Amazon has said they don’t plan to hire unionized workers.

“The growth in the last six years has been at a dizzying pace,” said Shulman. “You could expect the immediate area of Long Island City where they’ll go that there’ll again be a physical and cultural transformation.”

While amazon says it’s too early to commit a dollar figure for housing in Long Island city – they point to the community partnerships they have in Seattle. They’ve donated tens of millions as well as space on their campus to Mary’s Place - an organization of shelters.

“The building that we’ll be moving into is 2020 is a permanent building they have said as long as we need it until we solve family homelessness its ours,” said Marty Hartman, executive director of Mary’s Place.

There is also a symbiotic relationship with area businesses who benefit from their growth.

“The dining scene mirrored that. I think without the customers it’s kind of hard to have the growth that way but really in that small span of time I think the number of restaurants especially downtime has just multiplied rapidly,” said restauranteur Eric Tanaka, restauranteur and partner of Tom Douglas Seattle Kitchen.

“We’re really listening hard right now and working to make sure our move to Long Island City and this development in this community is beneficial to everyone,” said Flicker.

But is Long Island City ready for that kind of boom once HQ2 goes up? City and state leaders in favor – including Governor Cuomo and Mayor de Blasio - say the total city and state revenue will be more than $27 billion dollars and that is reason enough to give the online retailer, one of the richest companies in the world, a $3 billion dollar tax break. Others, like City Council Member James Van Bramer, who’s district includes Long Island City, want the Mayor and Governor to kill the deal.

“Maybe just maybe they’ll say you know what we’ve learned too much since we announced the deal that disturbs us that we can’t go forward,” said Van Bramer.

Although they’ve not yet committed dollars to help with housing or public transportation in LIC – Amazon announced new initiatives this week including funding computer science classes at over 100 public schools and a program to hire NYCHA residents for jobs.

“I will say to a future city, it’s an exciting time it’s definitely exciting and it comes with its consequences but it’s exciting get prepared,” said Saunders.

The e-commerce behemoth may have met it’s match in strong willed New Yorkers and whether they win over New Yorkers remains to be seen.