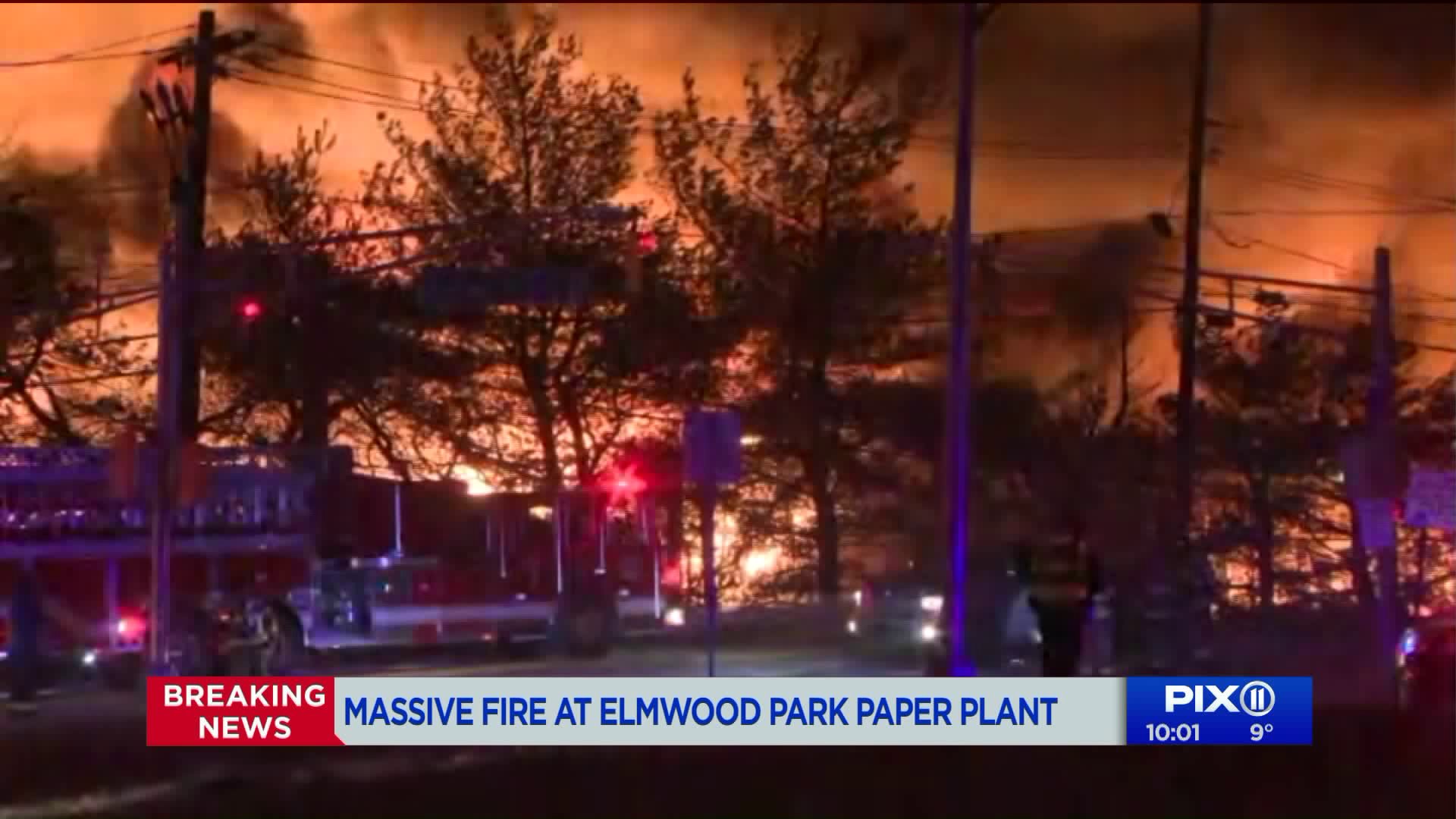 It started just after 5 p.m. at one of the Marcal Paper Mills warehouses in Elmwood Park, New Jersey. The warehouse contains large paper rolls used to make toilet paper, paper towels and tissues, according to officials. 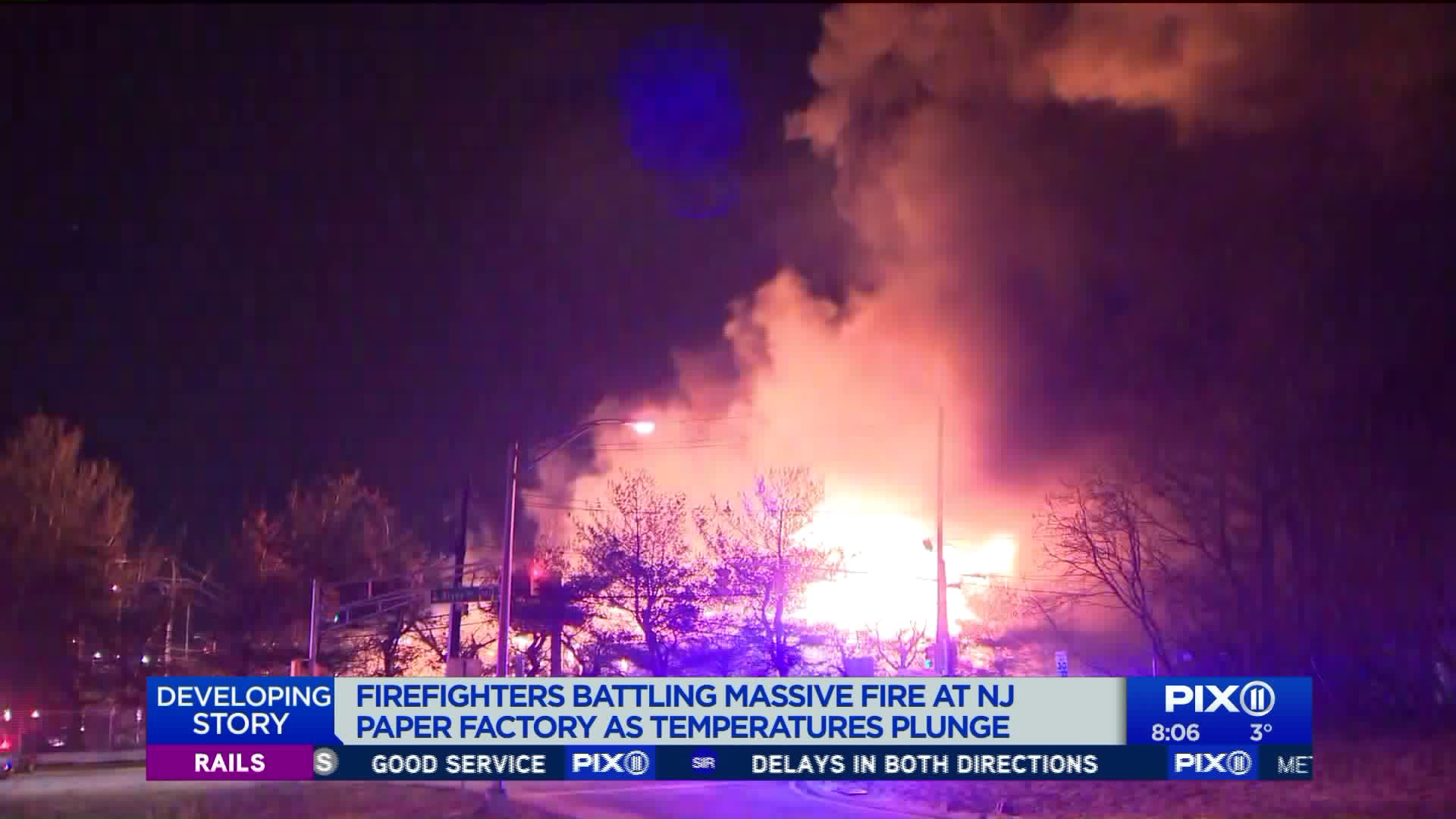 It started just after 5 p.m. at one of the Marcal Paper Mills warehouses in Elmwood Park, New Jersey. The warehouse on River Drive and Summit Avenue contained large paper rolls used to make toilet paper, paper towels and tissues, according to officials.

The fire quickly spread to at least six other buildings, including the main 4-story building, which has collapsed. NJ.com reports that the plant's iconic red sign visible for years along Route 80 has also collapsed. About 90-percent of the complex is destroyed, according to an Elmwood Park police chief.

There are no known injuries at this time.

The blaze is not believed to be suspicious.

Firefighters from at least 10 Bergen County towns are on the scene, as well as Paterson in Passaic County. They were still trying to extinguish the flames around 10 p.m.

Elmwood Park Chief of Police Michael Foligno said at a press conference that frigid temperatures are a concern for first responders. He said if it was not so cold and windy, the fire would have been knocked down already and added the "whipping" wind feeds the flames and causes them to spread rapidly.

Gov. Phil Murphy commended the fire personnel who worked to put out the blaze.

"It's a tight knit community. An awful fire in any weather let alone this weather. We take their hats off to their courage and bravery."

This is the second fire at the paper factory in a month. A 2-alarm fire broke out earlier this month, another one in February 2017, and a massive blaze back in 2012.

“It’s not our first fire here, it’s frequent, it’s a paper mill so it happens a lot," Foligno said, adding that Marcal has its own fire brigade and is "pretty good about controlling fires."

Power is being cut to the area around the fire, but it is not yet known about many people will be affected.

Local schools were also closed not only due to weather, but also for traveling conditions and concerns as roadways were blocked.

Five homes were also evacuated along Chamberlain and Paterson avenues. Residents were taken to a nearby recreational center for a few hours, the police chief said.

Delays were reported on Route 80 near the westbound Exit 61 ramp around 6 p.m., according to NJ511. The ramp was closed and traffic was being detoured.

NJ Transit said their trains are not affected by the fire.

Justin Soffer, who was on a flight into Newark Liberty International Airport, tweeted this photo of the fire from  the air:

The following statement was released by the Marcal Paper Company:

PIX11's Cristian Benavides was on the scene of the fire in New Jersey:

AIR11 was over the scene the morning after the blaze, showing what's the left of the building, including smoke, ice and rubble.