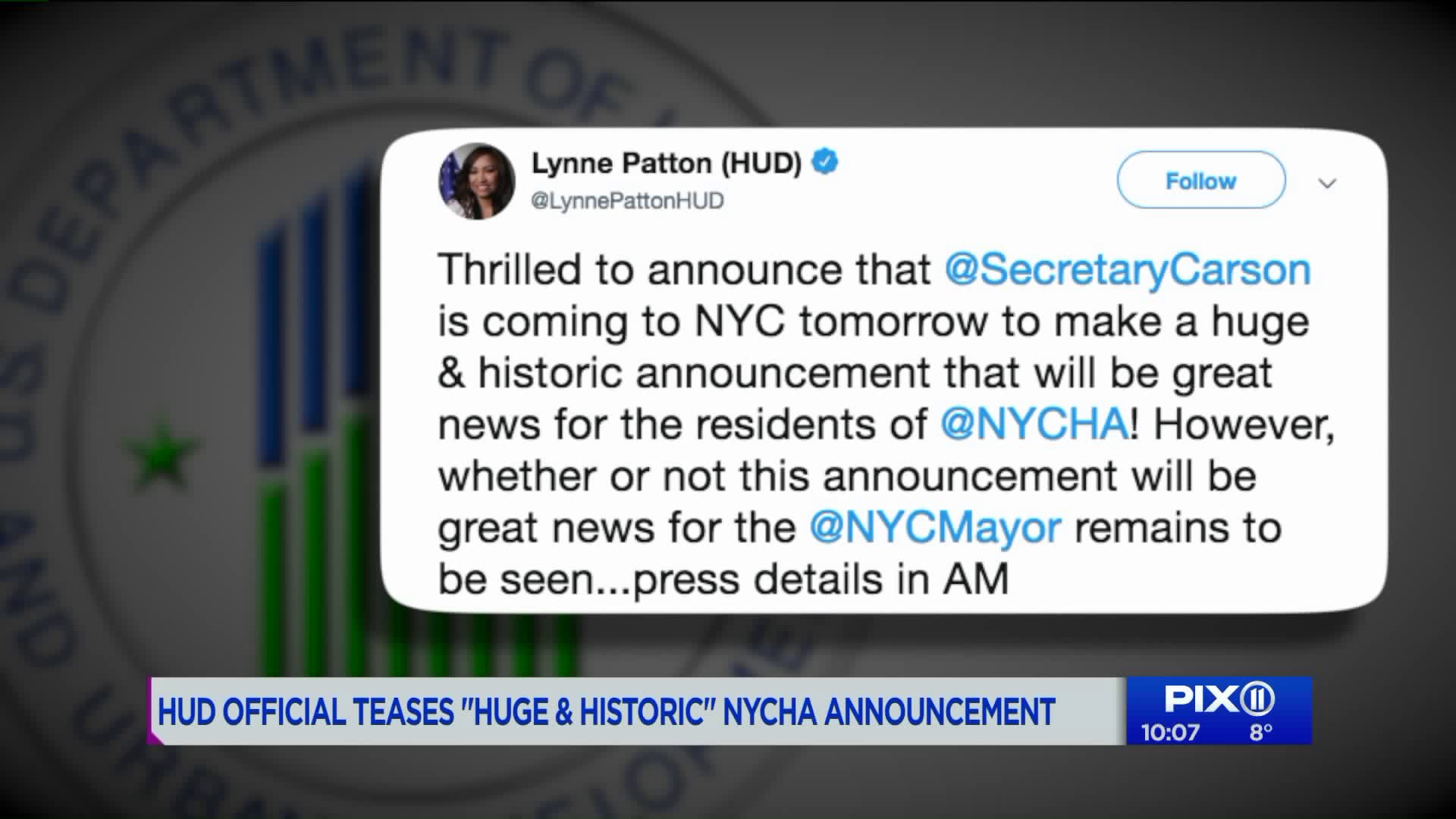 Housing Secretary Ben Carson will be in New York Thursday to make a "huge and historic" announcement that will be "great news" for the residents of the New York City Housing Authority, local Housing and Urban Development official Lynne Patton said on Twitter.

NEW YORK — Housing Secretary Ben Carson will be in New York Thursday to make a "huge and historic" announcement that will be "great news" for the residents of the New York City Housing Authority, local Housing and Urban Development official Lynne Patton said on Twitter.

"However, whether or not this announcement will be great news for the @NYCMayor remains to be seen," she tweeted.

City Council Speaker Corey Johnson was not happy with the lack of clarity in her tweet. He said that "playing coy" over something that could impact that lives of hundreds of thousands was "disgusting."

"This isn’t a ratings ploy," he tweeted. "This is real life. Enough with the games."

Carson's visit comes as HUD, federal prosecutors and City Hall reach a deadline on fixing problems at NYCHA, which has long been plagued by lead, mold and heating issues, among others.

Carson said if the city doesn’t come up with an “acceptable” plan to fix NYCHA, a federal takeover is an option. Another option is a judicial receivership, which would mean a federal judge would provide oversight over the troubled agency.

"It’s really cold out and, like last night and like all the nights ahead, the Mayor is focused on residents in NYCHA apartments," Phillips tweeted.

"Excellent news. However, I am not in the business of passing out awards to people for doing their jobs. We ALL want what’s best for the residents," she tweeted. "Tomorrow is a NEW DAY."

Patton also referenced her plans to stay in a NYCHA building, which were pushed off because of the lengthy federal government shutdown.

"The only announcement about NYCHA should be a real financial commitment," he tweeted. "Anything less than that is total bulls**t."

Carmen Quionones, the Tenant Association President of the Douglass Houses in the Upper West Side said, “whoever runs the place, the residents have to be at the table, at the top."

"A judiciary receivership is the only thing HUD should be supportive of when it comes to what's best for the residents of NYCHA," said Cynthia Tibbs from the Wise Towers on the Upper West Side.

Patton visited the “Monica Makes It Happen" Facebook show back in December.

“I still have serious concerns as does the secretary as to whether or not they (City) can make these improvements without robust oversight,” Patton said.

Mayor Bill de Blasio, who introduced NYCHA 2.0, a plan to create a new and improved NYCHA, has said he wants to keep the accountability of NYCHA at the local level.

“Oversight by anybody else will make things better I urge people to look at the history," de Blasio, said on a local radio show in early January.