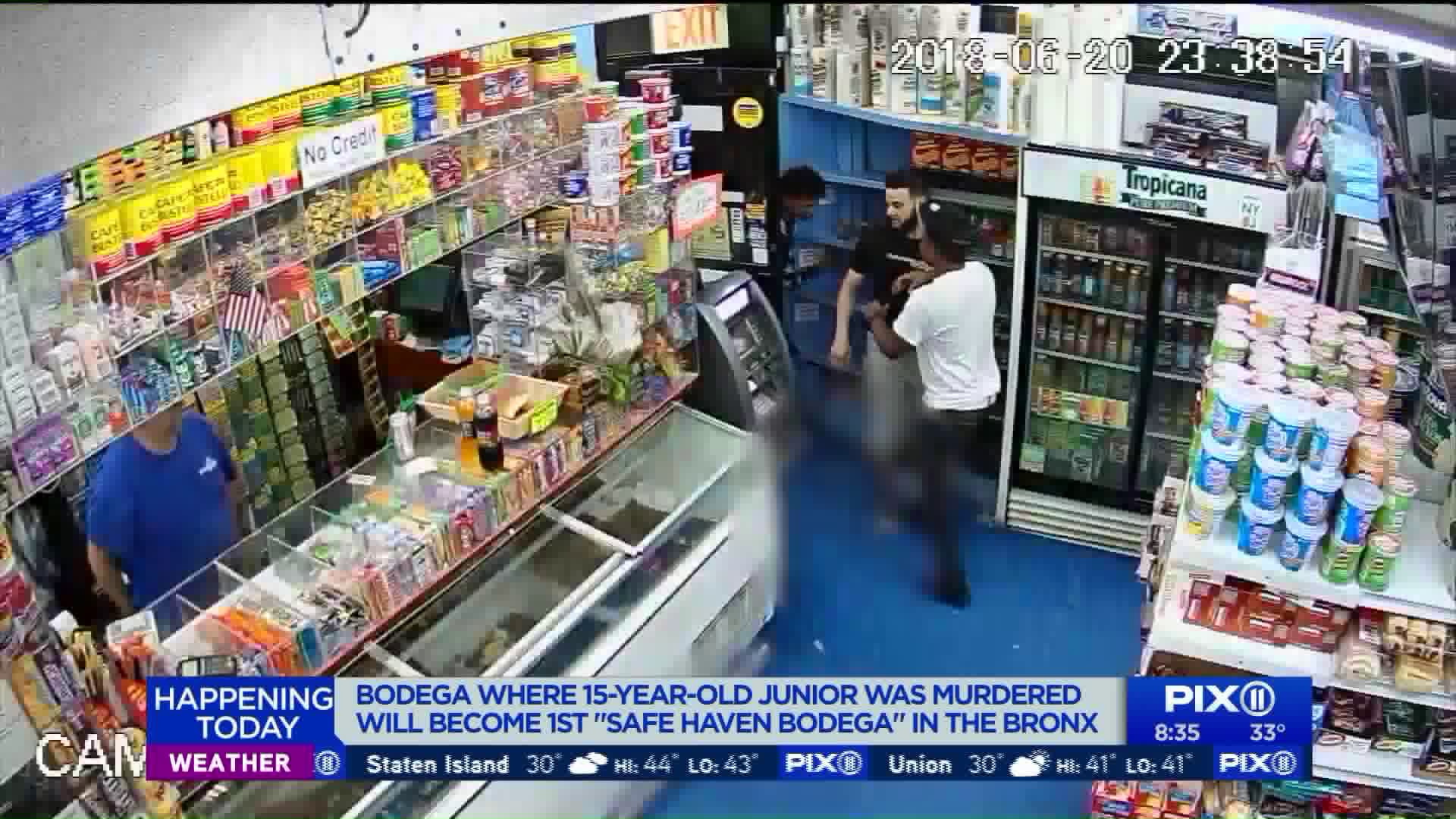 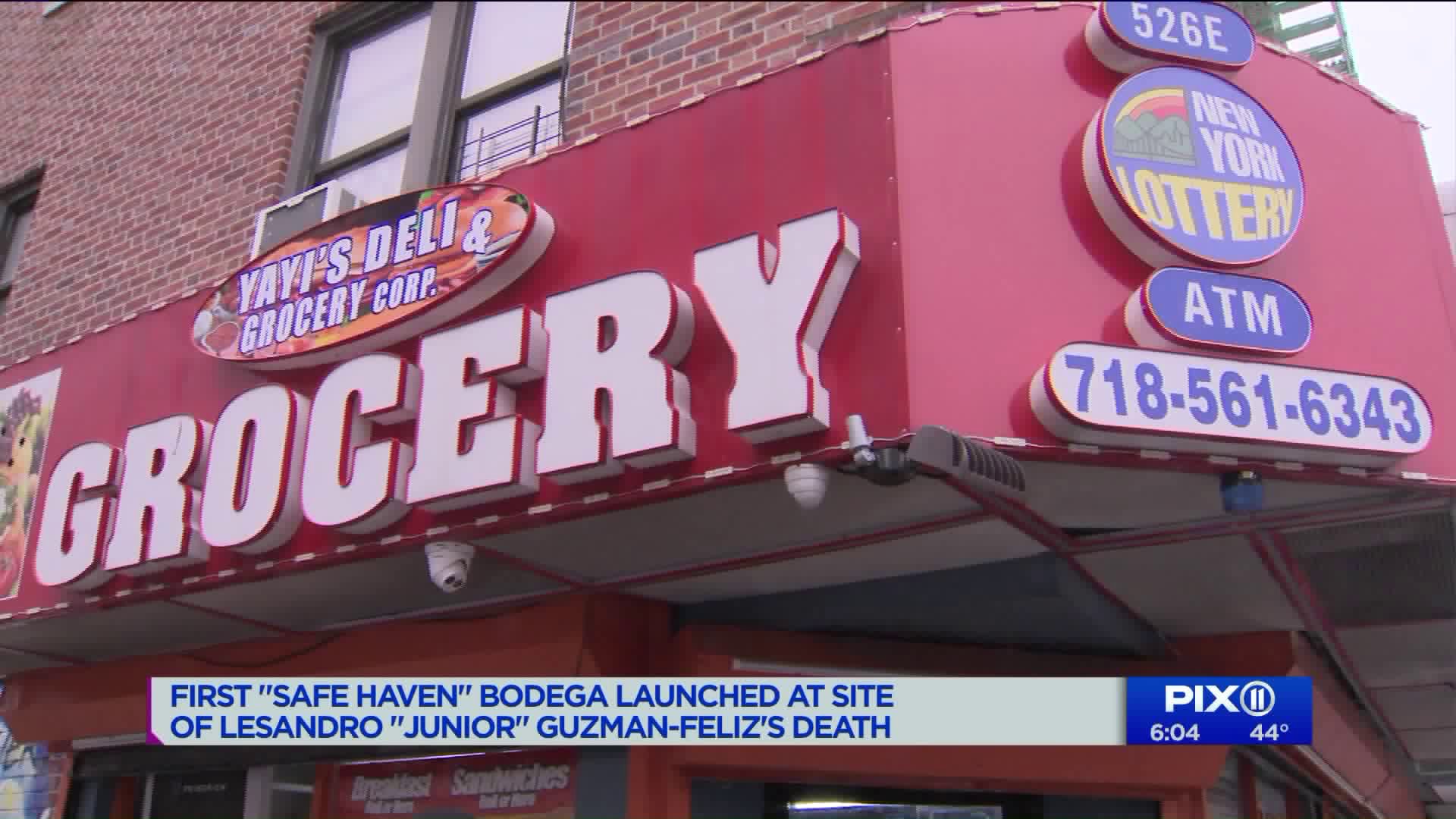 The BRONX — The bodega where Lesandro "Junior" Guzman-Feliz was attacked and later died nearby becomes the first “safe haven bodega” in the Bronx more than six months after the teen's death.

The bodega, which has reopened under new ownership at East 183rd Street and Bathgate Avenue, was selected to be the first “safe haven bodega” after the 15-year-old's murder sparked an outcry to protect people from would-be attackers.

The United Bodegas of America and city bodega owners teamed up with NYPD at a safety summit in December, where dozens of employees learned how to prevent gang attacks, including training of how to handle violent situations and implementing panic buttons for emergencies.

The six-step NYPD safety program was implemented to prevent gang assaults and robberies.

“To gang members, to criminals, to anyone that wants to cause harm to any human being – if you come into a bodega you will get caught because we are equipped now,” said Fernando Mateo, a spokesman for the United Bodegas of America

There will also be a state-of-the-art camera system.

“It will allow a police officer of any precinct to monitor in real time, in live time what’s happening at that bodega,” Mateo said.

The bodega where the Bronx teen was killed has struggled to stay in business since Junior's murder. A private security company has donated their time, technology and labor to convert the bodega into a safe space for the community.

Virtuous systems - the tech company behind the system - provided and installed the equipment free of charge to Yayi’s Deli and Grocery, citing financial woes the owner has experienced since last year’s tragedy.

“You can’t stop people from doing wrong but we can prevent it on our end and we have to do something about it,” Steven “Butch” Thomas owner of Virtuous Systems, told PIX11 News. “This is just one step and as of right now it’s a really good step.”

According to the UBA, nearly a dozen bodega and deli owners have already signed up for the safe haven security system.

For those bodega owners who want the system in their establishment, it’ll cost them about $4000.

On June 20, the teen was chased down by a group of alleged members of the Trinatrios gang. When he sought shelter at the bodega, he was dragged out.

After being beaten, stabbed repeatedly and slashed across the throat with a machete, Guzman-Feliz, ran back inside the store. Surveillance video captured the incident, including a person inside the bodega apparently pointing the mortally wounded teenager away from the store.

A person was then seen pointing, telling to run to a nearby hospital because 911 had been called and an ambulance was taking too long to respond. Guzman-Feliz died in an attempt to reach the hospital.

Fourteen suspects have been arrested and charged with murder since the June attack.

Defense attorneys for five suspects have argued successfully for a delay in the first trial. The judge ruled pre-trial hearings could be delayed until March 25 and said the trial would start immediately after they were finished.