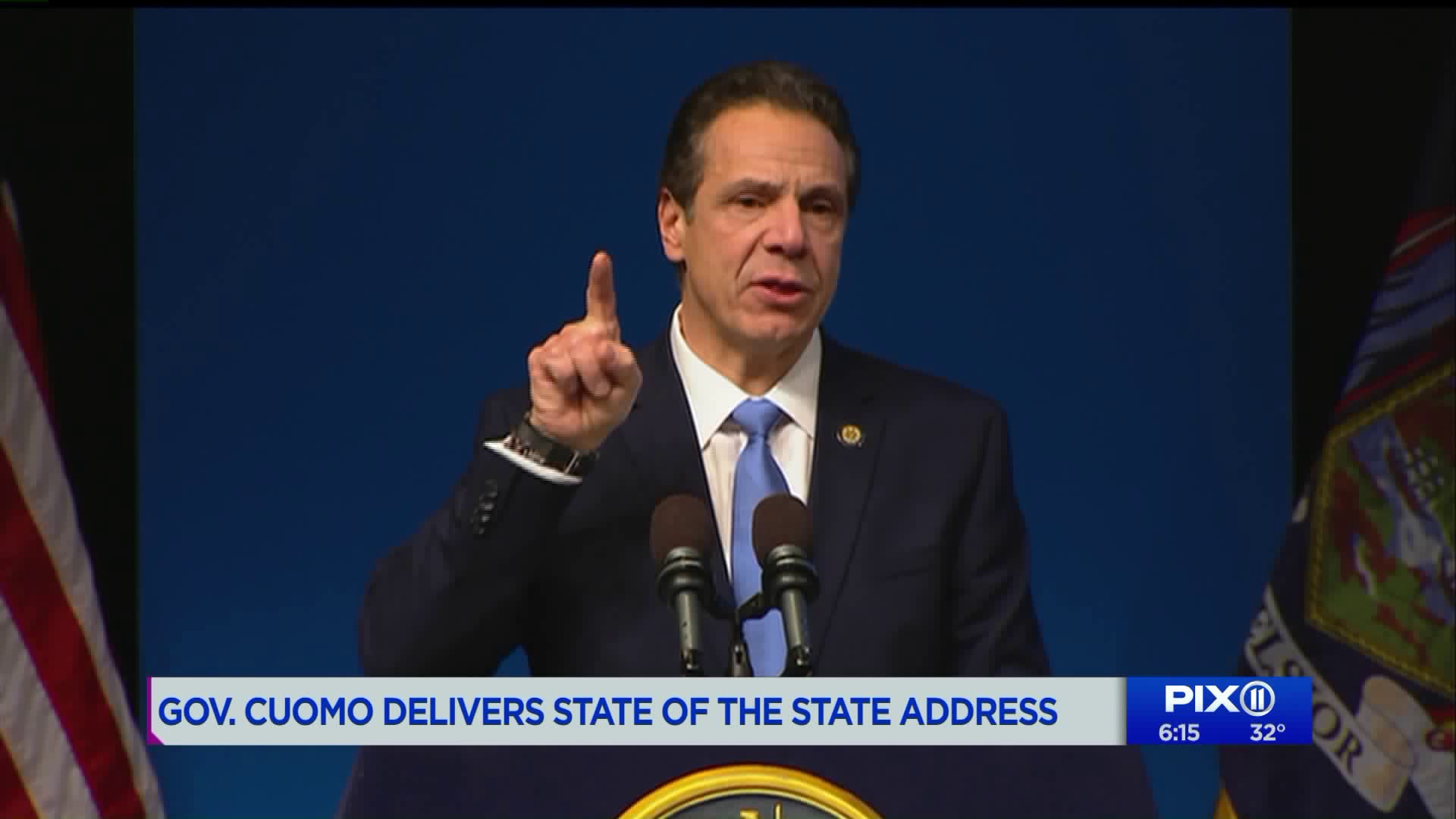 Marijuana legalization was the most notable of several big ideas floated by Gov. Andrew Cuomo during his annual State of the State address on Tuesday, including new congestion tolls in Manhattan and a statewide ban on plastic bags.

The measure would permit personal use as well as retail sales of the drug. Marijuana taxes would raise an estimated $300 million a year, Cuomo said. Cities and counties could prohibit retail pot shops within their boundaries if they choose.

Legalization was the most notable of several big ideas floated by Cuomo during his annual State of the State address on Tuesday, including new congestion tolls in Manhattan and a statewide ban on plastic bags.

"The time for talking is over," Cuomo said in the speech. "It is the time for doing."

Removing penalties for recreational marijuana has broad support in the Democrat-controlled Senate and Assembly. Cuomo inserted the measure into his $175 billion state budget proposal, which lawmakers plan to act on by April 1.

Two years ago Cuomo dismissed marijuana as a "gateway drug" but now says he supports legalization following a study by state health officials who determined the benefits of legalization outweigh the risks. The governor's change of opinion mirrors a similar evolution across the country. If New York follows through with legalizing marijuana it would be the 10th state and the second largest after California to take the step.

The proposal comes with a plan to seal past marijuana convictions, a provision lawmakers like Assembly Speaker Carl Heastie, D-Bronx, have said must be a part of the discussion. Many Democrats in the Legislature say the state cannot legalize pot without trying to help New Yorkers whose lives were negatively impacted by decades of marijuana prohibition.

Heastie said after Cuomo's speech that "there has to be some economic empowerment, particularly for communities for color, who as the governor did mention, have really been on the opposite end when it comes to criminalizing marijuana."

While there's broad agreement in Albany about legalization, figuring out the details when it comes to taxing, licensing and regulating the product is likely to be challenging. Also, Cuomo's proposal would not allow individuals to grow their own marijuana; recreational users would be required to purchase the product at a store. That's a restriction not included in some of the other initial legalization proposals from lawmakers.

"We're going to need to see details," said Sen. Joe Griffo, R-Rome. "If you're going to do this, you should do it right. Take a look at what other states have done, and learn from them."

Ari Hoffnung, CEO of Vireo Health, one of the 10 companies now licensed to grow and sell medical marijuana, hailed Cuomo's proposal as "a historic step" but said it would need to be studied carefully to ensure it doesn't undermine the existing medical pot market.

"No matter how many states try, pot does not bring the promised 'windfall' of revenue," said Kevin Sabet, president of the group Smart Approaches to Marijuana, which opposes legalization. "This fight is far from over. We will be making our voices heard."

Cuomo was light on details on his proposal to impose congestion tolls on motorists traveling below 60th Street in Manhattan beginning in 2021. Cuomo didn't release a specific toll amount, or say whether small businesses or low-income commuters would receive a discount. Those details would be figured out during negotiations with the Legislature. The tolls would be intended to discourage traffic while raising money for badly needed repairs to the city's subway system.

A broad coalition of local chambers of commerce, environmental groups and transit riders argues congestion tolls are the best way to address the city's beleaguered transit system. Several hailed Cuomo's support, but said they want to see the details. A previous study has estimated tolls as high as $12.

Cuomo was also relatively vague about a proposal to overhaul the Metropolitan Transportation Authority to reduce bureaucracy and place it more firmly under his authority. Cuomo already appoints the MTA chairperson and largely controls the agency, but says it needs structural changes in order to more aggressively address mounting delays and breakdowns.

"Millions of transit riders are counting on the governor and Legislature to fix our subways and buses with a new, dependable source of funding," according to a statement from a coalition of supporters that include the Riders Alliance, the League of Conservation Voters and the Tri-State Transportation Campaign.

Many of the items on Cuomo's wish-list reflect long-time liberal priorities that had been blocked by Republicans in the state Senate. Last fall's elections swept the Democrats into power in the Senate, however, giving them a lock on both chambers and the governor's office.

Other left-leaning suggestions in the governor's speech include a proposed state constitutional amendment codifying the abortion rights laid out in Roe v. Wade; the extension of financial aid to students whose parents brought them to the U.S. illegally as children; and the elimination of cash bail for criminal defendants.

Cuomo also announced that he'll include safety reforms for limousines in his state budget proposal in response to the October crash of a stretch limo that killed 20 people in an upstate town. One change would ban reconfigured limos like the modified SUV that crashed into a store's parking lot in Schoharie on Oct. 6, killing the driver, 17 passengers and two pedestrians.