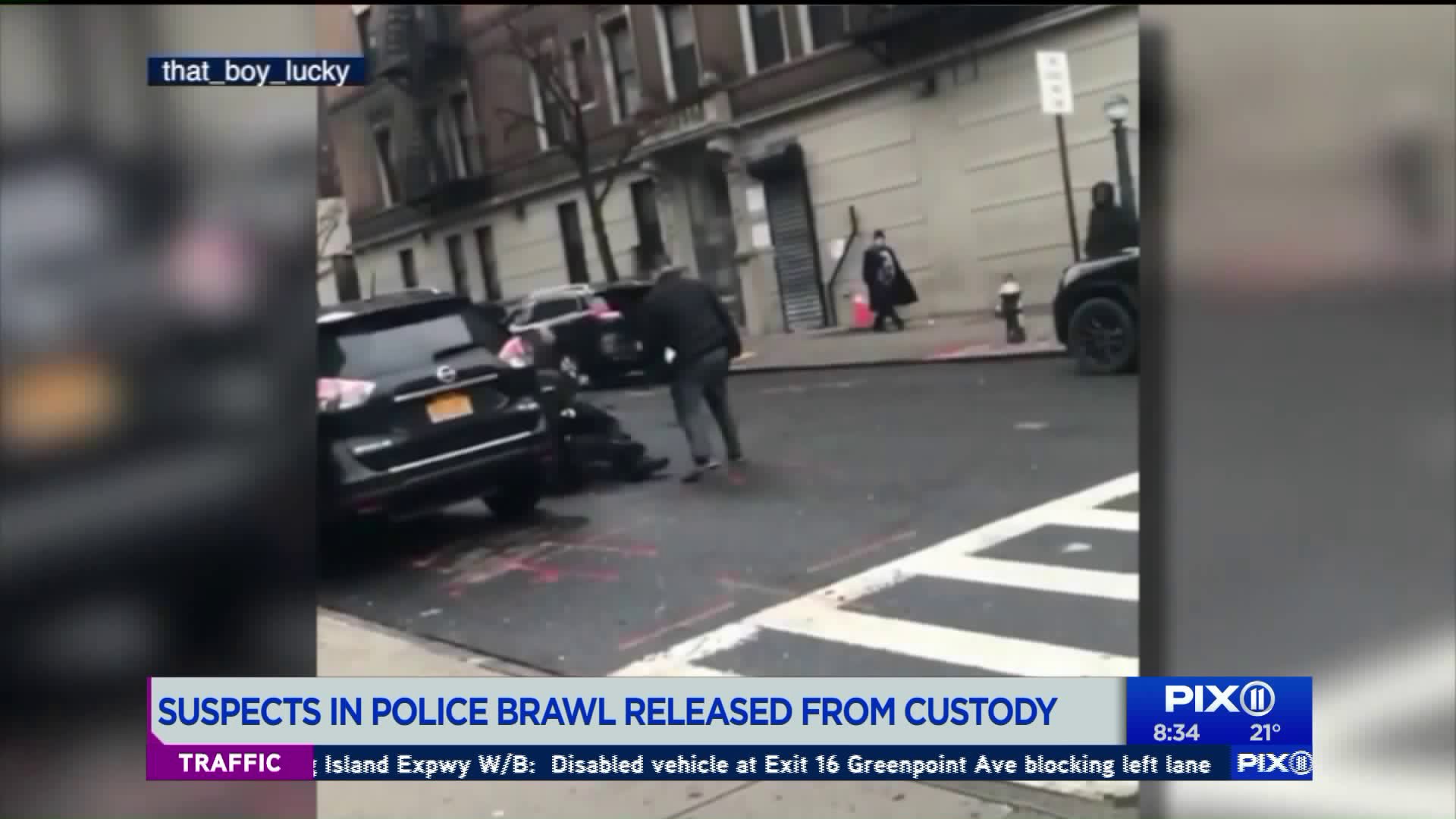 Days after a clash between two men and police officers in Washington Heights, the district attorney released them from custody.

WASHINGTON HEIGHTS, Manhattan — Days after a clash between two men and police officers in Washington Heights, the district attorney released the two men from custody.

Sidney Williams had his charges dropped, while Aaron Grissom was released without bail.

Earlier this week, a wild scene unfolded at the corner of Broadway and 169th Street during the day when police repeatedly kicked and struck the men who were resisting arrest.

The brawl occurred after Williams, 37, and Grissom, 36, were asked to leave the 168th Street subway stop following complaints from riders that the duo was allegedly harassing people and smoking on the stairs leading to the subway platform.

When they refused to leave, officers tried to place them under arrest, but they fled out into the street. Video shows an officer take out his baton and swing at it one of the two men.

When the one of the individuals appear to be restrained, video shows the officers continue to strike him on the ground.

According to PBA president Pat Lynch, the video doesn’t show Grissom and Williams allegedly attacking the two officers. One of them was previously arrested for assaulting a police officer.

The Police Commissioner expressed his outrage over Twitter early Friday, arguing the District Attorney’s decision puts the safety of cops and the public in jeopardy.

The Police Officer’s Union cautioned, “Every perp who has ever thought about taking a swing at a cop is watching the outcome in this case. They should have been sent a clear message: if you have any involvement whatsoever in assaulting a police officer, you will face charges and spend real time behind bars. Instead, they will once again receive the message that they can deal drugs, terrorize the community, attack police officers, and be back out on the street in no time...”

The district attorney's office said they are conducting a full investigation into the alleged offenses against Grissom and Williams and the officers.

"We are separately conducting a full, fair, and independent investigation into the force used by Officers during this encounter. With regard to Mr. Williams, our Office does not currently have probable cause to believe that this defendant committed a crime. Accordingly, we are deferring a charging decision as to Mr. Williams pending the completion of this investigation," said Danny Frost, of the DA's office.

Grissom was arraigned Thursday evening for the incident. The complaint claims Grissom punched one of the officers prior to the violent arrest. Because the investigation is ongoing, the district attorney's office said bail was not requested, but an order of protection directing Grissom to stay away from the officers and the subway station were issued.