De Blasio unveils plan for health care for all New Yorkers, but there are skeptics 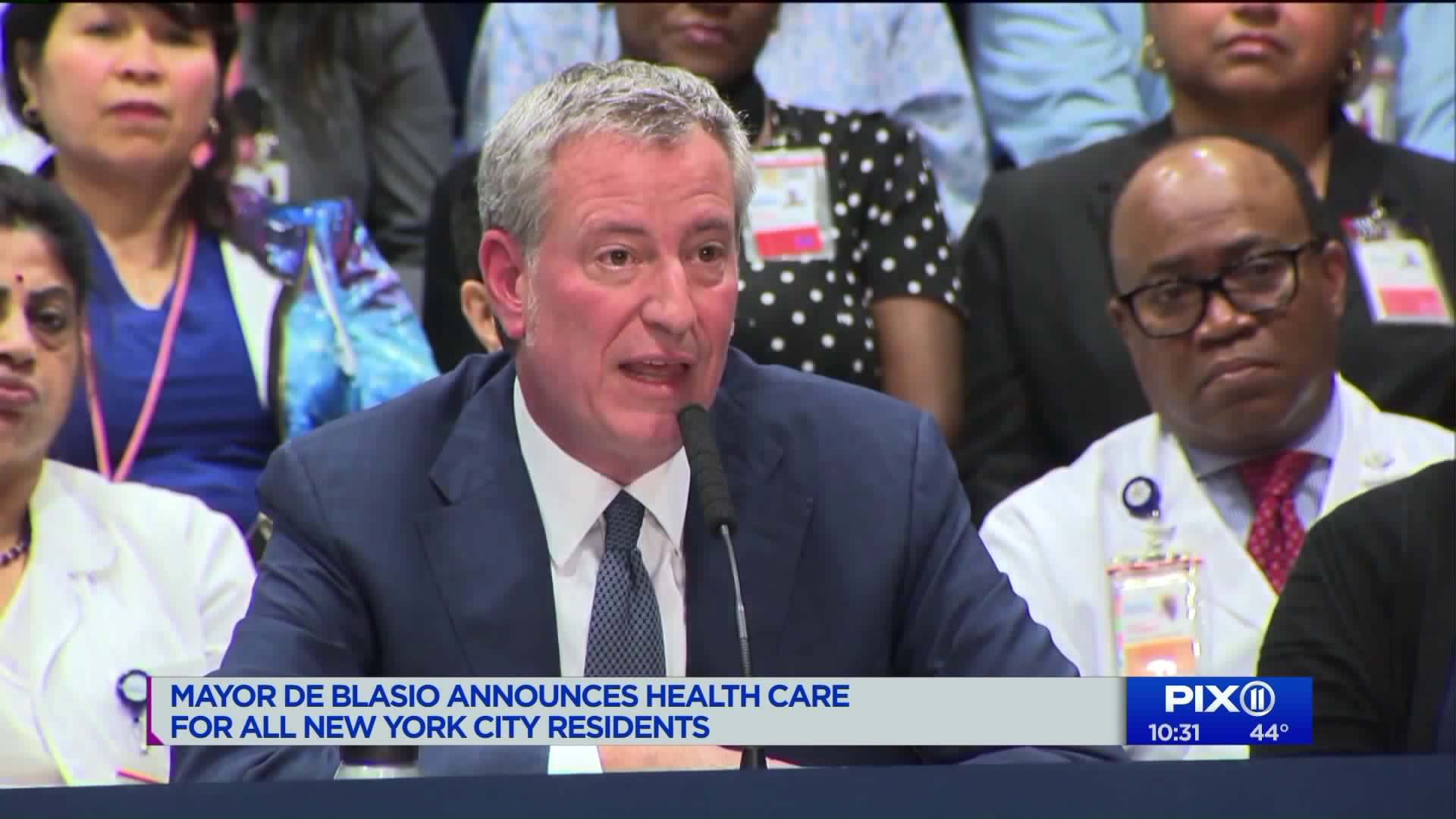 New York City will spend up to $100 million per year to expand health care coverage to people without health insurance, including immigrants who are in the U.S. illegally, Mayor Bill de Blasio announced Tuesday. The plan involves expanding the city`s existing public insurance program and providing uninsured people with access to affordable care at city-owned facilities. 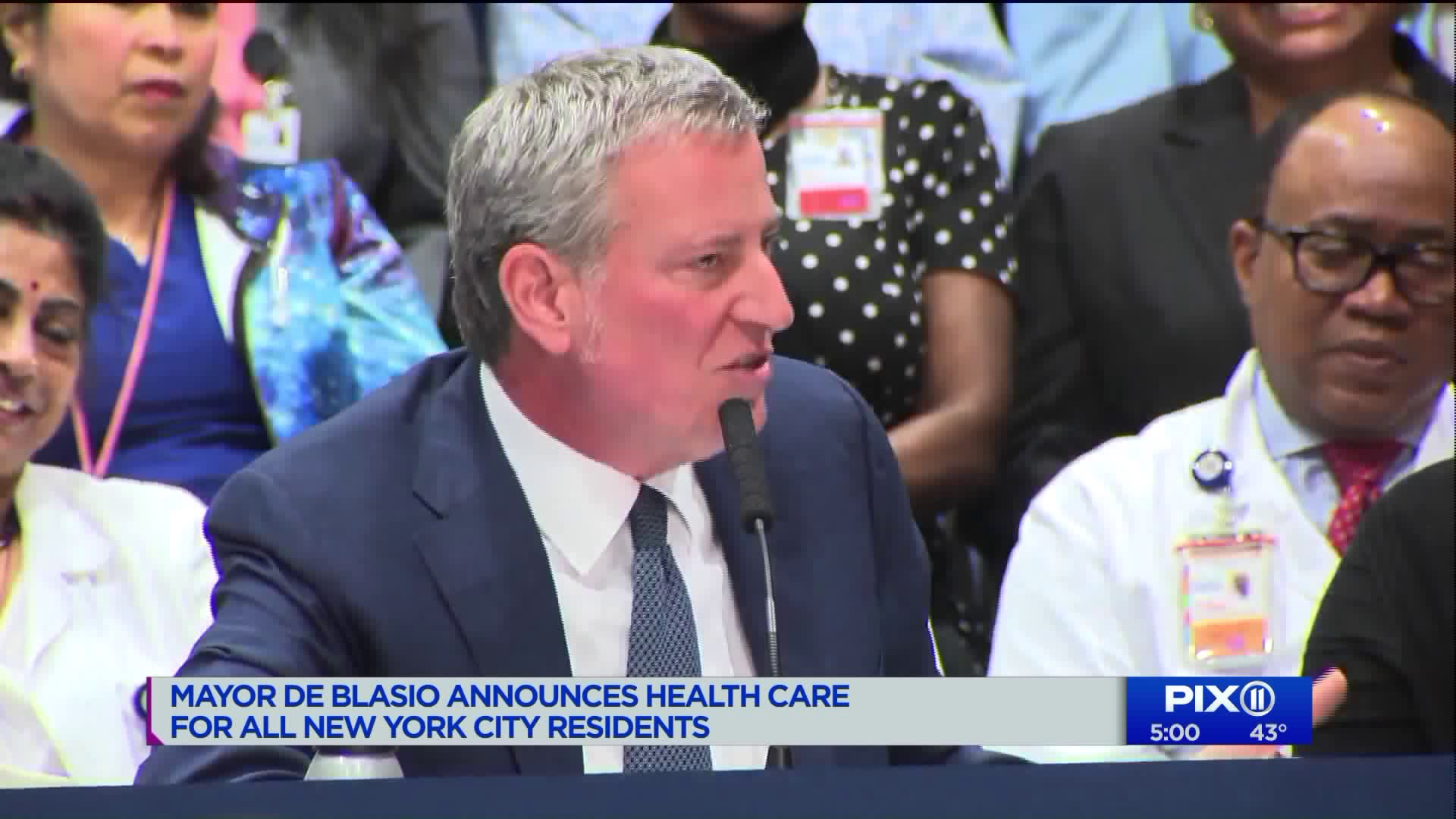 MELROSE, the Bronx — It's the biggest development in health care since Obamacare became law, and with a formal announcement of universal health care in New York City on Tuesday afternoon, Mayor Bill de Blasio thrust himself and the city into national debates on two key issues.

Specifically, the mayor's announcement that all New Yorkers -- including undocumented residents -- will have access to primary medical care, places New York City into the middle of national policy questions regarding both immigration and health care.

The mayor made the announcement at a news conference at Lincoln Hospital. Behind him were four rows of doctors from the hospital's emergency room -- one of the ten busiest in the country.

"Everyone behind me wishes people were not getting their first care at the emergency room," Mayor de Blasio said, as he announced a new program, called NYC Care, that he said will provide full health care coverage to all New Yorkers. "No one will be turned away."

"Is this something that should be handled in Washington D.C. and Albany?" he continued. "Yes it should."

The New York state legislature is expected to consider having universal health care statewide, when the assembly and senate meet later this year. In the meantime, the mayor said, it's up to the city to lead on the issue.

He said that the city will expand its MetroPlus health care program for lower income New Yorkers to cover all New York City residents, whether or not they're in the country legally. Right now, according to city health department statistics, some 600,000 residents rely on emergency rooms as their source of primary care. About half of that number, or 300,000 New York residents, are undocumented.

The costs to provide them with care are high.

According to fairhealthconsumer.org and nerdwallet.com, the cost of visits to the emergency room can range from $294 to nearly $4,000 per visit. With 600,000 New Yorkers uninsured, and with them relying on emergency rooms for no-cost treatment when they get sick, the annual cost is potentially in the hundreds of millions of dollars. Since many of the E.R. visits in New York City are to city-run hospitals, taxpayers end up picking up the tab, according to the mayor.

By contrast, de Blasio said, his plan would cost about $100 million. The lower cost was due in part, he said, to more people being healthier generally, because they'd no longer have to rely on emergency rooms for care.

Instead, he said, people would register for NYC Care. Once they were in the system, they'd initially call 311 to find out the name and location of a doctor who was also registered in the NYC Care system, who could see to their needs.

Not everybody is convinced that the program is a good idea.

Among the critics was Nicole Malliotakis, a state assembly member from Staten Island, who had also run against de Blasio in the last mayoral general election.

"Our citizens have a hard enough time covering their own healthcare costs," said Malliotakis in a statement. "Now Mayor de Blasio also wants them to pay for the healthcare of 300,000 citizens of other countries.The Mayor must stop abusing the middle class and treating us like his personal ATM."

PIX11 News asked the mayor for a response.

"I think that for a lot of middle class New Yorkers," he said, this could be the opportunity for them to see that the health care system is working universally. "It'll be good for everyone," de Blasio said.

Some patients at Lincoln Hospital who spoke with PIX11 News expressed skepticism.

“I'll believe it when I see it,” said Bronx resident Lydia Ortiz, who’d said that she’d used the city's MetroPlus system on Tuesday to cover the cost of her hospital visit. “The mayor could promise a lot of stuff and not do it,."

Still, she and everyone else who spoke with PIX11 News at the hospital said they're cautiously optimistic. That included the Brown Family, who get their insurance through a private insurer.

“At least you'll have your own primary doctor to deal with,” Terrence Brown said about the mayor’s universal care proposal. “I think it’s great that he's doing it.”

“It’s happening other countries, different places,” she said. "It's working well there, so why not come to a place where we have so many people who needs it, and give it to them? Make it work."

Mayor de Blasio said that will take about two years for the system to fully cover all New Yorkers. He added that he’ll talk about NYC Care further in his State of the City address on Thursday.