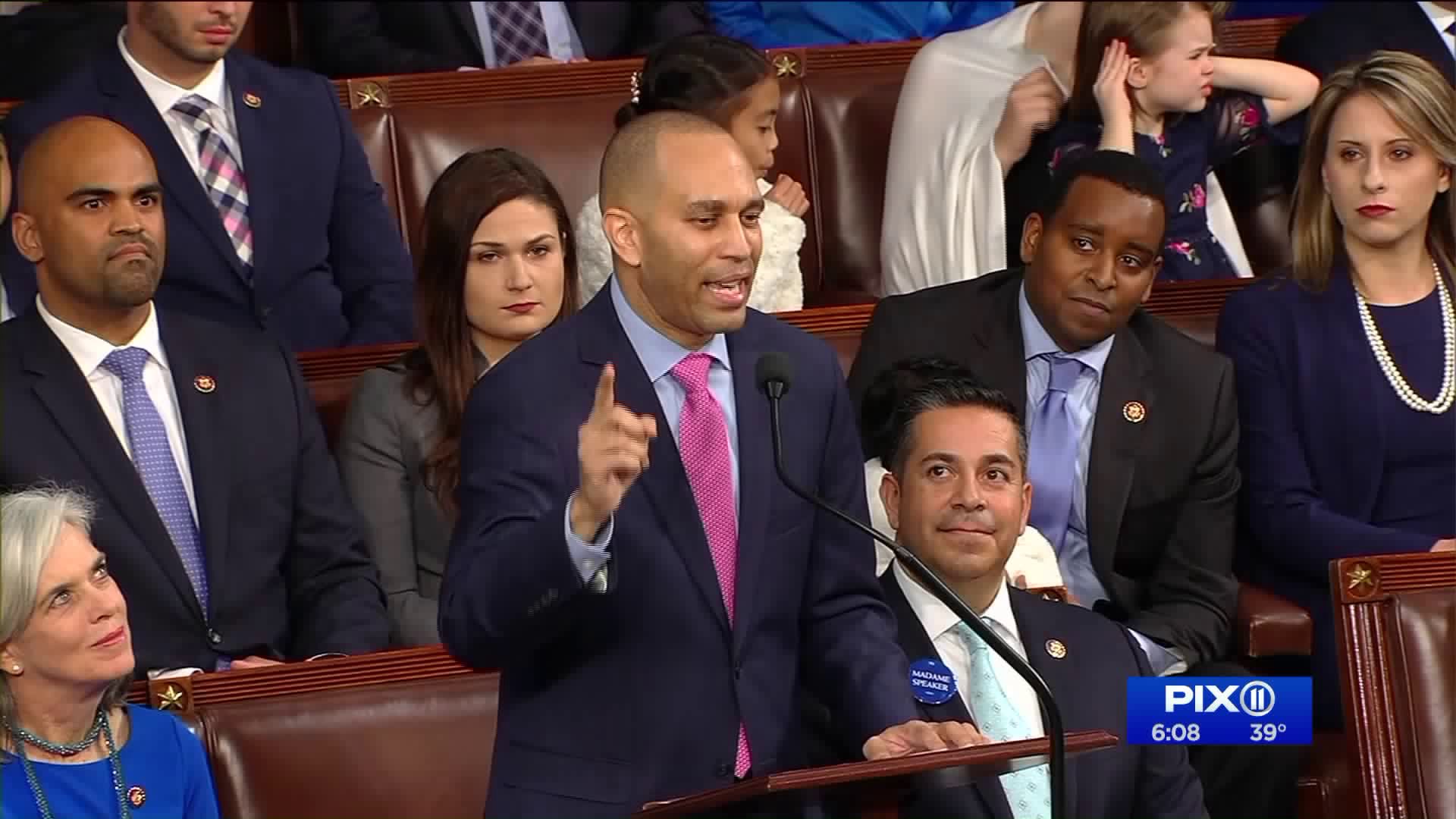 The ten new representatives are all Democrats. They were elected in November.

CAPITOL HILL — The new Congress — with the most women, and ethnic and religious diversity ever — is now sworn in. Its diversity is reflected in the Tri-state's congressional delegations, and in their members' personal stories. That diversity also appears almost exclusively on one side of the aisle.

The 116th Congress began with a New York congressman of color being showcased as a congressional leader. Hakeem Jeffries, Democrat of Brooklyn and Queens, is now the chair of the House Democratic Caucus, making him the fifth most powerful member of his party in the House.

Jeffries was selected to introduce the new speaker of the House and, in the process, he made history by using the first ever hip hop reference in such an introduction.

"House Democrats are down with N.D.P.!" Jeffries announced from the podium, "Nancy D'Alesandro Pelosi!"

Her new job of leading Congress in the middle of the government shutdown, as well as trying to end it, won't be easy, as another New York congressman on Capitol Hill pointed out.

That statement from the veteran GOP congressman is easier said than done. His party is, for the first time in eight years, in the minority in the House of Representatives.

It's been widely reported that the new congress is the most diverse ever, but not everybody realizes that that diversity has been achieved by one party, only. The record number of women and people of color to assume office are all Democrats.

"When we have a place in D.C that reflects that, we're heading in the right direction," said Antonio Delgado, a Latino and African-American whose district covers the Catskill Mountains and the Hudson Valley.

"We bring, kind of, the voices of America," she told PIX11 News, in support of Democratic Party diversity.

She hopes the party's example will spread.

"Hopefully, we can bring everyone along with us," she said.

Sherrill has the distinction of having flipped her congressional seat from red to blue by the biggest margin in all of Congress.

As impressive as that is, a throng of dozens of camera crews and supporters outside of the office of Alexandria Ocasio-Cortez on Thursday showed that she is the most popular new member of the 116th Congress.

She acknowledged her constituents, as she recognized, in a press gathering outside of her office door, that she was able to assume that office because she'd unseated one of the most powerful congressmen, former Democratic Caucus chair Joe Crowley, in order to represent the Bronx and Queens in the House.

"Their vote was as courageous as any other political act this year," said Ocasio-Cortez, who has also said that she's a democratic socialist.

Of note here on the Hill is that Ocasio-Cortez, at 29 the youngest person ever elected to Congress, held a reception for her supporters in her small, new House office. By contrast, Sherrill, the freshman New Jersey congresswoman, was given a committee hearing room in which to host her swearing-in reception. It could be seen as an endorsement of Sherrill's potential in her career.