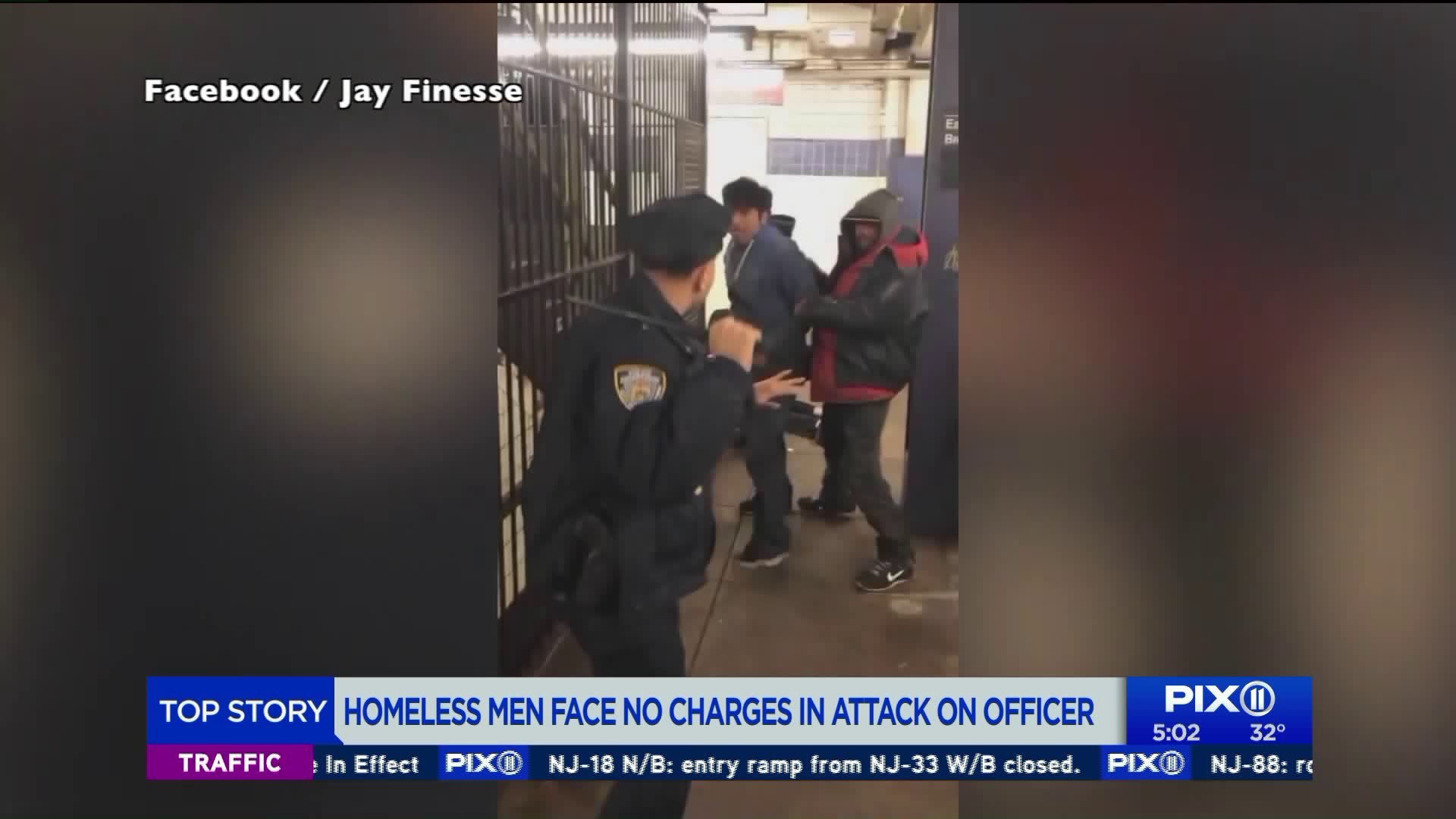 The District Attorney is under fire after no charges were filed on the five alleged suspects who attacked a police officer at a Manhattan subway station.

LOWER EAST SIDE, Manhattan — A group of men captured on video attacking an NYPD officer will face no charges on the incident.

Officer Syed Ali is being hailed for keeping his cool during a standoff against five homeless men at a Manhattan subway station. He was presented with a citation on Christmas Day for showing restraint and discipline in how to de-escalate a tense situation.

Video of the incident was viewed millions of times on social media.

Mayor Bill de Blasio also praised Officer Ali, who is a transit cop and army combat veteran, adding the attack of an officer won’t ever be tolerated.

What extraordinary professionalism and bravery by NYPD Officer Syed Ali. Attacking our men and women in uniform won’t ever be tolerated. The NYPD is upping its presence at this station and others to ensure officers have the support they need. https://t.co/rWEAf48DEk

The Manhattan District Attorney is under fire after dropping charges against Oseas Garcia, 32, Juan Nunez, 27, Raul Ruiz, 29, Elisea Alvarez Santos, 36, and Leobardo Alvarado, 31 , who were arrested for sleeping in the subway on Dec. 24.

The District Attorney's office added they were not aware that the men were suspected of anything other than sleeping on the subway, which occurred on a different day than the altercation, but will assist the NYPD in its investigation.

“There is no telling how much damage these mopes would have done to that courageous police officer had he not been equipped to handle them. The District Attorney’s job is to prosecute crimes, not to act like a social advocate. As the District Attorney continues to decriminalize criminal behavior in the subways, we can expect to see the safety of our mass transit system deteriorate.”

Former Police Commissioner Billl Bratton agreeing in a tweet, “His situation is a reminder to New Yorkers and their political leaders that NYC’s decline in the ‘70s and ‘80s began in the subways. The warning signs are all there for it to happen once again.

According to the most recent NYPD statistics, transit crimes are up 16.6 percent since 2010.

Kudos to this NY cop on his performance. His situation is a reminder to New Yorkers & their political leaders that NYC’s decline in the 70s & 80s began in the subways. The quality-of-life declines & warning signs are all there for it to happen once again. https://t.co/9ElS54V4NM pic.twitter.com/68DKn5NKKX