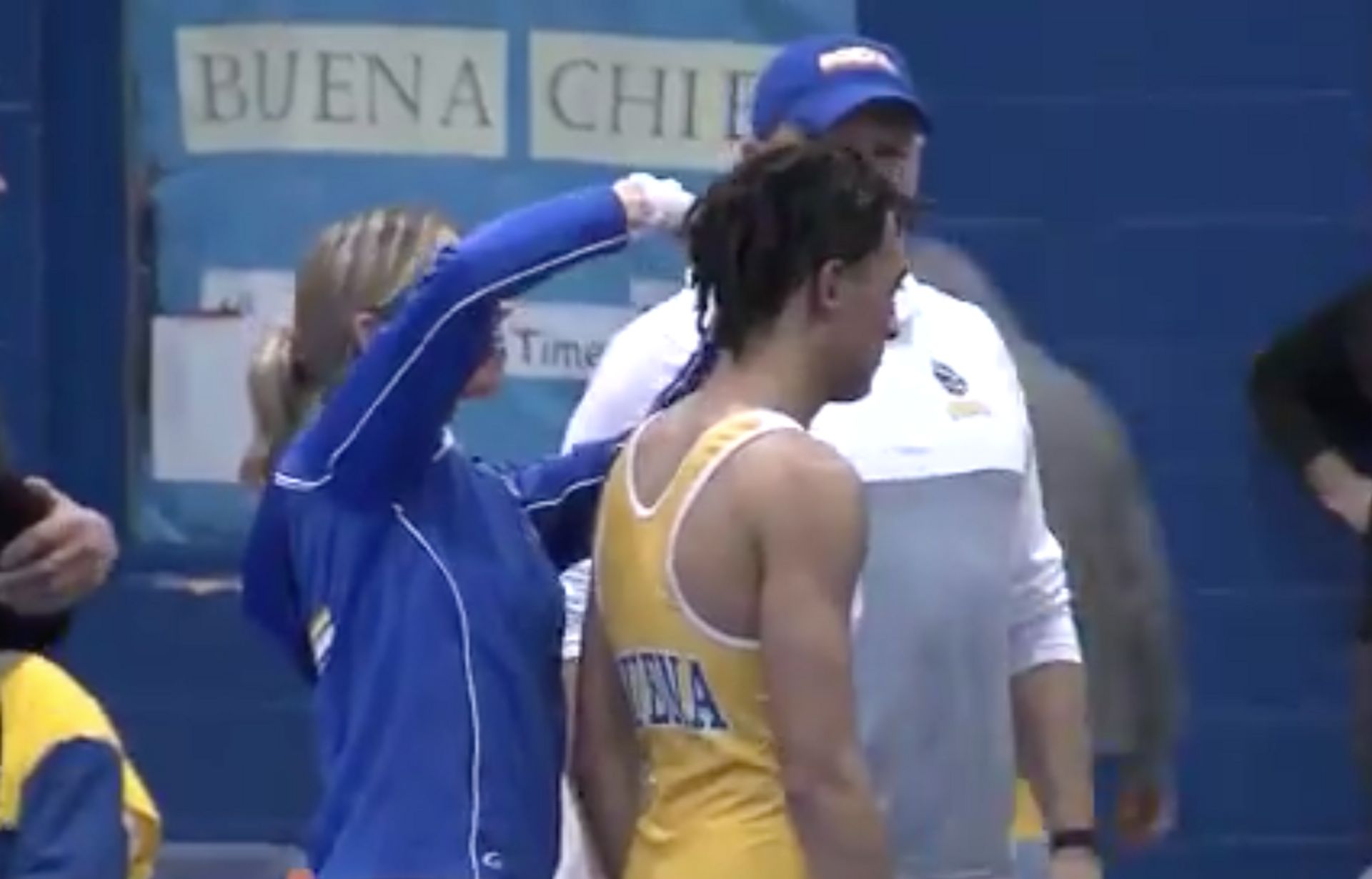 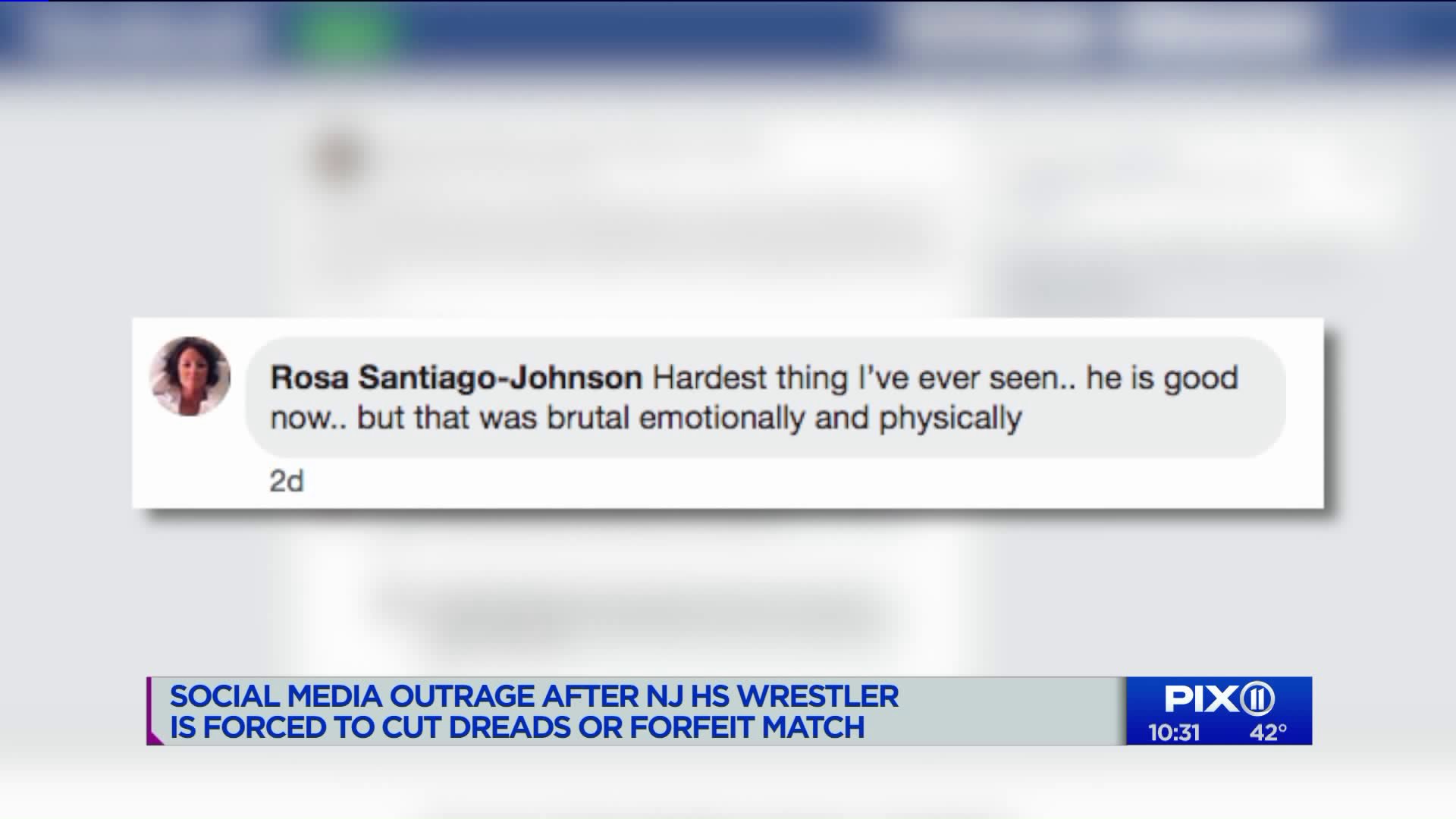 BUENA, N.J. — "[ It was the] hardest thing I’ve ever seen.. he is good now.. but that was brutal emotionally and physically." This was sentiment shared in a   Facebook  post by Rosa Santiago-Johnson after witnessing the moment her son was forced to make a decision to have his dreadlocks cut before his wrestling match in New Jersey.

Andrew Johnson, a New Jersey high school wrestler had his dreadlocks cut off minutes before his match after a referee told him to lose the hairstyle or forfeit his bout.

Epitome of a team player ⬇️

A referee wouldn't allow Andrew Johnson of Buena @brhschiefs to wrestle with a cover over his dreadlocks. It was either an impromptu haircut, or a forfeit. Johnson chose the haircut, then won by sudden victory in OT to help spark Buena to a win. pic.twitter.com/f6JidKNKoI

He went on to win Wednesday's match, but appeared visibly distraught.

Johnson, who is black, had a cover over his hair, but the referee Alan Maloney, who is white, said that wouldn't do.

The state's Interscholastic Athletic Association said in a statement they are recommending Maloney not be assigned to any event until the matter has been reviewed more thoroughly.

The Division on Civil Rights has also opened an investigation into what happened, said Leland Moore, a spokesman for Attorney General Gurbir S. Grewal.

The school superintendent said in a letter to the community that they support and stand by all student athletes.

"The student-athlete made the decision to have his hair cut, at that moment, in order to avoid a forfeiture of the match," wrote Superintendent David Cappuccio, adding that school officials reached out to the athletic association afterward.

The referee will no longer be 'permitted to officiate any contest that include any Buena Regional School district student-athletes' according to a statement from the superintendent.

The video was shared widely on social media, with users calling the incident "racist," ''cruel" and "humiliating."

Maloney came under fire in 2016 for using a racial slur against a black referee, according to the Courier Post newspaper.

At a private gathering between officials at a condominium, Maloney allegedly poked referee Preston Hamilton, who is black, in the chest and allegedly used a racial slur during an argument over homemade wine.

Hamilton slammed Maloney to the ground, according to the Courier Post.

Maloney told the newspaper he did not remember making the comments.

After Hamilton reported the incident, Maloney agreed to participate in sensitivity training and an alcohol awareness program. Maloney was to be suspended for one year for his use of the slur and Hamilton would receive the same suspension for assaulting Maloney. Both officials appealed their suspensions, which were overturned.

A woman answering the phone at a listed number for Maloney said the ordeal is being blown out of proportion and the referee was simply following rules.

Wrestlers are allowed to wear legal hair covers during matches, according to wrestling rules set by the National Federation of State High School Associations, NJ.com reports .

If a wrestler's hair in its natural state extends below the earlobe on the sides or touches the top of a normal shirt, it's required to be secured in a hair cover.

The ACLU of New Jersey tweeted that the incident isn't about hair, but rather about race.

"How many different ways will people try to exclude Black people from public life without having to declare their bigotry?" it reads. "We're so sorry this happened to you, Andrew. This was discrimination, and it's not OK."

Gov. Phil Murphy also acknowledged how he was "deeply disturbed" by the incident.

"Deeply disturbed that Andrew Johnson, a student at Buena Regional H.S., was forced to choose between keeping his dreadlocks and competing in a wrestling tournament. No student should have to needlessly choose between his or her identity & playing sports," he tweeted.

The incident remains under investigation.