Brooklyn streets to be co-named in honor of Biggie Smalls, Woody Guthrie; Staten Island street to be named for Wu-Tang Clan 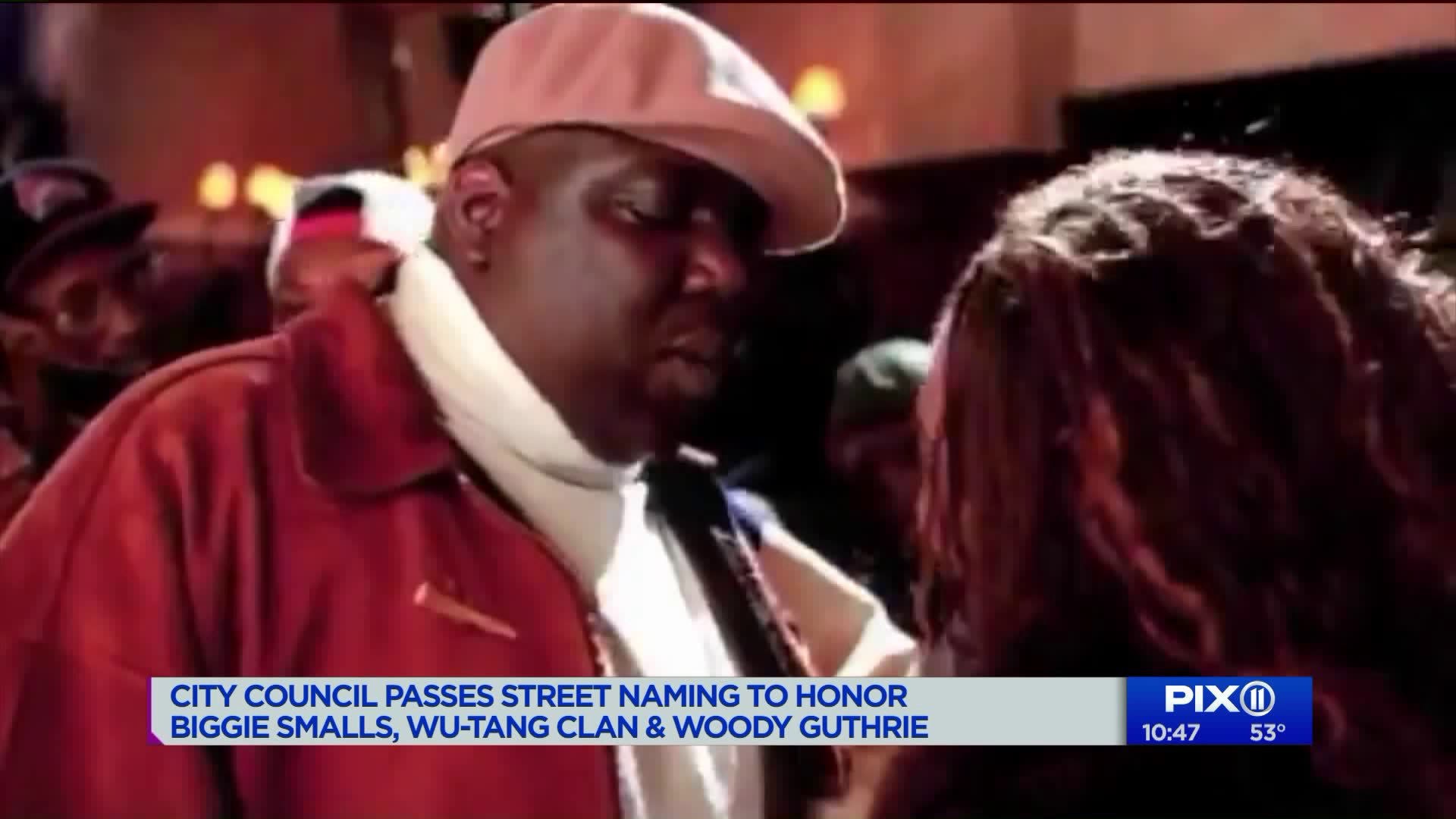 Before he took the moniker Notorious B.I.G., aka Biggie Smalls and became a star, Wallace was a Brooklyn kid.

Wallace was murdered in Los Angeles in 1997. He’s considered by many to be one of the greatest rappers of all time.

Before he took the moniker Notorious B.I.G., aka Biggie Smalls and became a star, Wallace was a Brooklyn kid.

“This is where Biggie grew up down the street on 226 St. James Place,” said community advocate LeRoy McCarthy. “He’s a Brooklyn through and through type a guy his family loves Brooklyn it’s good to honor him here.”

McCarthy has spent nearly five years pushing for street co-namings for both Biggie and the Wu-Tang Clan.

“New York City is the birthplace of hip-hop but I don’t think New York City really honors the art form like they should this is happening now and I’m glad to be part of it,” said McCarthy. “It’s good to honor Biggie Smalls and the Wu-Tang, Wu-Tang is a very special group they are a very special organization in hip-hop royalty.”

Earlier this week, the City Council voted 48-0 to co-name 68 streets. Three of them for music legends in their home boroughs.

Christopher Wallace Way will be at the corner of St. James in Fulton Street in Bed-Stuy.

The Wu-Tang Clan District will he located at Target Street and Vanderbilt Avenue in Staten Island.

Woody Guthrie Way will be located on Mermaid Avenue between West 35th and 37th Streets in Coney Island. That’s where the folk singer lived.

Everywhere you look at at the intersection of St. James and Fulton, Biggie lives on. The Key Food where he bagged groceries as a teenager is still there. There are several pieces of art in his honor, several by local artist Vincent Ballantine.

“His first video Juicy it was shot right on this block right on this intersection started right in front of the barbershop he came back to where he came from.”

Mayor de Blasio is expected to sign the legislation into law to co-name the streets after the new year.

“Biggie is an iconic figure, his rap style and his bravado is something that encapsulates Brooklyn,” said McCarthy. “The world looks at Brooklyn and they think of Biggie Smalls.”

As for McCarthy, he tells PIX11 his next push will be to get street co-namings in Manhattan for the Beastie Boys and in the Bronx for Big Pun.