5 subway stations will get replacement elevators 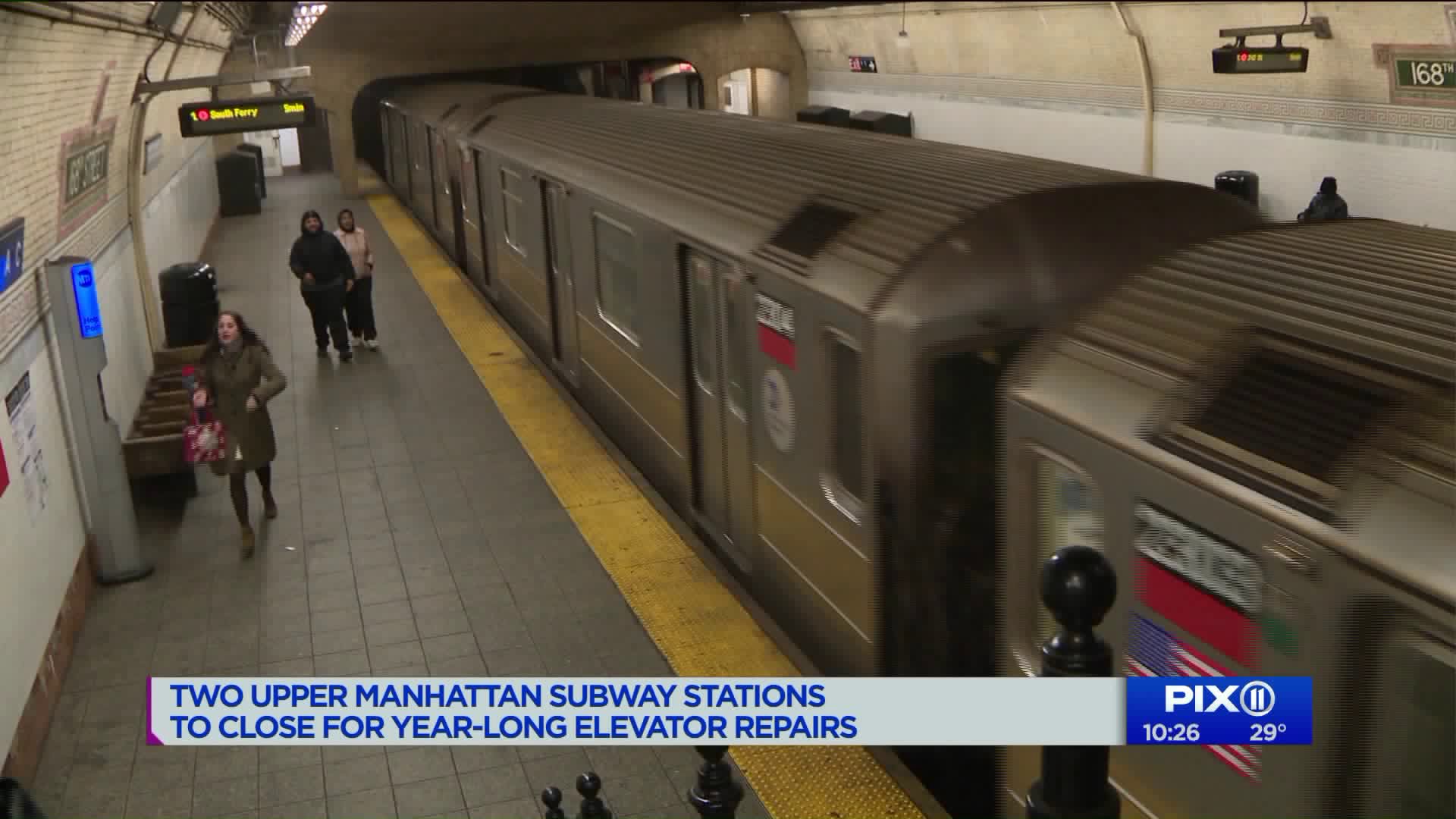 UPPER MANHATTAN — This is the deep underground.

Two MTA stations along the 1 line in Upper Manhattan at 168th and 181 Streets will close at different times for one year to allow for major elevator replacement projects.

Three others will also undergo construction to upgrade and replace elevators, but those three will remain open.

"The stations have endured a great deal of water intrusion and decay over the years, which has meaningfully reduced the reliability of these elevators," the MTA said in a media release.

The locations in Washington Heights and Upper Manhattan are the deepest in the system. At the 168th and 181st Street Stations, the elevators provide the only direct access to the trains.

Three of the stations were built in the early part of the 20th Century. The agency says that many of the elevator components are" nearly a century old."

During the project, M5 bus service in the area will be enhanced, transit planners say.

Also, the MTA Board approved a second transfer along routes involving these specific stations during the work.

The news release says customers will also find a free MetroCard transfer on the M3, M4 or M5 buses between 157th and 168th streets.

"Customers are encouraged to use the 168th Street A and C service, which will remain available while work is being done on the 1 line portion of the station. Customers may transfer between the 1 and the ABCD lines at the 59th Street Columbus Circle station. There is also a free walking transfer between the 1 stations at 215th Street or 207th Street and the Inwood—207th Street A line station. 1 trains will begin bypassing the 168th Street station on Saturday, Jan. 5, 2019."

Additionally, three-legged transfers—which is unprecedented and requires board approval—will be allowed on a "limited basis so that costumers avoid paying two fares."

"For example, a rider from the Bronx wishing to get to the   line may take the Bx10, transfer to the Bx7 and then swipe into the   station at Inwood—207th Street on one fare (bus to bus to train).  Going northbound, a customer may take a bus to the train, and then transfer at 157th Street to the M5 and ride to 168th Street on one fare (bus to train to bus)."

“Replacing these elevators is long overdue and critical for reliable access to these unique ‘deep stations,’ and we’ve put together a schedule that takes care not to cause unnecessary inconvenience for customers,” said MTA New York City Transit President Byford.

Signs about the project are posted near the elevators at the 168th Street Station on the 1 train.

PIX11 News Reporter Greg Mocker spoke with riders at the location about the work. They told him the breakdowns are frustrating. This work will add about 10 to 15 minutes to some of their commutes. They hope the work can be finished as quickly and as safely as possible.

MTA personnel say they began community board and elected official outreach during the summer and have been in regular contact with Community Board 12 to review travel alternatives during the first project.

The projects do not make the stations fully accessible due to the depth of the platforms.

NYC Councilmember Ydanis Rodriguez (D-Washington Heights) has called for action at the elevators. He says he will be in contact with the transit agency to make sure bus service and transfers are accommodating commuters during the work.