2 on desk duty after outrage over video of baby yanked from mom at benefits office, but family skeptical 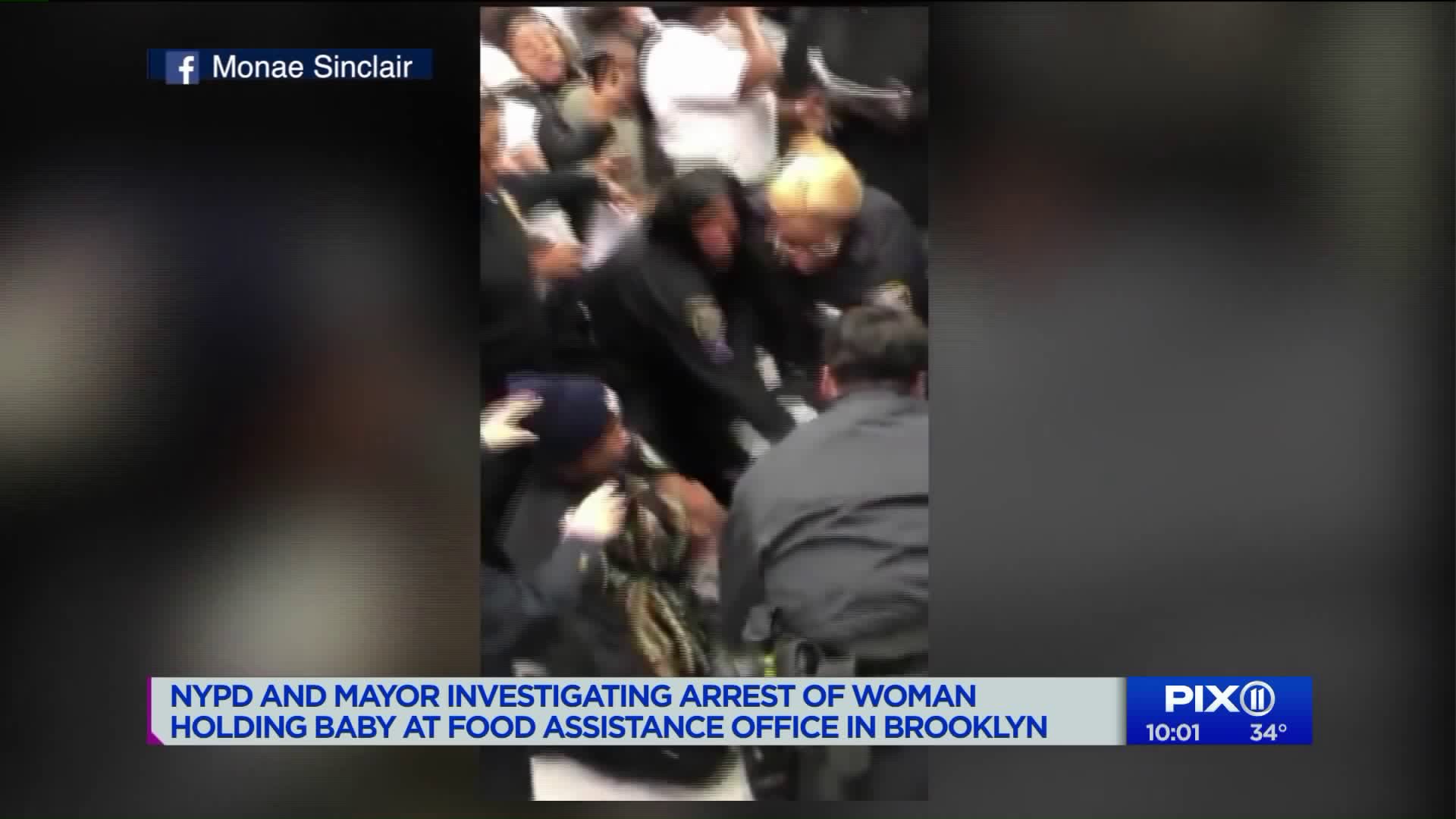 Outrage built Monday over a video showing police officers violently yanking a toddler from his mother`s arms at a Brooklyn public benefits office, with officials criticizing police for not de-escalating the situation and clients of the facility complaining it is indicative of how the city treats social-services recipients. 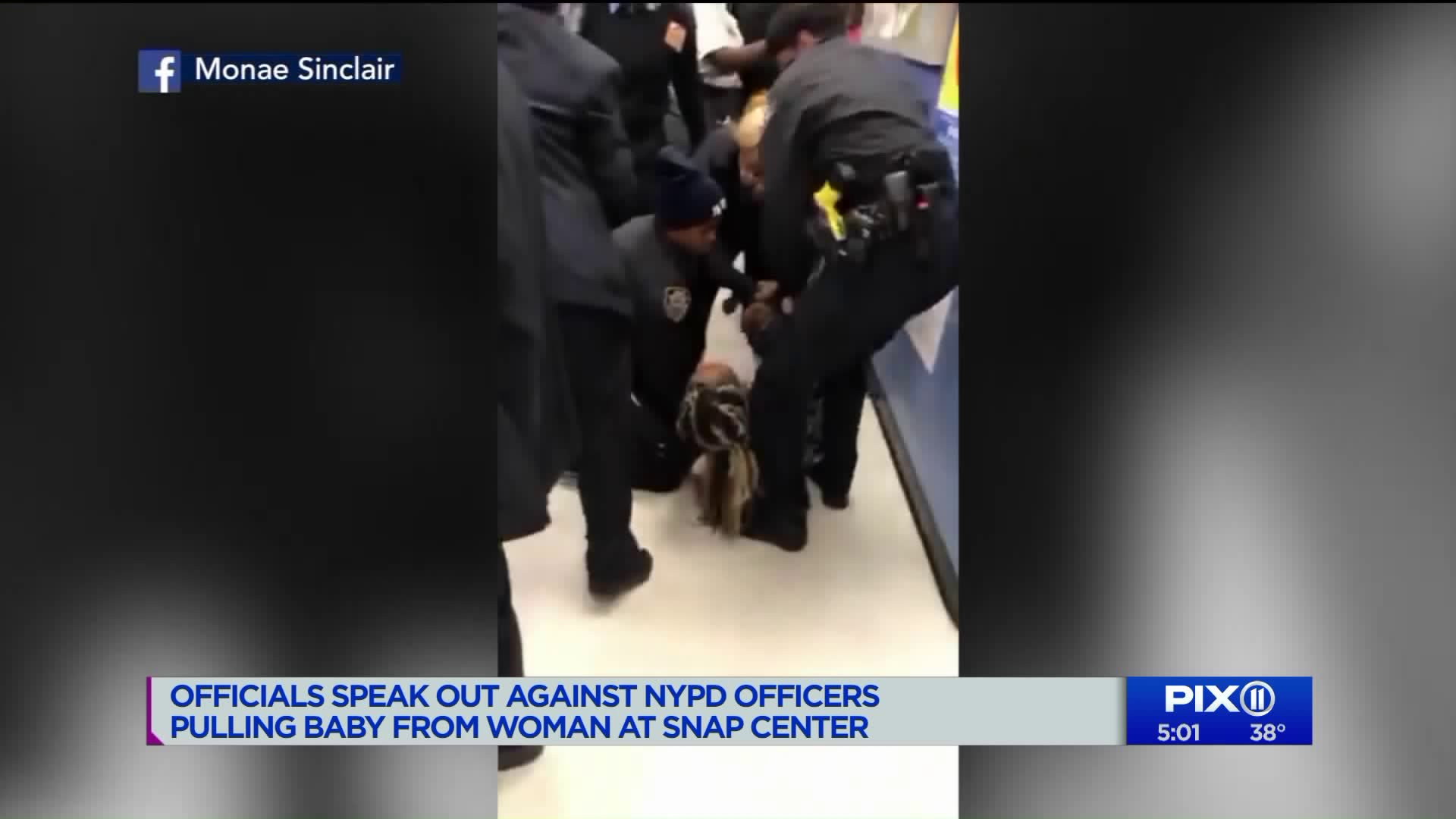 BOERUM HILL, Brooklyn — It’s video that’s been viewed, shared and commented on hundreds of thousands of times worldwide on social media, and exponentially more times than that on other media. The video of a baby being pried out of his mother’s arms by police as they try to arrest her has prompted strong reactions from both local officials, and from the family of the mother, Jazmine Headley, 23.

Some officials have now called for charges against Headley to be dropped, and for the officers involved — and NYPD officers, generally — to be retrained, at the very least. Headley’s family is calling for the officers’ dismissal.

The incident happened on Friday, when Headley had taken a day off from work in order to go to the Human Resources Administration, or HRA, office to figure out how to extend day care benefits for her 1-year-old son, Damone, which she’d recently learned were being discontinued.

There was a four-hour wait inside, according to the Brooklyn Defenders public legal assistance office, which is now representing Headley. When she’d gone to the HRA office, she sat on the floor, with her child, because there were no seats, Brooklyn Defenders Executive Director Lisa Schreibersdorf said on Monday.

Headley had refused to get off the floor when she’d been told to do so by a security guard, and a conflict apparently ensued. Security called the NYPD. A sergeant and three officers responded. They tried to remove Headley, but needed to remove her child from her first. When she resisted, all of the officers, as well as at least one security guard, forcibly separated the mother and baby son, while witnesses' smartphone cameras recorded.

Eventually, she was arrested and charged with resisting arrest, acting in a manner injurious to a child, obstructing governmental administration and criminal trespass.

Her son, a tall, precocious early toddler, was turned over to his grandmother for care, while Headley was sent to Rikers Island, where she remains, on the NYPD charges, as well on an outstanding warrant out of New Jersey for failure to make an appearance on a credit card fraud arrest.

Headley's mother, who, again, is now caring for the boy, is herself a security guard. She said that the actions of the guards at the HRA center were counter to their purpose.

"I brought her up to be respectful," Jacqueline Jenkins told PIX11 News about her daughter.

She said that her daughter knows better than to have escalated the situation, "with the NYPD, or anybody," Jenkins said.

Also discussing escalation on Monday was Brooklyn Borough President Eric Adams, who is a former NYPD captain. Along with Schreibersdorf, he held a news conference late Monday morning in front of the HRA office where the incident had taken place.

"You cannot escalate to that level," Adams said. "That was not an emergency. It was not a violent crime."

He commented further about a point in the video in which the NYPD sergeant pulls out her Taser and points it at the people in the crowded office who surrounded the melee.

"There was nothing in that scenario that showed that they should point the taser at the crowd or to children in that crowd," Adams said in response to a question from PIX11 News.

The incident provoked condemning statements, in the form of tweets, from City Council Speaker Corey Johnson, and from State Attorney General-elect Letitia James.

"This was a disturbing incident. Like anyone who's watched this video, I have a lot of questions about how this happened," he tweeted. "NYPD & HRA will get to the bottom of how this happened."

"HRA centers must be safe havens for New Yorkers needing to access benefits to improve their lives. I am deeply troubled by the incident and a thorough review was launched over the weekend to get to the bottom of what happened," Banks said. "I am reinforcing efforts to train officers and staff to better diffuse situations before the NYPD is called for assistance and directing refresher de-escalation trainings for HRA Peace Officers and FJC security staff immediately. The HRA Peace Officers who were involved in this incident are currently on leave, and they will be placed on modified duty when they return to work pending our investigation of what happened."

For their part, the Patrolmen's Benevolent Association, the labor union representing police officers, also issued a statement from its president, Pat Lynch.

"These police officers were put in an impossible situation. They didn't create the dispute at the HRA office -- as always, they were called in to deal with the inevitable fallout when the rest of our City government fails in its task," Lynch said. "Their objective was to enforce the law while protecting the safety of this mother, her child and every person in that office, some of whom were actively making a tense situation worse. The event would have unfolded much differently if those at the scene had simply complied with the officers' lawful orders. The immediate rush to condemn these officers leaves their fellow cops wondering: when confronted with a similar impossible scenario, what do you want us to do? The answer cannot be 'do nothing.'"

Despite all of the reactions, the family of the woman who's now behind bars, charged in the incident, were skeptical about it prompting any systemic reforms.

She did say that there was one change she most eagerly wanted to see.

"Those officers need to be fired," she said.