‘Trouble in Toyland’: Research group releases list of dangerous toys ahead of holidays 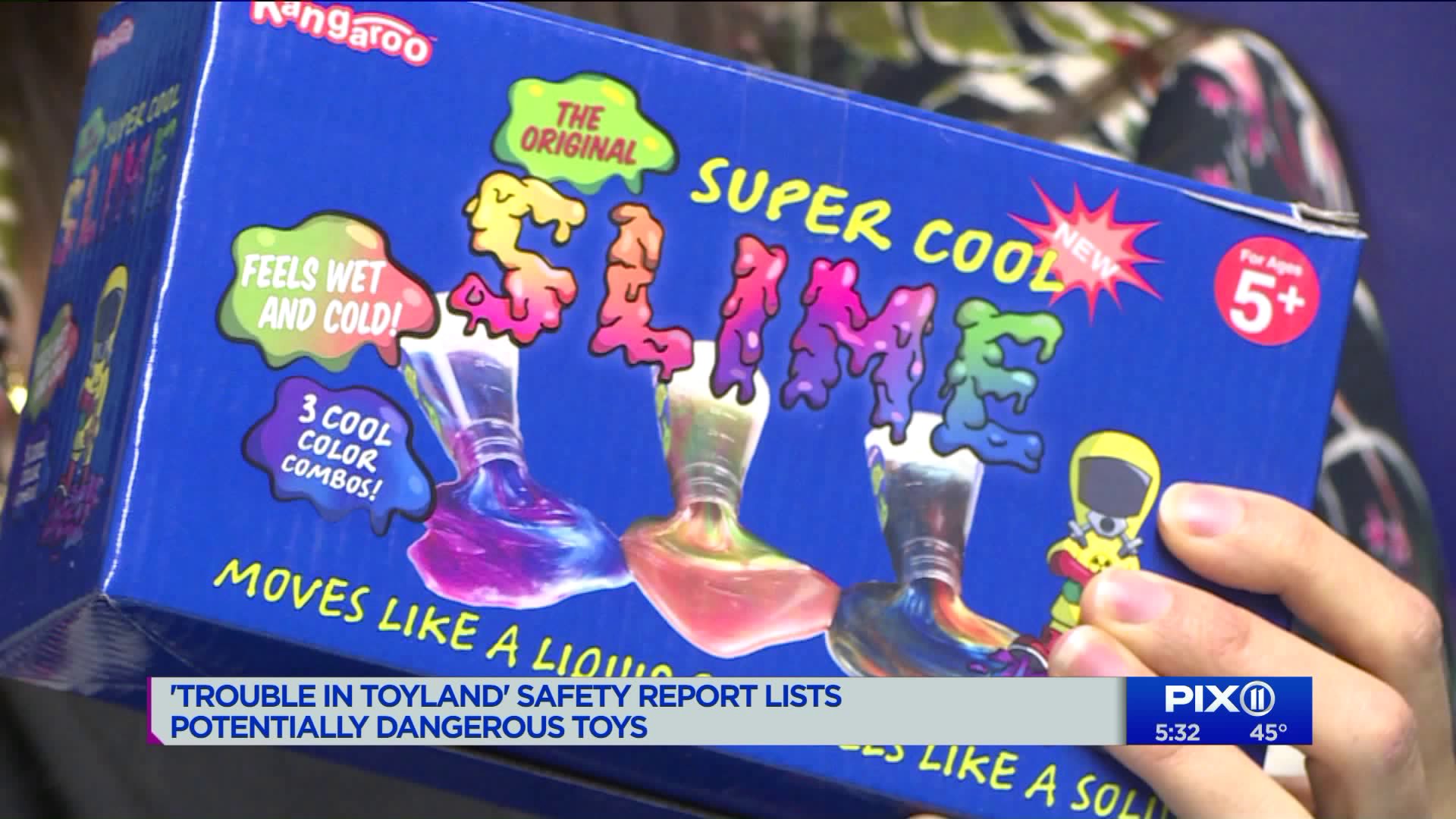 If you like to do the same, you can checkout NYPIRG`s full report at: https://www.nypirg.org/pubs/201811/NYPIRG_Toyland_Report_Nov18.pdf

NEW YORK -- As you get ready to start that holiday shopping, you might want to think twice about the toys you pick out for your kids.

Some of the most popular products sold online and in stores may pose a danger to your kids. Rafaella Smith says her 4-year-old son is king of the slime toys.

"Every kids party, in the toy bag, in the give away bag, there's a slime or there's a bubble or something like that that has these product in it," Smith said.

So she was shocked to learn it could contain toxic levels of boron: a chemical that, according to the EPA, can cause nausea, reproductive health issues, and even death.

"Finding out about this report scares the living daylights out of me because as a parent your first role is to make sure that your child is protected and safe," she said.

Smith learned about the potential dangers in the annual Trouble In Toyland safety survey conducted by The New York Public Interest Research Group. NYPIRG has produced the report for the last 33 years, but they say toy manufacturers are still putting our children at risk. This year they found 87 percent of balloons listed on Amazon failed to include a choking warning despite being labeled safe for kids as young as two.

"Without these warnings, some parents may allow a child to play with an un-inflated balloon and that can lead to accidental inhalation and potential suffocation," said NYPIRG Program Director Megan Ahern.

NYPIRG says the easiest way to test for an old fashioned choking hazard is with a toilet paper roll. If an object fits through the tube it's too dangerous for a child under 3. But there are also some new tech threats that parents should be on the lookout for.

"Our partners at the Mozilla foundation found that Wonder Workshops Dash robot may share user information with advertisers and may be selling this information to other third parties," said NYPIRG's Senja Strage.

They say those privacy concerns extend to several other smart toys including robots and tablets. So once again NYPIRG is calling on companies to put privacy and safety before profits.

"Toy manufacturers need to do a better job to ensure that their products are safe before they're ending up in children's mouths and hands," said Ahern.

But Smith isn't counting on that. She's spreading the word to her friends and family so they take matters into their own hands.

"Let's pay attention, let's wake up and make sure that we're giving our kids toys that are healthy and safe for them."

If you like to do the same, you can checkout NYPIRG's full report at: https://www.nypirg.org/pubs/201811/NYPIRG_Toyland_Report_Nov18.pdf