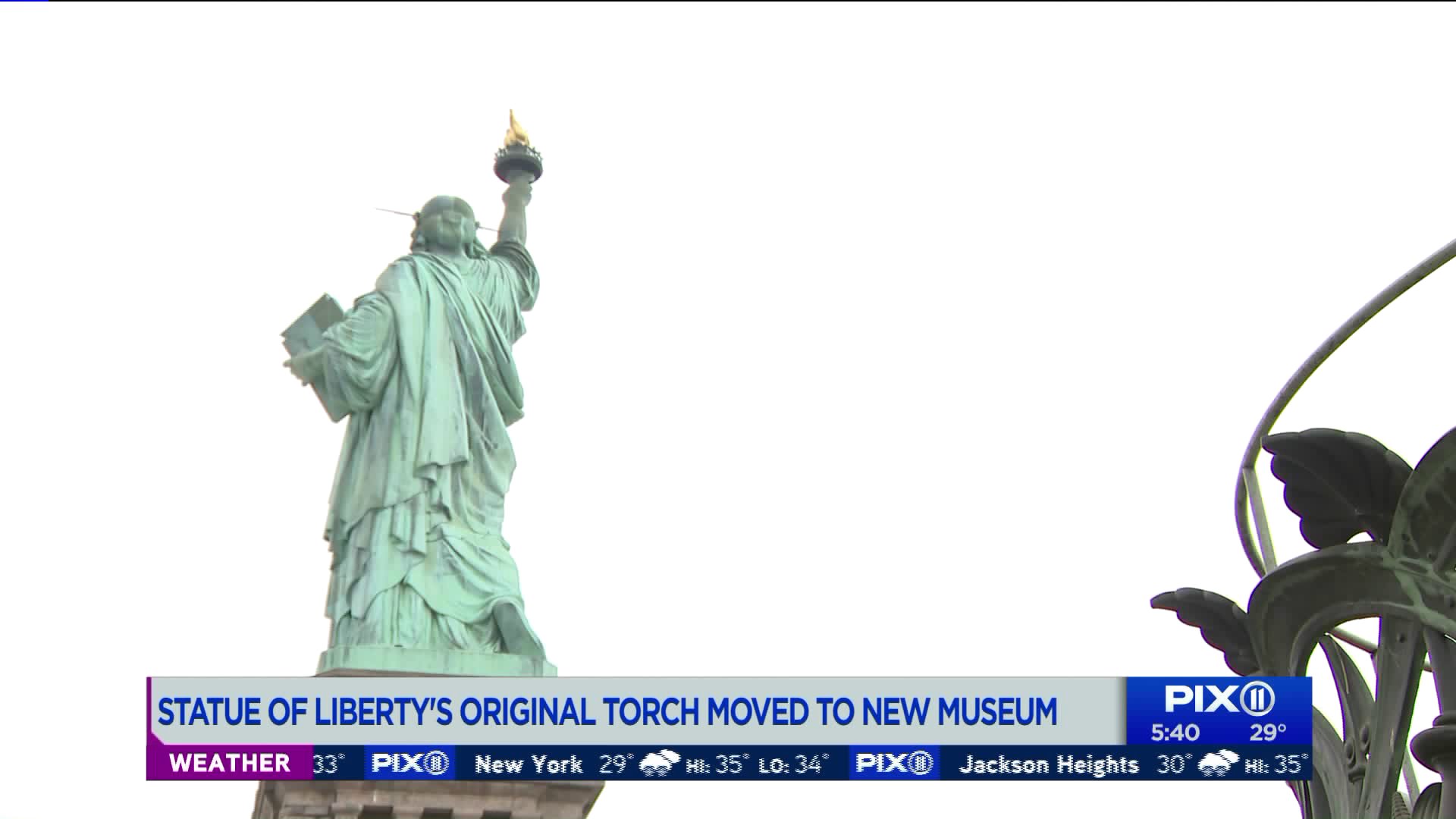 The Statue of Liberty`s original torch, which has been housed in the base of the statue since a replica replaced it in the 1980s, was moved across Liberty Island on Thursday to its new home in a museum that will open next year. Officials with the National Park Service and the Statue of Liberty-Ellis Island Foundation said the torch was removed in 1984 because it was too badly damaged to restore.

NEW YORK — The Statue of Liberty's original torch, which has been housed in a museum in the base of the statue since a replica replaced it in the 1980s, was moved across Liberty Island on Thursday to its new home in a new museum set to open next year.

Visitors watched as the base and the detached flame of the 3,600-pound (1,633-kilogram) torch were trucked on a specialized hydraulic transport vehicle, at the very careful speed of half-a-mile per hour. The torch cargo, along with a full-size, solid copper mockup of Lady Liberty's face, were moved to the construction site of the new museum, about 100 yards (91 meters) from the statue.

Officials with the National Park Service and the Statue of Liberty-Ellis Island Foundation said the torch was removed in 1984 because it was too badly damaged to restore.

"Taking it down was very frightening," said Stephen Briganti, president and CEO of the foundation. "We had the largest freestanding scaffolding that at that point had ever been built."

Thursday's brief trip to the museum site was the latest chapter for an icon that "has crossed many miles in its lifetime," Briganti said.

The torch left France in 1876 for the United States, where it was exhibited at the Centennial celebration in Philadelphia and then in New York City's Madison Square Park. The trip was intended to raise funds to pay for the statue's pedestal, Briganti said.

It went back to Paris in 1882, then returned to the New York Harbor along with other crated pieces of the statue in 1885.

The torch was held high by Lady Liberty from 1886 to 1984, but modifications to the flame changed its original design over the years.

The flame resembled a stained-glass sculpture lying on its specially designed flatbed truck. That's because the sculptor Gutzon Borglum, who also designed Mount Rushmore, "put all the holes in it with amber glass" during a 1916 redesign, park Superintendent John Piltzecker said. "It led to the flame's deterioration."

The torch was further weakened in July of that year by the Black Tom explosion, an act of German sabotage at a munitions plant nearby in Jersey City.

The old torch, meanwhile, made another fundraising trip at the end of 1984, traveling to Pasadena, where it starred in the Rose Parade.

A trench was dug under the statue so that the 16-foot (4.9-meter) original torch could be moved into the pedestal museum when it returned to New York.

It couldn't depart the pedestal that way Thursday, Piltzecker said.

"It had to come out in two pieces."

The torch, as well as the full-scale mockup of Lady Liberty's face, and a full scale mockup of one of her feet, will be highlights of the new $100 million museum, which is scheduled to open in May 2019.