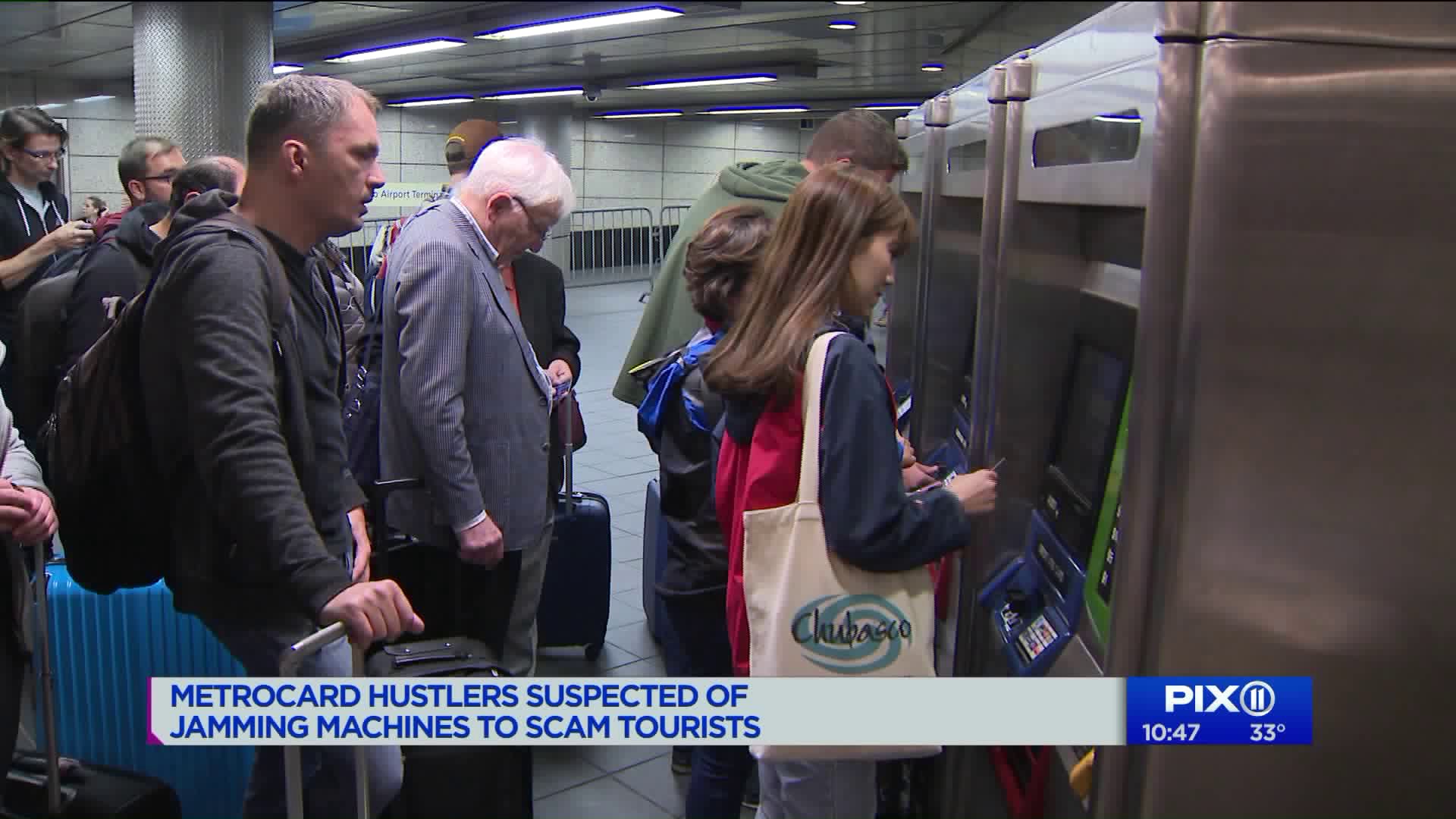 A daily commuter who moves through the Sutphin Boulevard transit hub told PIX11 a troubling situation has been going on there for at least three years.

QUEENS — A daily commuter who moves through the Sutphin Boulevard transit hub told PIX11 a troubling situation has been going on there for at least three years.

“Gangs control the front of the turnstiles,” the woman told us. “They don’t let tourists out of the station until they give up their MetroCards.”

The hustlers want the cards to “swipe through” other tourists arriving in the United States, who want to get into the subway system. A guy named Lavell said he’s seen the swipers in action and knows the fee.

“Two dollars, and they give you a transfer.”

When PIX11 decided to investigate on two recent weekdays, we saw several people—men and women—soliciting MetroCards from travelers who were leaving the subway system, pushing their luggage along, on their way to the AirTrain that would take them to JFK airport.

“I need the MetroCard for the AirTrain,” one German tourist relayed to PIX11, “but she asked me if she can have it,” the man said, referring to a nearby lady dressed in a powder blue running suit.

The woman looked at us stone-faced when we asked her if she’d asked the man for his card. She recorded images of the photographer and me on her smart phone.

The hustlers want the leftover fares on the tourist MetroCards so they can swipe new travelers into the subways.

During our first visit to the Sutphin Boulevard station, which is located at the hub where the AirTrain and Long Island Railroad stations meet the subway, we noticed long lines of tourists backed up at a MetroCard machine that appeared to be out of order.

A French tourist told PIX11, “We come from France and we have trouble to buy.”

A woman from Spain waiting on the line for the machine added, “They tried to sell me the card for the AirTrain or something; I wasn’t sure, so I said, ‘no.’”

A transit authority repairman said the MetroCard machines often break down because they’re deliberately jammed by the hustlers, known as ‘swipers.’

“That’s what they do; that’s how they make money,” the worker said. “This problem is in the major hubs like over here, especially where there are tourists.”

The repairman showed us how paper and left-over MetroCards are jammed into the machine’s slot, causing it to break down.

When PIX11 contacted the MTA, spokesman Shams Tarek wrote back, stating “Intimidating riders is absolutely unacceptable and intentionally jamming MetroCard vending machines in order to sell swipes is a crime that deprives the subway system of much-needed revenue. We’re working with the NYPD to have increased police presence and enforcement at known hotspots like Sutphin Blvd, where a special task force is engaged and extra police have already been deployed.”

The NYPD also got back to PIX11, when we contacted the department about our story.

“We are fully aware of the issues,” the NYPD’s Office of Public Information said. “We’ve made 12 arrests of swipers this year at that station. We’ve had joint operations with the MTA and we have more scheduled. We have people deployed there during the rush hours and the midnight tour.”

The NYPD also revealed to PIX11 a meeting is planned with the general manager of the Sutphin Boulevard station to discuss the swiper issue.