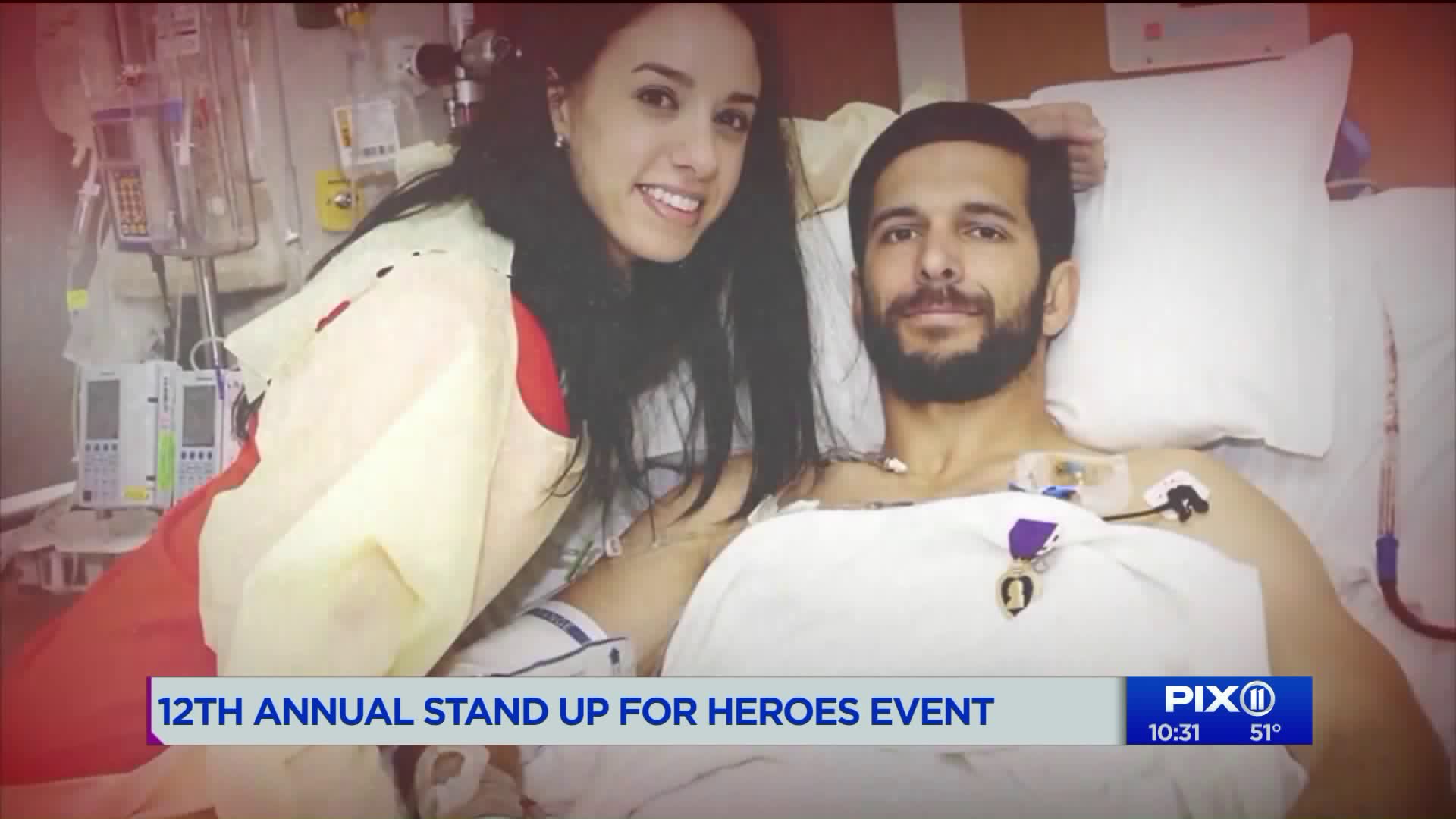 It`s a night to heal through laughter. Comedians Jim Gaffigan and Jimmy Carr walked the red carpet. Along with other headliners like Bruce Springsteen and Jon Stewart, they`re performing at the 12th annual Stand up for Heroes. Tonight it took place at the Hulu Theater at Madison Square Garden.

MIDTOWN - The stars of the comedy world were out in force Monday night, but the true stars to walk the red carpet were the military veterans at the “Stand Up For Heroes” event honoring wounded veterans.

It’s a night to heal through laughter. Comedians Jim Gaffigan and Jimmy Carr walked the red carpet. Along with other headliners like Bruce Springsteen and Jon Stewart, they’re performing at the 12th annual Stand up for Heroes. Tonight it took place at the Hulu Theater at Madison Square Garden.

“It’s focused on veterans and their families,” said Gaffigan. “It’s special among comedians and it just feels among all the important things. It’s a cool show.”

Stand up for Heroes honors the nation’s post 9-11 impacted veterans. It’s presented by the New York Comedy Festival and the Bob Woodruff Foundation. Funds raised go to the Woodruff Foundation, which distributes money to programs helping wounded veterans, service members and their families.

Lee works with veterans who are facing mental health challenges. He and his wife, Kim, both struggled with depression during and after their service. Kim Lee is a U.S. Air Force Veteran.

The Lees found healing through programs supported by the Woodruff Foundation.

The work of the foundation is very personal for Bob Woodruff.

The journalist was reporting for ABC News in 2006 covering the war in Iraq when the vehicle he was riding in was hit by a roadside bomb. Woodruff credits military medical professionals with saving his life and now he’s made it his mission to give back.

“When he told me he was going to start this foundation to help guys with brain injuries, I was like that’s a good cause to help,” said Israel “DT” Del Toro.

The Air Force Master Sergeant was badly burned following an IED explosion in Afghanistan in 2005.

“I also see it as a way to give back to the guys who helped me and my family while I was in the hospital,” Del Toro said.

The event also honored other heroes, including Capt. Chesley “Sully” Sullenberger who famously landed a plane safely in the Hudson River after the aircraft’s engines failed due to a bird strike.

“Not only have we visited medical facilities for veterans we’ve visited many military bases and each time we meet the amazing young men and women who’ve chosen to serve in
wartime, we’re inspired,” said Sullenberger.

Sullenberger and wife Lorrie are big supporters of Stand Up for Heroes.

“We’re so excited to see the show tonight,” said Lorrie Sullenberger. “We’ve spent a lot of time at veterans hospitals and it takes your breath each time you go there, I’m really glad to be here tonight.”

The founder of Craigslist has been a long-time supporter of the Bob Woodruff Foundation. Craig Newmark has donated $1.9 million. He was honored as the 2018 “Generous Person” by the Foundation.

“I now have a pretty good understanding of what veterans and active service members and their families sacrifice in order to protect us,” said Newmark.

Now in its 12th year, Stand up for Heroes has raised more than $45 million to date.