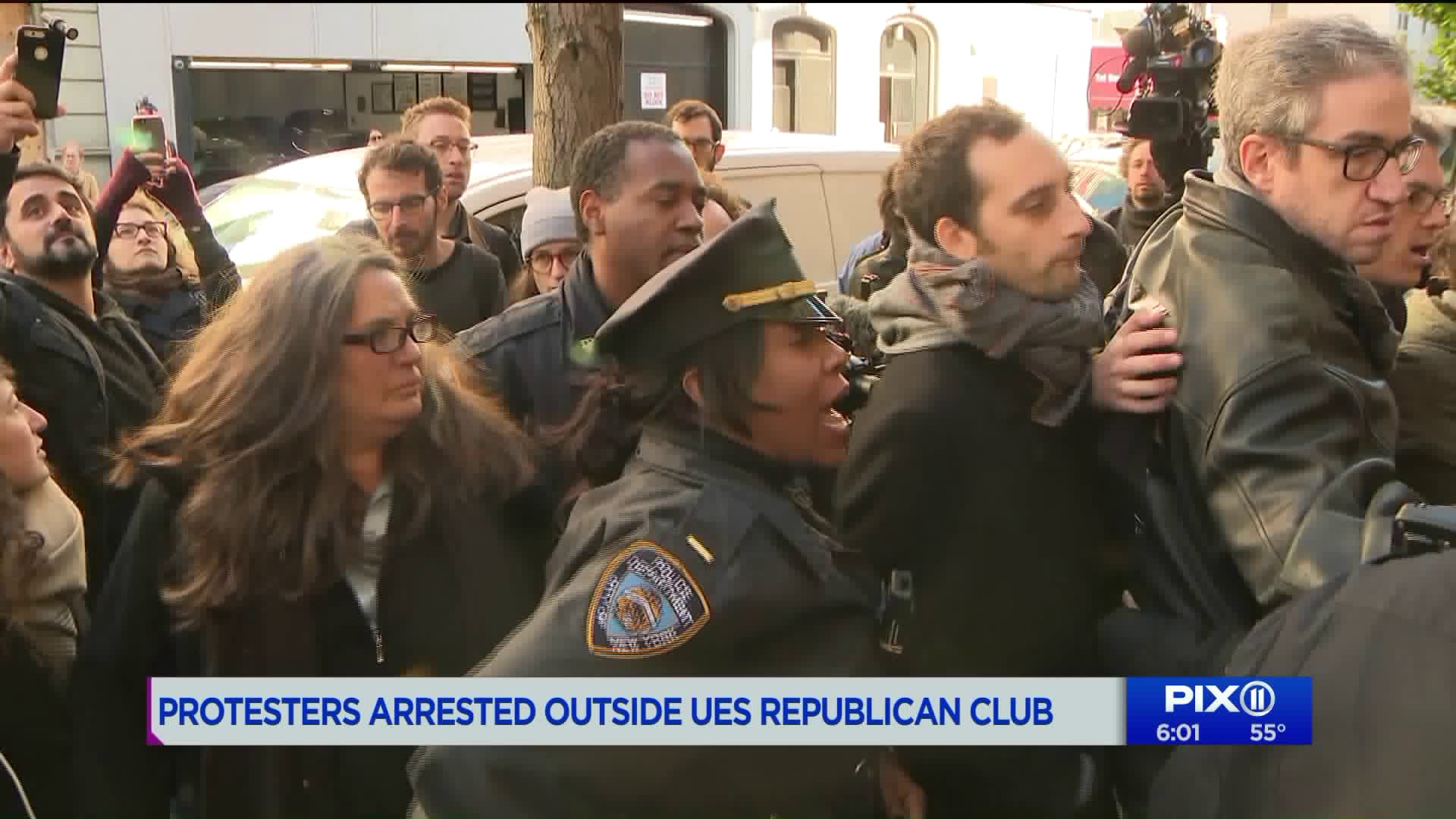 14 people among dozens of Jewish protesters were arrested for blocking the entrance to the Metropolitan Republican Club.In the wake of the Pittsburgh synagogue killings they wanted to highlight what they`re calling an environment of hate and white nationalism they believe the GOP is responsible for.

UPPER EAST SIDE, Manhattan -- Police said 14 people, among dozens of Jewish protesters, were arrested for blocking this the entrance to the Metropolitan Republican Club Tuesday afternoon.

The protesters said they did so because they wanted to highlight what they called an environment of hate and white nationalism tolerated by the GOP. They blame Republicans in part for the Pittsburgh synagogue shooting.

The club has been at the center of controversy recently for inviting Gavin McInnes to visit. He is the founder of the proud boys— a far right group that promotes political violence. A brawl broke out outside the club during the appearance, resulting in multiple arrests.

On Tuesday, the Jewish protesters demanded the GOP club’s leaders denounce white nationalism. They banged on the door and when they got no response they sat shiva for the 11 killed at the Pittsburgh synagogue. It is a Jewish mourning ritual.

The group laid 11 white stones and 11 yarmulkes with the names of the victims on a sign reading: “GOP tell white nationalists they don’t have a place in your party.”

Police eventually showed up and tried to escort one member of the club inside. However, the protesters refused to move— eventually sitting down locking arms.

PIX11 tried repeatedly to get a comment from people trying to get into the Metropolitan Republican Club. But they refused to comment.

About an hour after police arrived a final warning to disburse was given, and arrests were made without incident.

“I do feel heard,” said one protest organizer. “Our community as watching, and the world his watching. The world is watching United States embarrass itself when it refuses to condemn white nationalism.”

The Metropolitan Republican Club released a statement on Facebook:

Like most Americans, the Metropolitan Republican Club and its members were horrified and heartbroken by the recent shooting at the Tree of Life synagogue in Pittsburgh. Such violence and hate have no place in America, and we extend our deepest sympathies to the victims, their families, and the Pittsburgh community.

Manhattan's Upper East Side has a rich Jewish heritage, and the Metropolitan Republican Club is proud to play a role in that heritage. Many of our members are Jewish. We host the campaigns of many Jewish candidates running for office, our space is frequently used by local Jewish community organizations, and just last week we hosted a pro-Israel rally organized by U.S. Senate candidate Chele Farley.

Today we had some protesters outside the Club seeking to somehow implicate us and the Republican Party for the tragic events in Pittsburgh. Not only is such a suggestion completely ludicrous given the Club's membership and history, but also very sadly appears to be intentionally divisive at a time when the country should be rallying around our Jewish communities regardless of partisan affiliation. The protesters blocked the entrance to the Club, banged on the doors, and covered the outside walls and windows with posters. The NYPD reacted swiftly and several protesters were arrested without incident. We are once again incredibly thankful to the NYPD for their professionalism.