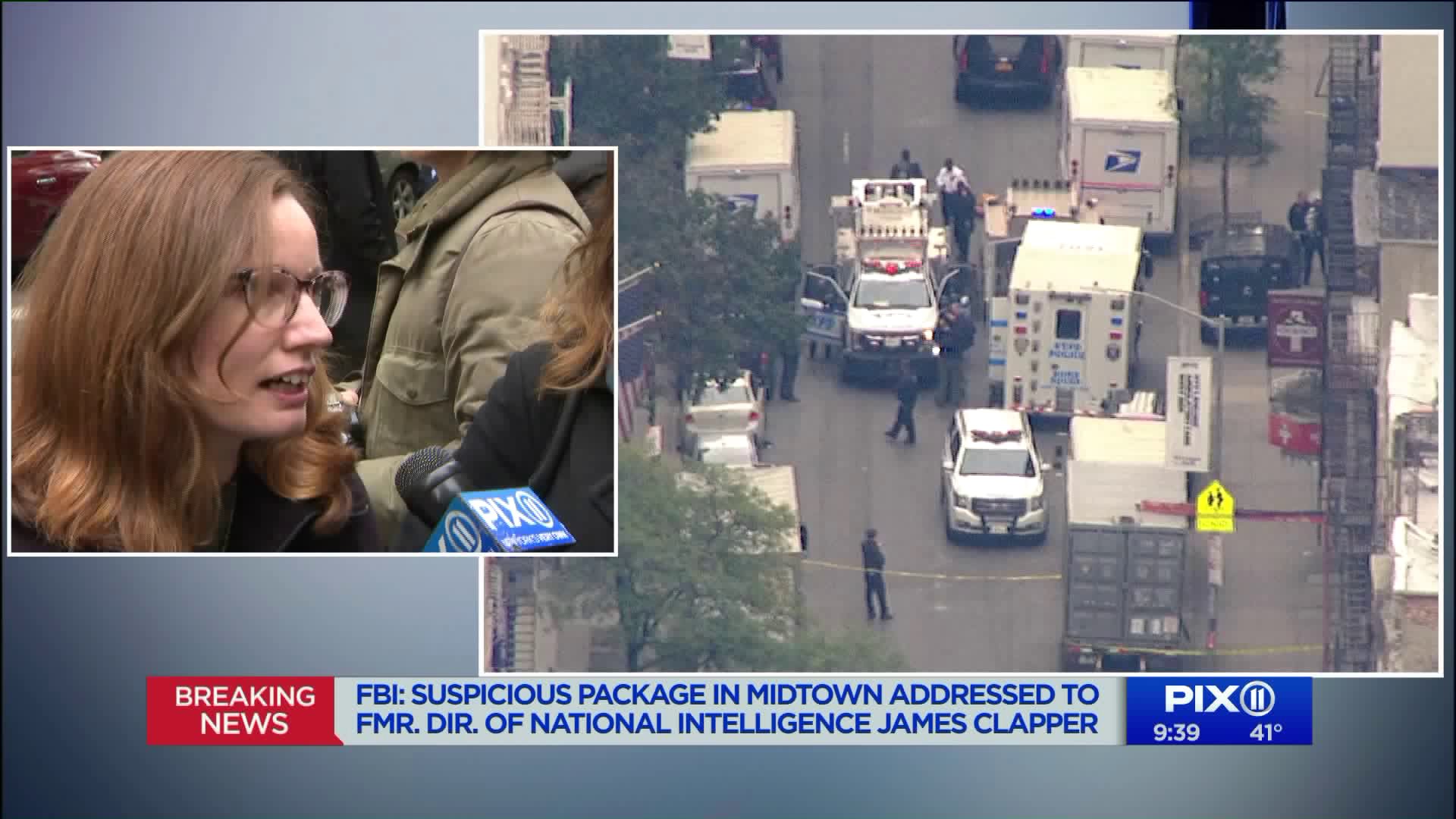 Another suspicious package is being investigated in Manhattan on Friday, after 10 packages were found across the country this week, including two in the borough, according to police. PIX11 spoke to two people who work in the area one remarked the situation is " just part of life in New York City now." 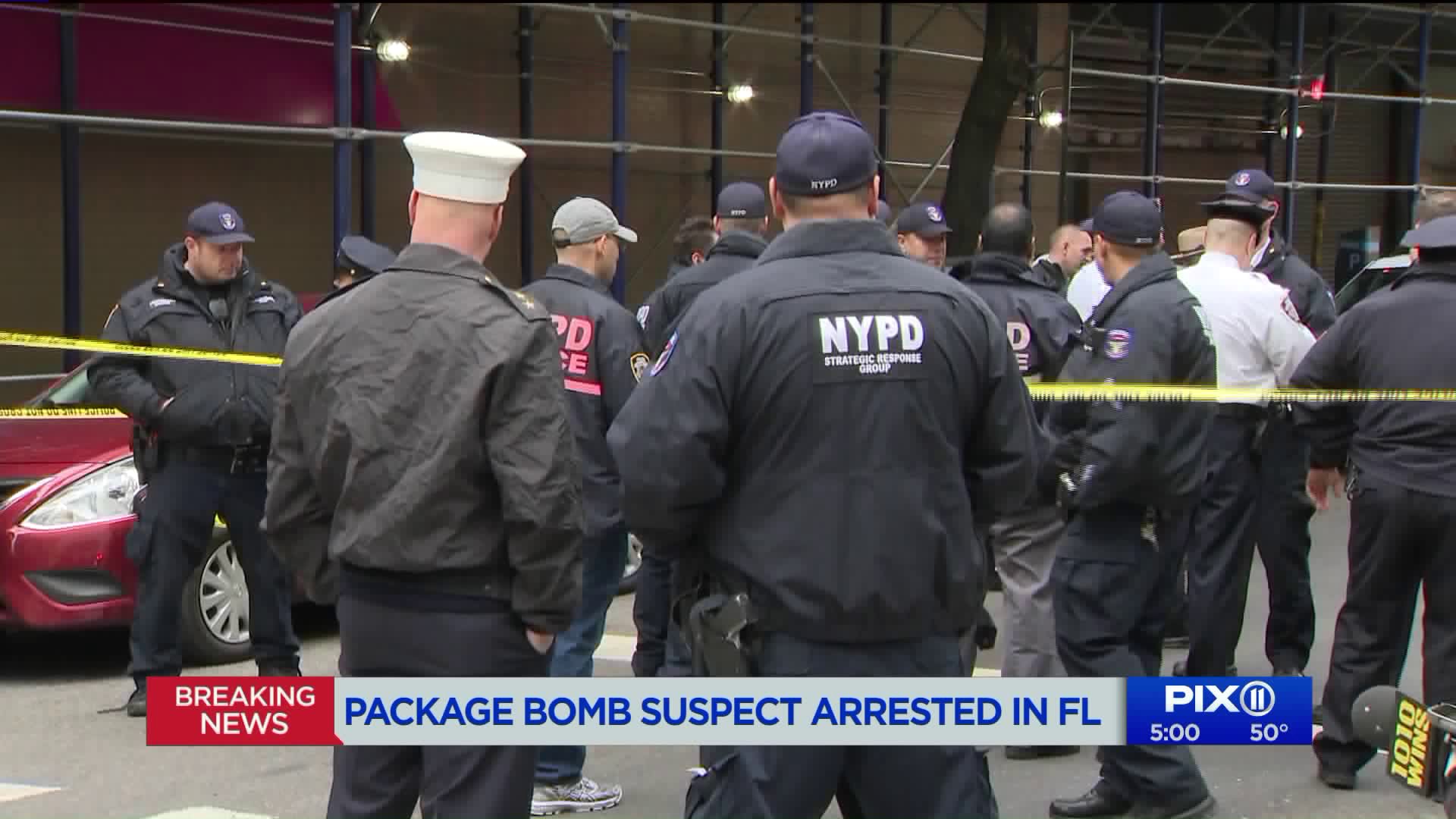 MANHATTAN — A person has been detained in connection to several packages containing explosives that were sent to top Democrats, CNN and others throughout the week nationwide, sources confirmed to PIX11 as authorities investigated more packages found Friday, this time in Manhattan, Florida and California.

FBI Director Christopher Wray said Friday investigators had fingerprints of Florida resident Cesar Sayoc and had possible DNA collected from two explosive devices. Wray says they matched a fingerprint found on one of the packages that had been sent to U.S. Rep. Maxine Waters of California.

It is not yet known if he is suspected of sending all of the packages.

Cesar Sayoc was detained at an auto parts store in Plantation, Florida, the Associated Press reports.

He has been charged with five crimes and faces 58 years in prison. He will be prosecuted in New York, where five of the 13 devices were found.

In midtown, a postal worker at a United States Postal Service on West 52nd Street spotted a package that looked like others found earlier this week that contained suspected bombs. Police confirm the package does look similar to the others.

The package was addressed to former Director of National Intelligence James Clapper and CNN, images of the package obtained by CNN show.

The investigation prompted several street closures until it was removed by 10:15 a.m., according to the NYPD. People in the area should expect heavy police presence and traffic delays. The package has been transported to a secured facility, police said.

Two women who work nearby said they were not surprised by the situation.

“I think it’s just part of life in New York City now. … We’ve just accepted it as life," one remarked.

A box leaning against a tree near Central Park West and 72nd Street Friday was also investigated but deemed safe, according to police. That incident was reported around 9:15 a.m.

A suspicious package addressed to Democratic Sen. Cory Booker of New Jersey was also found Friday, the AP reports. The package looks similar to others intercepted earlier this week.

Sen. Kamala Harris' office told the AP Friday that authorities in Sacramento, California are also investigating a suspicious package mailed to her.

The first of 10 suspicious packages was discovered Monday near the Bedford, New York home of billionaire philanthropist George Soros. That incident kicked off a chaotic week as similar packages were found in multiple states, targeting top Democrats like former President Barack Obama, as well as CNN and actor Robert De Niro.

Several incidents have occurred in Manhattan.

The package sent to CNN's New York City office and addressed to former CIA Director John Brennan, who appears on air on other broadcast and cable outlets, was intercepted Wednesday. It prompted an evacuation of the Time Warner Center.

Thursday morning, a suspicious package addressed to De Niro was found in Tribeca.

Officials investigate a suspicious package in Manhattan on Oct. 26, 2018. (AIR11)

Later on Thursday, the New York Time Warner building housing CNN was evacuated after a 911 call was made for a suspicious package, but after about an hour officials determined the two unattended packages were safe.

Officials have confirmed packages sent to Soros, CNN, the Clintons, Obama, Waters and Holder contained a small battery, were about six inches long and packed with powder and broken glass. Officials also said the devices were made from PVC pipe and covered with black tape.

Many of those arrested have previously drawn criticism from President Donald Trump.

After Sayoc's arrest was announced Friday, the president commended the work of investigators and said, "We must never allow political violence to take root in America ... I will do everything in my power as president to stop it."