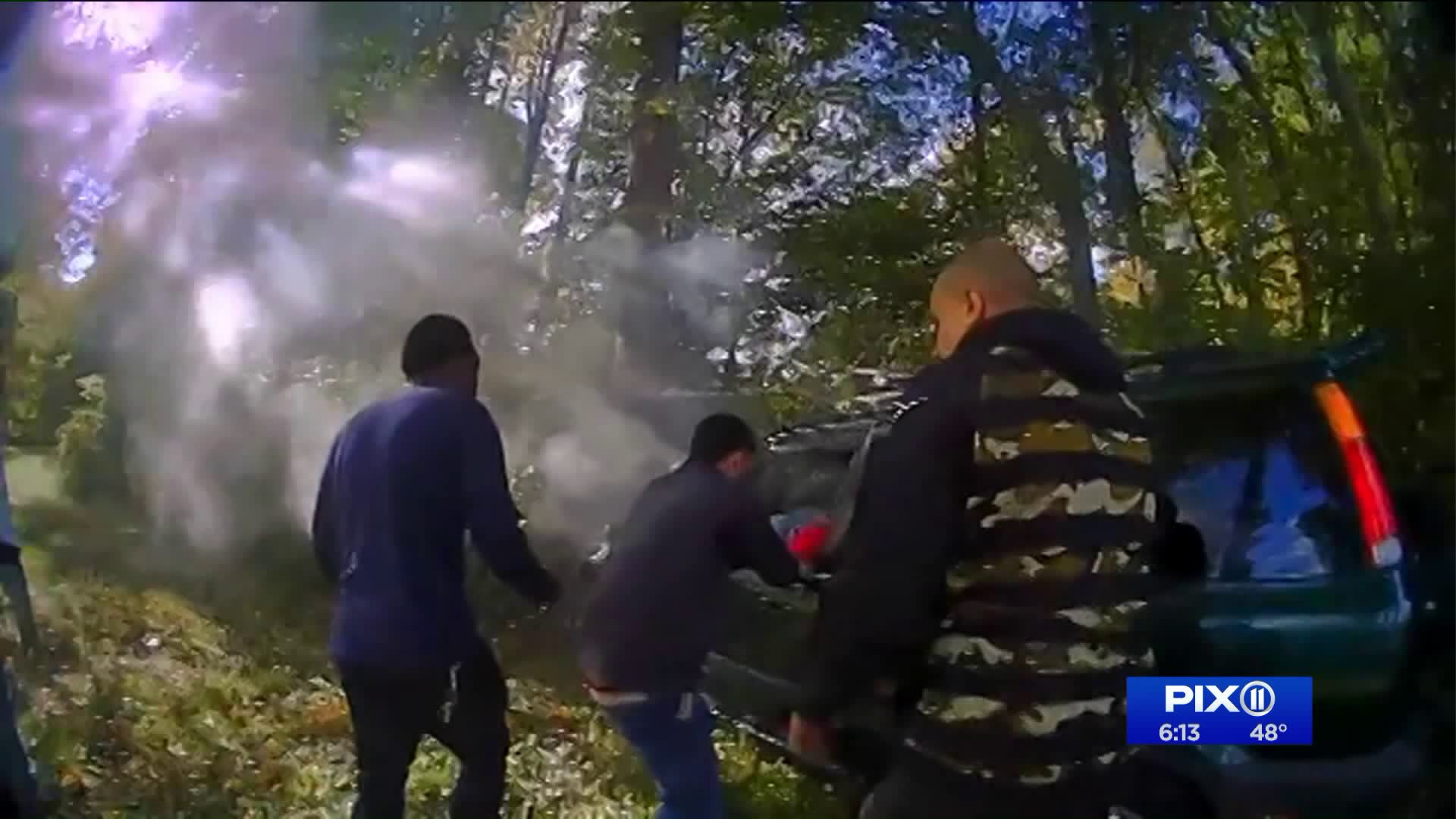 North Brunswick Police Officer Anthony Torres was on patrol on Route 130 when he noticed people pulling over and running toward the tree line, where smoke was billowing. He circled back and saw a car had crashed into a tree. Torres and a good Samaritan rescued the women in the flaming car.

NORTH BRUNSWICK, NJ — North Brunswick Police Officer Anthony Torres was on patrol on Route 130 Wednesday at around 3 p.m. when he noticed people pulling over and running toward the tree line, where smoke was billowing. He circled back and saw a car had crashed into a tree. He ran toward the car, but saw the driver was pinned down.

"As soon as I got there, I knew I was going to have to go back and cut the seat belt," said Officer Torres.

He pulled a knife from his cruiser and slashed the seat belt, but the car doors were stuck. A fire was now growing under the hood.

Officer Torres' body camera video showed the driver's airbags had gone off and she was in a daze. There was also one other passenger in the car who was alert.

"Can you come out?" Torres can be heard yelling to the women.

Flames started to come out of the front passenger side, Torres said.

"Come on get her out! Come on guys," a bystander can be heard yelling on the video.

Joshua Sandoval was in his backyard — feet away from the accident — when he heard the crash. Sandoval’s family and a neighbor had to evacuate their homes, in case the car exploded. But Sandoval ran towards the danger.

Sandoval grabbed onto the metal car door and helped bend it back with Officer Torres and other eyewitnesses.

"We just kept pulling, puling and pulling," Sandoval said. "I’m like come on, there is no excuse. At this point we have to get this open."

After the men bent the door back, the passenger was able to climb out. Officer Torres and another man dragged the driver out and away from the flames.

"They’re human beings," Sandoval said. "It’s not a matter of thinking about it. It’s a matter of getting the action done."

The cause of the accident is still unknown.

"I’m just glad it worked out okay, that we were able to remove her from the vehicle and get her to safety," said Officer Torres.

Moments after the rescue, the car erupted into flames. Both women are expected to recover.