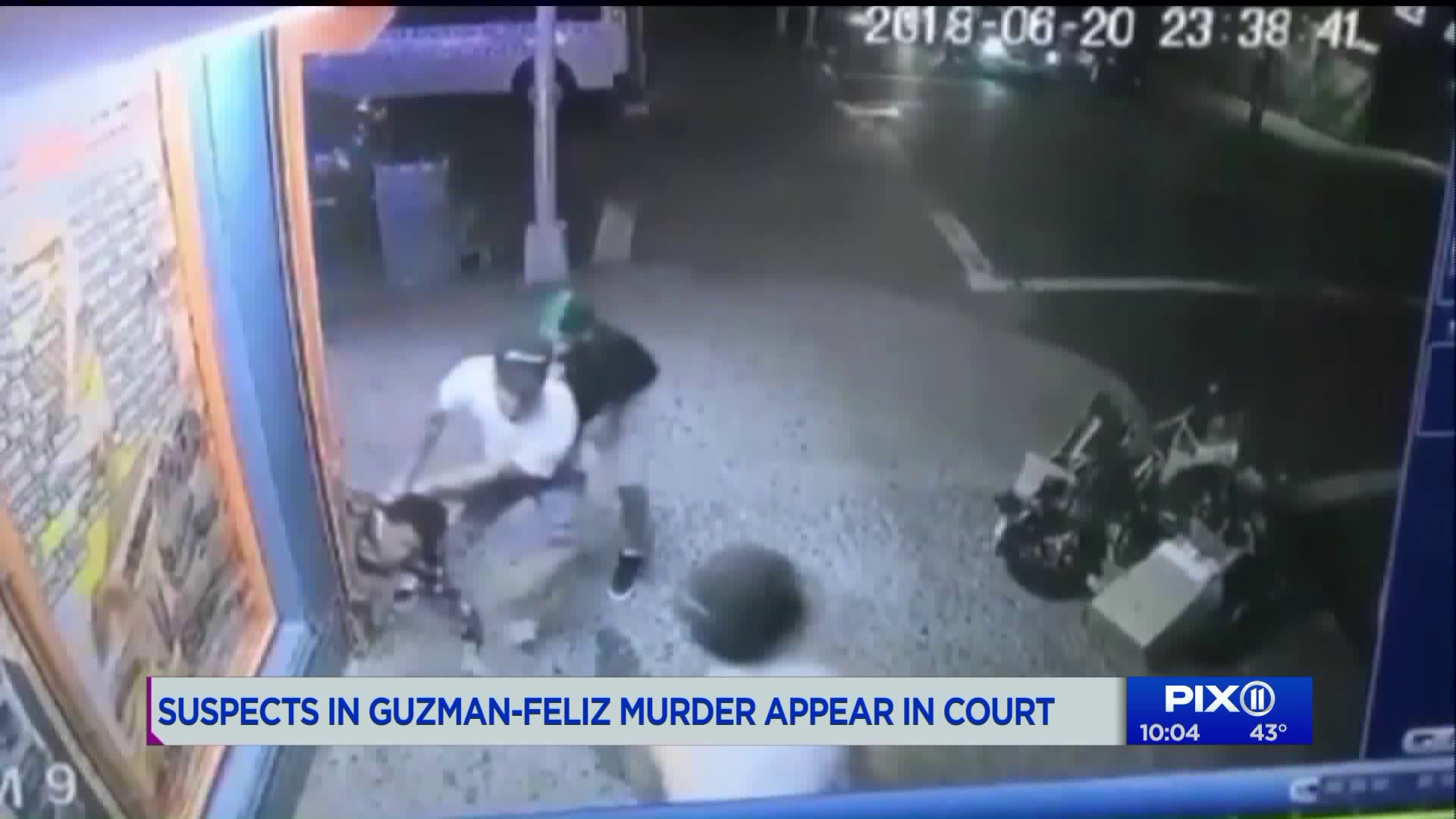 The mother of slain teen, Lesandro "Junior" Guzman-Feliz, yelled at one of her son`s accused killers as 10 of the 14 suspects appeared in court Thursday. The 15-year-old was killed by alleged gang members in an apparent case of mistaken identity on June 20. 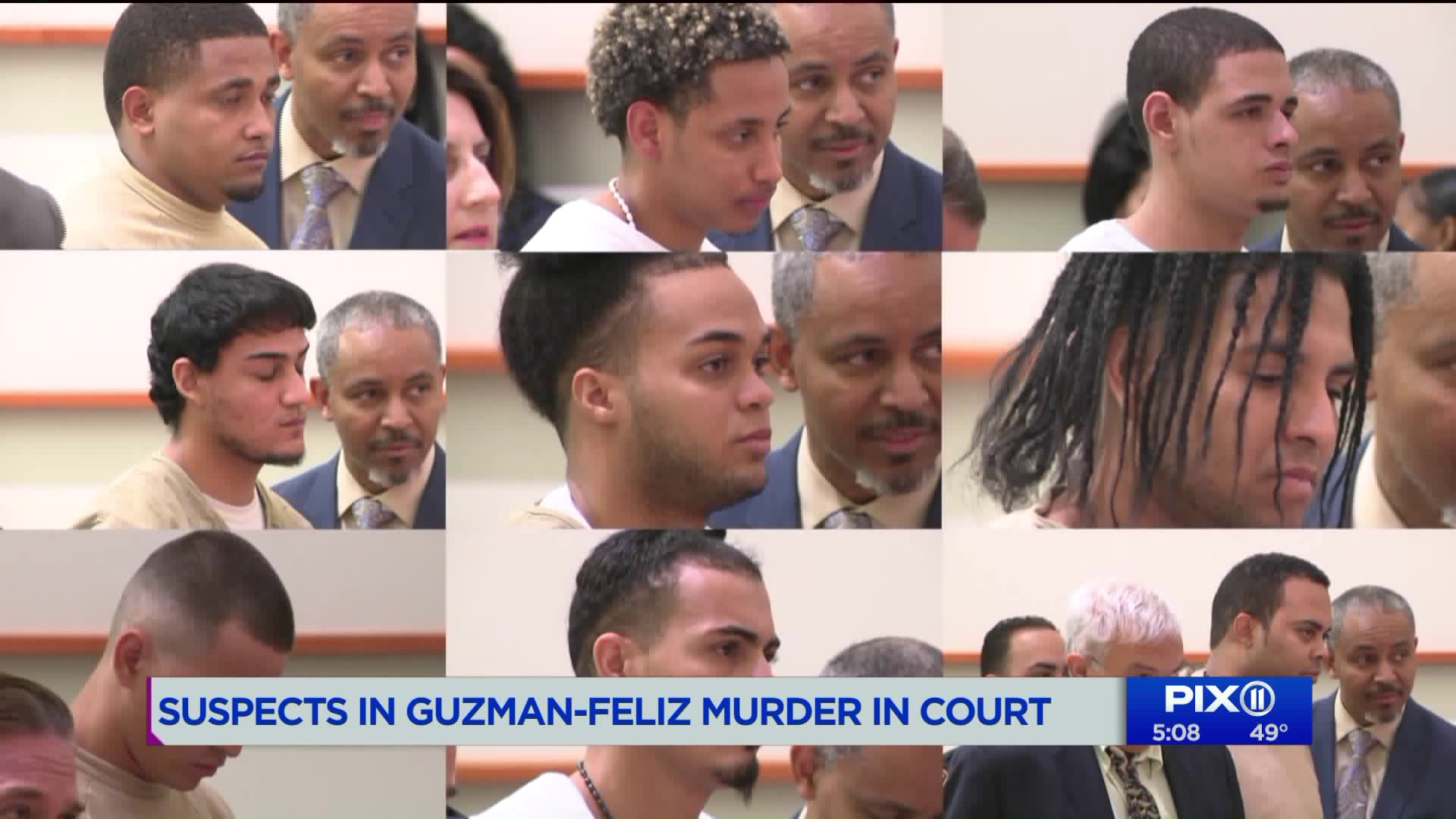 CONCOURSE, The Bronx -- The mother of slain teen, Lesandro "Junior" Guzman-Feliz, yelled at one of her son's accused killers as 10 of the 14 suspects appeared in court Thursday.

The 15-year-old was killed by alleged gang members in an apparent case of mistaken identity on June 20.

All of the men were required to have their trial statuses reviewed by a judge, and were told to expect to do an inner cheek swab in the next week in order to provide DNA for the case.

On hand for the all-day hearing were Junior's mother, Leandra Feliz, and father, Lisandro Guzman, and joining them were dozens of supporters -- so many that there was not nearly enough room to accommodate them in the largest courtroom here at criminal court.

"Justice for Junior," Leandra Feliz said, as she walked in to the courtroom, wearing a long-sleeve t-shirt emblazoned with biblical citations.

The most prominent one, on her back, over a portrait of her slain son, was Psalm 22. It's a passage that begins, "My God, why hast thou forsaken me?"

When suspect Kevin Alvarez was being led out of court, Feliz, Junior's mother, cried out, "Abusador!" in Spanish. The translation in English is "abuser." Court officers had to warn her about a judge's order to not raise voices in the courtroom.

She also had to be admonished by officers after she was seen gesturing toward suspect Joniaki Martinez Estrella. A variety of people in the courtroom told PIX11 News after the hearing that Feliz had raised the middle finger of one hand toward Estrella.

Supporters both in the courtroom and outside of court, on the street demonstrating, showed that they have not forsaken Junior's family or the memory of him. They called on the justice system to not forsake him either.

One other suspect, Jonaiki Martinez Estrella, was not allowed to be video recorded because his attorney failed to show up at court for the hearing.

Three other defendants -- Jose Tavares Rodriguez, Daniel Fernandez and Frederick Then -- were not present in court. All 14 defendants are being held at various Dept. of Corrections facilities until trial.

Meanwhile, outside of the courthouse, dozens of people carrying signs and bullhorns, and wearing shirts and large buttons bearing Junior's image demonstrated in support of the family. In fact, at various times during Thursday's hearing in court, the demonstrators could be heard chanting outside.

"What do we want? Justice!" they shouted. During the midday break from the hearing, Junior's parents joined them.

"Thank you so much," Feliz told the demonstrators, while Junior's father, Guzman, stood by her side. "Justice for my son," she said she and her family are pursuing, and added, "We pray for the justice."

Then, the protesters marched more than a mile from court to the bodega on Bathgate Avenue in the Belmont section, where Junior was killed.

While the demonstrators marched, Junior's parents stayed at court, heading back in to the courtroom after the lunch break to ensure that they saw every one of the men charged with killing their son. All 14 are charged with murder, and face a sentence of life in prison if found guilty.

All were ordered back to court on December 21, when details will be reviewed to prepare them for trial, which is set to begin in February.