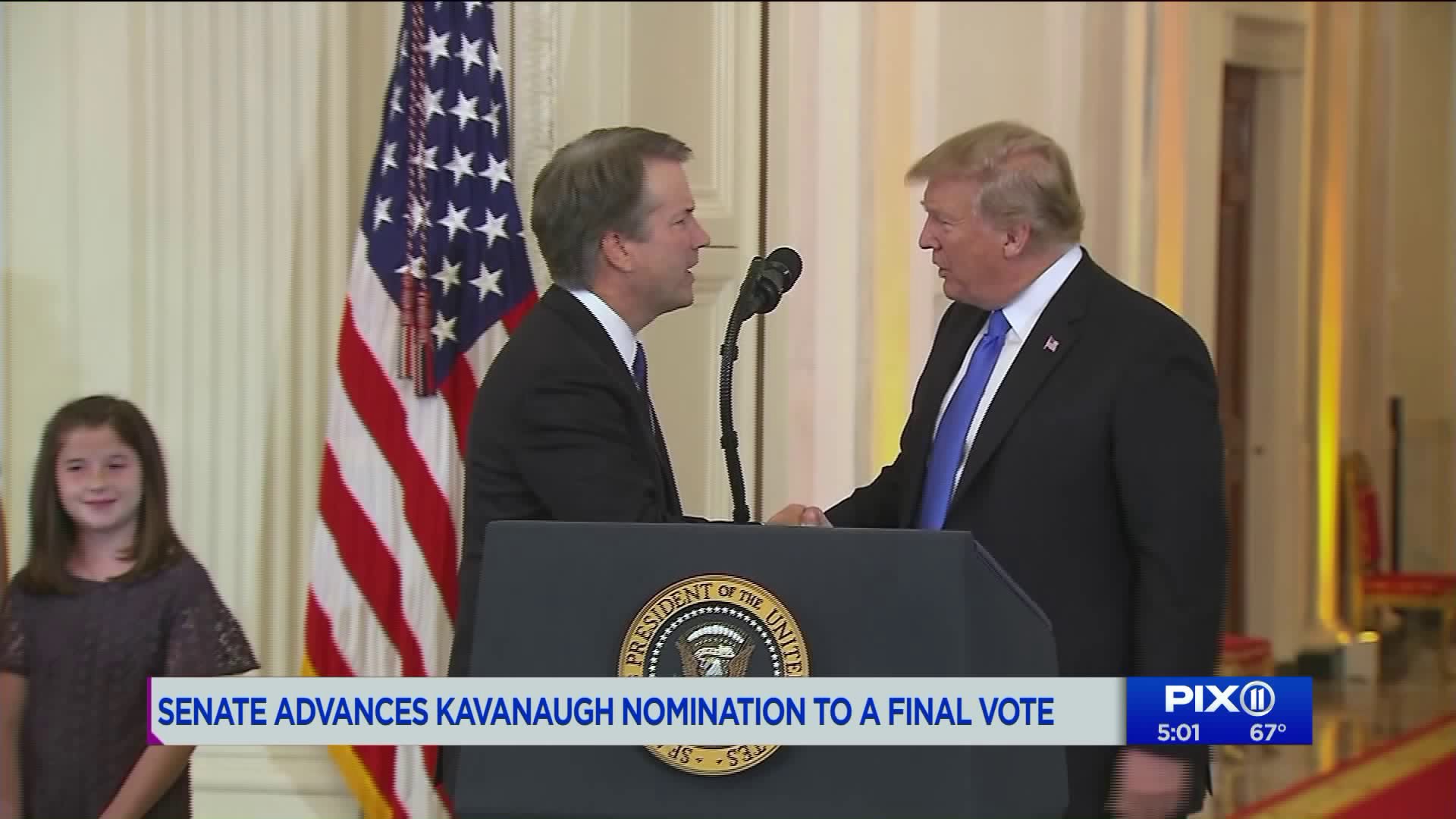 The Senate voted 51-49 to limit debate, effectively defeating Democratic efforts to scuttle the nomination with endless delays. With Republicans clinging to a two-vote majority, one Republican voted to stop the nomination, one Democrat to send it further.

Of the four lawmakers who had not revealed their decisions until Friday, Republican Sens. Susan Collins of Maine and Jeff Flake of Arizona voted yes, as did Democrat Joe Manchin of West Virginia. Republican Lisa Murkowski of Alaska voted not to send the nomination to the full Senate.

Lawmakers might vote differently on the climactic confirmation roll call, and Collins told reporters that she wouldn't rule out doing so. That left unclear whether Friday's tally signaled that the 53-year-old federal appellate judge was on his way to the nation's highest court. Confirmation would be a crowning achievement for Trump, his conservative base and Senate Majority Leader Mitch McConnell, R-Ky.

The vote occurred a day after the Senate received a roughly 50-page FBI report on the sexual assault allegations, which Trump ordered only after wavering GOP senators forced him to do so.

Republicans said the secret document — which described interviews agents conducted with 10 witnesses — failed to find anyone who could corroborate allegations by his two chief accusers, Christine Blasey Ford and Deborah Ramirez. Democrats belittled the bureau's findings, saying agents constrained by the

White House hadn't reached out to numerous other people with potentially important information.

The vote also occurred against a backdrop of smoldering resentment by partisans on both sides. That fury was reflected openly by thousands of boisterous anti-Kavanaugh demonstrators who bounced around the Capitol complex for days, confronting senators in office buildings and even reportedly near their homes.

On the Senate floor, lawmakers' comments underscored the lingering bitterness.

"What left wing groups and their Democratic allies have done to Judge Kavanaugh is nothing short of monstrous," Senate Judiciary Committee Chairman Chuck Grassley, R-Iowa, said on the chamber's floor before the vote. He accused Democrats of using destructive, unwarranted personal attacks on the nominee and even encouraging the protesters, saying, "They have encouraged mob rule."

Dianne Feinstein of California, that committee's top Democrat, said Kavanaugh's testimony at last week's dramatic Judiciary panel hearing should "worry us all," citing "a hostility and belligerence that is unbecoming" of a Supreme Court nominee.

When Trump nominated Kavanaugh in July, Democrats leapt to oppose him, saying that past statements and opinions showed he'd be a threat to the Roe v. Wade case that assured the right to abortion. They said he also seemed ready to knock down President Barack Obama's health care law and to rule for Trump if federal authorities probing his 2016 campaign's connections to Russia initiate legal action.

But that evolved into a late-summer spectacle after Ford accused Kavanaugh of trying to rape her at an alcohol-infused high school gathering in 1982, when both were teenagers. Two other women also emerged and accused him of other incidents of sexual misconduct. Kavanaugh has denied all the charges.

Under pressure from wavering Republicans, GOP leaders agreed to an extraordinary Senate Judiciary Committee hearing last week that mesmerized the nation as Ford nervously recounted her story and said she was "100 percent" certain that Kavanaugh was her attacker.

A fuming Kavanaugh strode into the same packed hearing room that afternoon and said he, too, was "100 percent" certain the incident had not occurred. He angrily accused Democrats of a "search and destroy" mission, fueled by their hatred of Trump.