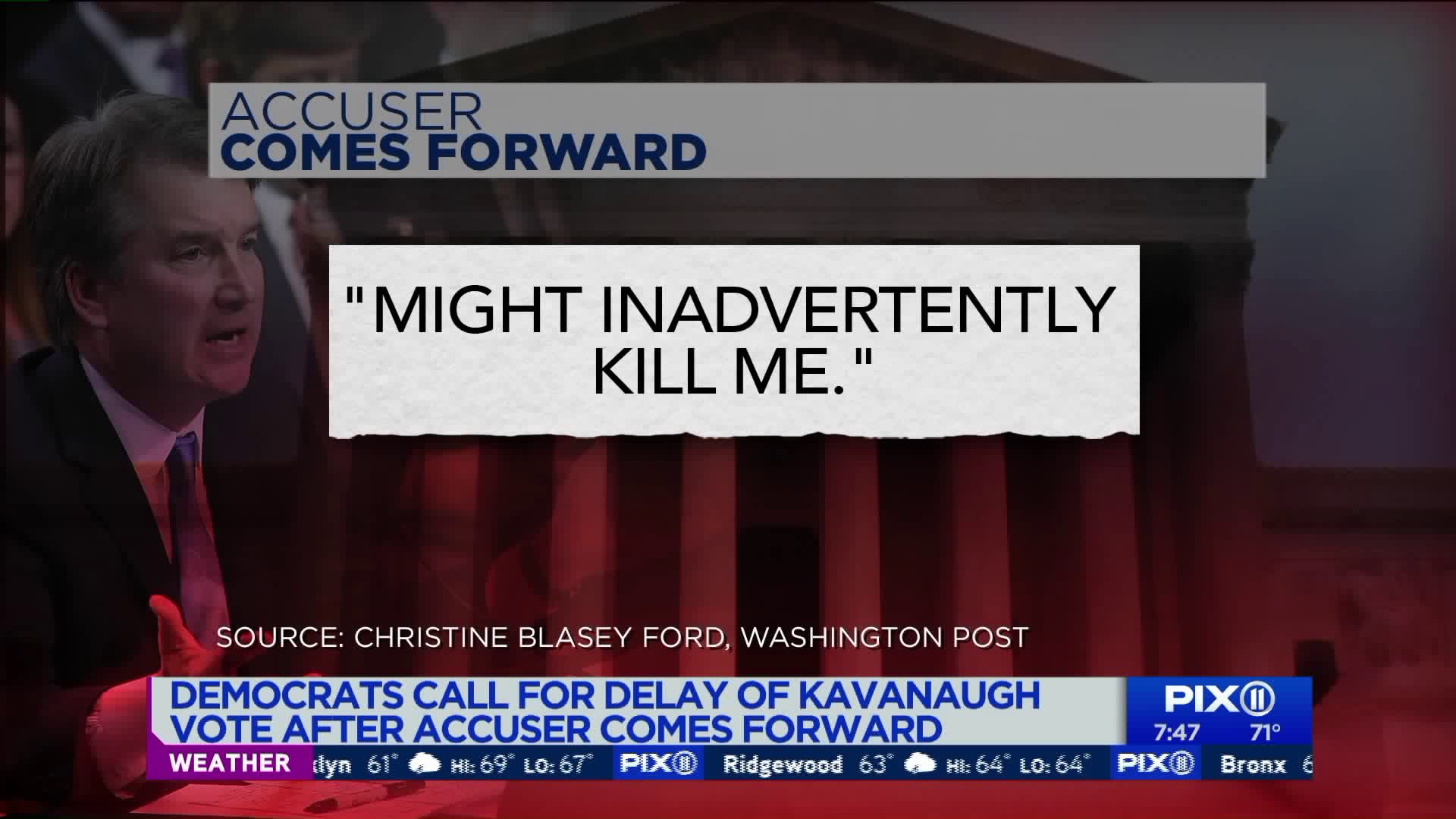 Judge Brett Kavanaugh`s confirmation for the Supreme Court is taking an uncertain turn as Republican senators express concern over a woman`s private-turned-public allegation that a drunken Kavanaugh groped her and tried to take off her clothes at a party when they were teenagers.

WASHINGTON — Judge Brett Kavanaugh's confirmation for the Supreme Court is taking an uncertain turn as Republican senators express concern over a woman's private-turned-public allegation that a drunken Kavanaugh groped her and tried to take off her clothes at a party when they were teenagers.

The White House and other Kavanaugh supporters had dismissed the allegation of sexual misconduct when it was initially conveyed in a private letter. With a name and disturbing details, the accusation raised the prospect of congressional Republicans defending President Donald Trump's nominee ahead of midterm elections featuring an unprecedented number of female candidates and informed in part by the #MeToo movement.

The GOP-controlled Senate Judiciary Committee appeared nonetheless committed to a vote later this week despite Christine Blasey Ford's account in The Washington Post. Kavanaugh, she said, pinned her to a bed at a Maryland party in the early 1980s, clumsily tried to remove her clothing and put his hand over her mouth when she tried to scream. Kavanaugh repeated his previous denial that such an incident ever took place.

A split seemed to be emerging among the GOP.

As Democrats, led by Minority Leader Chuck Schumer of New York, called for a delay in the vote, two committee Republicans — all 11 on the GOP side are men — Sens. Jeff Flake of Arizona and Lindsey Graham of South Carolina, said they wanted to hear more from Ford. Flake went as far as to say he was "not comfortable" voting for Kavanaugh for the time being. A potential "no" vote from Flake would complicate the judge's prospects. A Republican not on the committee, Sen. Bob Corker of Tennessee, said the vote should be postponed until the committee heard from Ford. Contacted Sunday by CNN, Sen. Susan Collins, R-Maine, wouldn't say if the vote should be postponed.

Some Senate Republicans, along with the White House, see no need to postpone voting over what they consider uncorroborated and unverifiable accusations, according to a person familiar with the situation but not authorized to speak publicly.

A committee spokesman said late Sunday that its chairman, Sen. Chuck Grassley of Iowa, was trying to arrange separate, follow-up calls with Kavanaugh and Ford, but just for aides to Grassley and Sen. Dianne Feinstein, D-Calif., before Thursday's scheduled vote. Critics have already accused the GOP of fast-tracking the process to get Kavanaugh on the court by Oct. 1, the first day of the fall term.

The allegation against Kavanaugh first came to light late last week in the form of a letter that had been for some time in the possession of Feinstein, the top Democrat on the Judiciary Committee and one of its four female members. On Sunday, The Washington Post published an interview with Ford, who after months of soul-searching decided to go public.

"I thought he might inadvertently kill me," said Ford, 51, a clinical psychology professor at Palo Alto University in California. "He was trying to attack me and remove my clothing." She told the Post that she was able to escape after a friend of Kavanaugh's who was in the room jumped on top of them and everyone tumbled.

Through the White House, Kavanaugh, 53, a federal appeals judge in Washington, said Sunday: "I categorically and unequivocally deny this allegation. I did not do this back in high school or at any time."

Then on Monday, the White House released the following statement from Kavanaugh:

This is a completely false allegation. I have never done anything like what the accuser describes—to her or to anyone. Because this never happened, I had no idea who was making this accusation until she identified herself yesterday. I am willing to talk to the Senate Judiciary Committee in any way the Committee deems appropriate to refute this false allegation, from 36 years ago, and defend my integrity.

Senate Republicans, along with the White House, see no need to postpone voting over what they consider uncorroborated and unverifiable accusations, according to a person familiar with the situation but not authorized to speak publicly.

In considering their options Sunday, Republicans largely settled on the view that Ford's story alone was not enough to delay Kavanaugh's confirmation.

Grassley could invite Ford to testify, likely in closed session before Thursday. Kavanaugh would also probably be asked to appear before senators. The panel would also likely seek testimony from Mark Judge, Kavanaugh's friend and classmate who Ford says jumped on top of her and Kavanaugh. Judge has denied that the incident happened.

Republicans have not settled on the strategy, the person familiar with the situation said, but were weighing options, including doing nothing.
Republicans say the allegations have already cast a shadow over Kavanaugh but that it does not appear to be enough to change the votes in the narrowly divided 51-49 Senate. Key will be the views of Collins and Sen. Lisa Murkowski of Alaska.

The White House has accused Feinstein of mounting an "11th hour attempt to delay his confirmation." The White House has also sought to cast doubt about Ford's allegation by noting that the FBI has repeatedly investigated Kavanaugh since the 1990s for highly sensitive positions he has held, including in the office of independent counsel Ken Starr, at the White House and his current post on the federal appeals court in Washington.

Kavanaugh's nomination had already sharply divided the Senate along party lines. But the allegations of sexual misconduct, particularly coming amid the #MeToo movement against sexual harassment, coupled with Ford's emergence could complicate matters, especially as key Republican senators, including Collins and Murkowski, are under enormous pressure from outside groups who want them to oppose Kavanaugh on grounds that as a justice he could vote to undercut the Roe v. Wade ruling legalizing abortion in the U.S.

Ford told the Post that Kavanaugh and a friend — both "stumbling drunk," she says — corralled her in a bedroom when she was around 15 and Kavanaugh was around 17. She says Kavanaugh groped her over her clothes, grinded his body against hers and tried to take off her one-piece swimsuit and the outfit she wore over it. Kavanaugh covered her mouth with his hand when she tried to scream, she says, and escaped when Judge jumped on them.

Kavanaugh attended a private school for boys in Maryland while Ford attended a nearby school.

In the interview, Ford says she never revealed what had happened to her until 2012, when she and her husband sought couples therapy. Ford's husband, Russell Ford, said he recalled his wife using Kavanaugh's last name and expressing concern that Kavanaugh — then a federal judge — might someday be nominated to the Supreme Court.

Sixty-five women who knew Kavanagh in high school defended him in a separate letter, circulated by Senate Judiciary Committee Republicans, as someone who "always treated women with decency and respect."