Trump claims, without citing evidence, that 3,000 ‘did not die’ in Puerto Rico 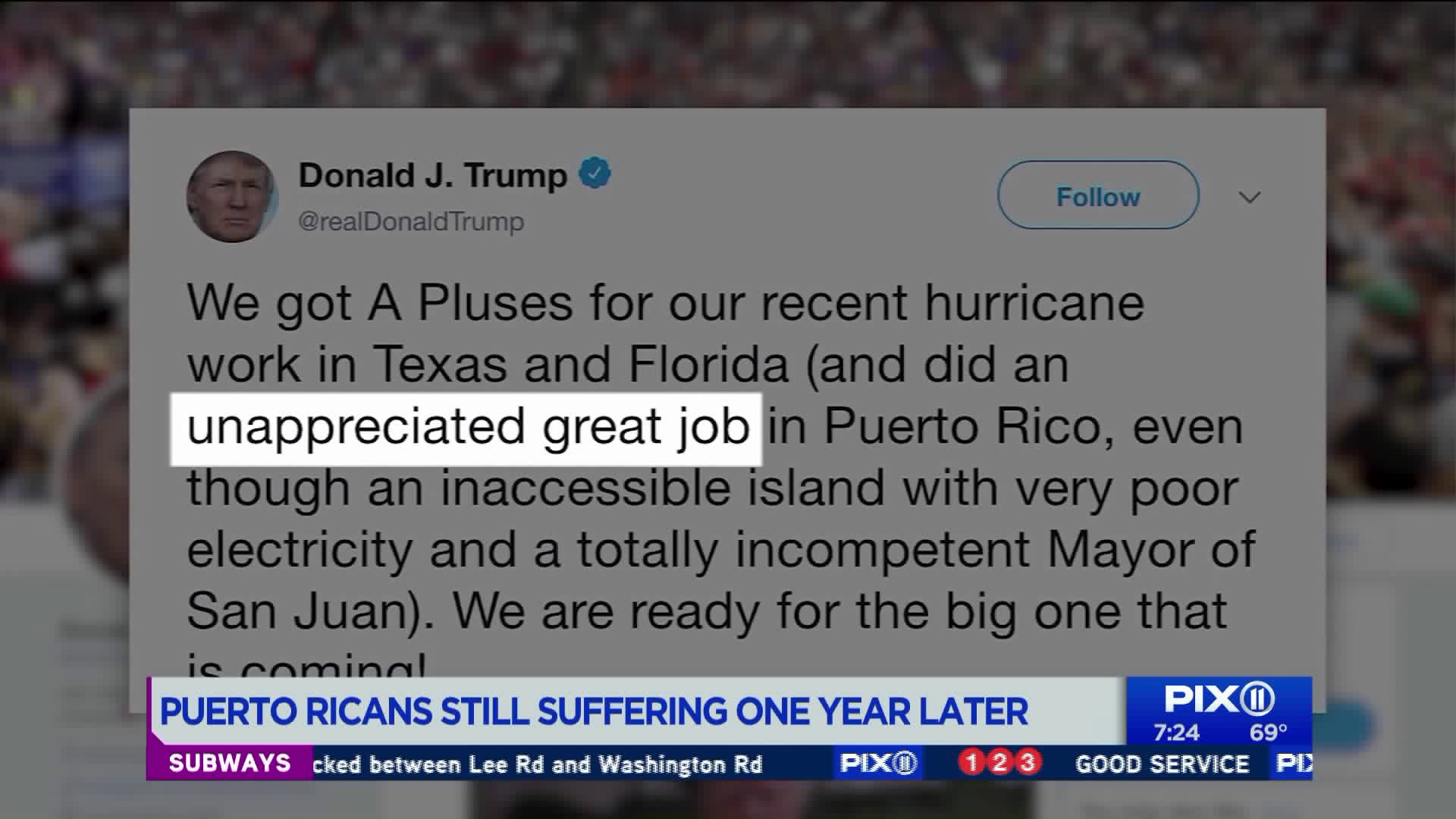 President Donald Trump`s assertion that the federal government`s response to Hurricane Maria was "an incredible, unsung success" fell flat in Puerto Rico, where islanders are still struggling to recover from the devastating storm a year later and reports have emerged that millions of supplies went undelivered and the storm is to blame for nearly 3,000 deaths. 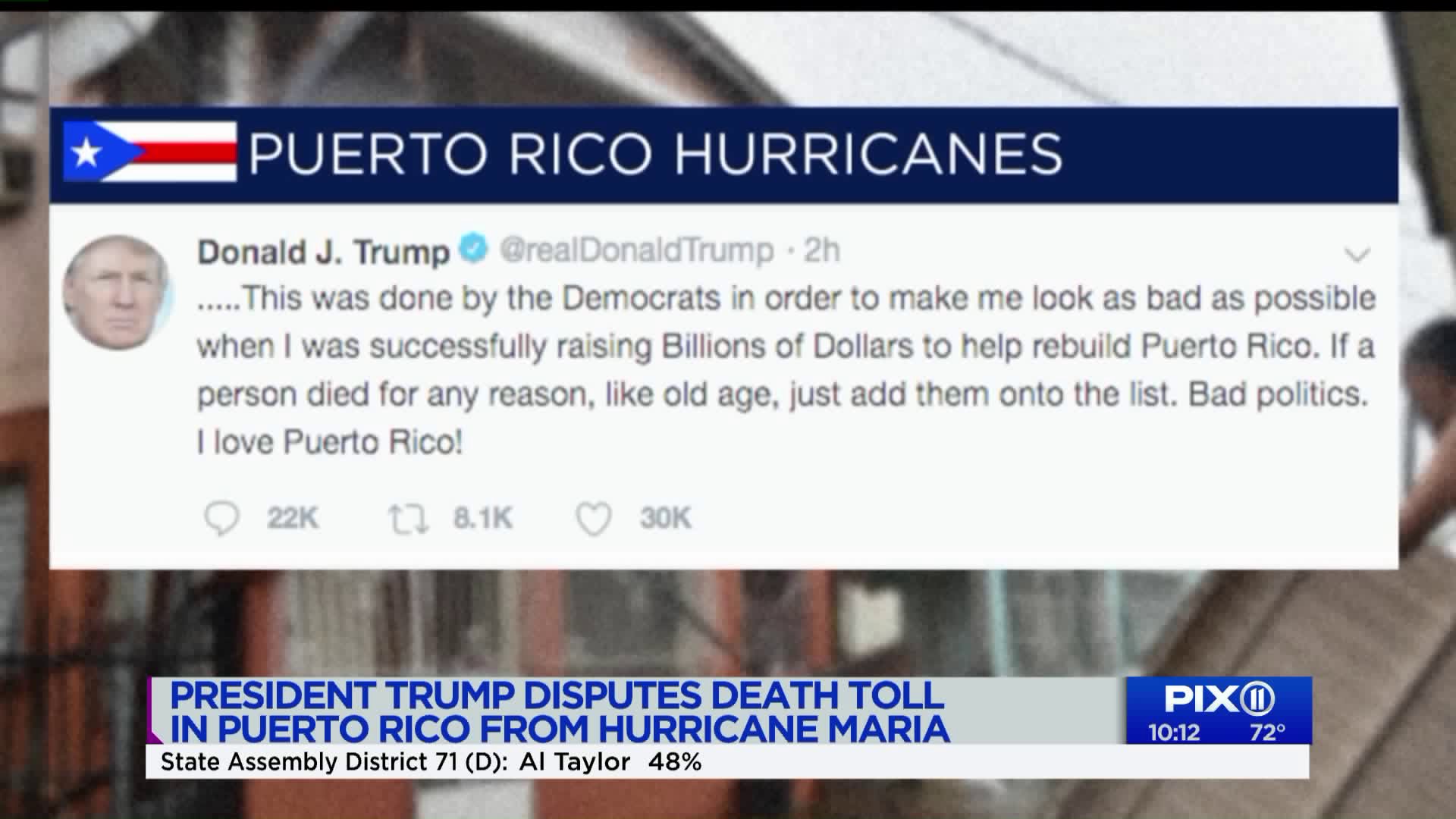 WASHINGTON — President Donald Trump is rejecting the widely accepted death toll in Puerto Rico from Hurricane Maria, claiming without citing evidence that "3,000 people did not die." Trump called the count a move by Democrats to make him look bad.

Trump tweeted Thursday as Hurricane Florence bears down on the Carolinas. He said: "When I left the Island, AFTER the storm had hit, they had anywhere from 6 to 18 deaths. As time went by it did not go up by much. Then, a long time later, they started to report really large numbers, like 3000..."

3000 people did not die in the two hurricanes that hit Puerto Rico. When I left the Island, AFTER the storm had hit, they had anywhere from 6 to 18 deaths. As time went by it did not go up by much. Then, a long time later, they started to report really large numbers, like 3000...

.....This was done by the Democrats in order to make me look as bad as possible when I was successfully raising Billions of Dollars to help rebuild Puerto Rico. If a person died for any reason, like old age, just add them onto the list. Bad politics. I love Puerto Rico!

Puerto Rico's governor raised the U.S. territory's official death toll from Hurricane Maria from 64 to 2,975 after an independent study found the number of people who succumbed in the aftermath had been severely undercounted.

Trump tweeted the denial after claiming the federal government's response to Hurricane Maria was "an incredible, unsung success."

San Juan Mayor Carmen Yulin Cruz criticized Trump in a series of tweets, including one that said, "If he thinks the death of 3,000 people (is) a success God help us all."

That reignited a longstanding feud between the mayor and Trump, who fired back calling her "totally incompetent" and saying the U.S. government "did an unappreciated great job in Puerto Rico."

A July report by the Federal Emergency Management Agency, or FEMA, noted several shortcomings in its response, including that it underestimated how much food and water would be needed after the storm and that not enough Spanish-speaking aid workers were deployed to the island.

At the same time, the agency also faced challenges that were arguably beyond its control such as the sheer force of the monster storm and the logistical difficulties of reaching the Caribbean island over a thousand miles away from the mainland.

And many residents say local officials share much of the blame. Puerto Rico's government has acknowledged that its emergency plans were designed for a Category 1 hurricane, as well as failures to follow those plans and communications breakdowns.

Ramon Ruiz, a 56-year-old business owner whose father died from heart problems on Thanksgiving after riding out the hurricane alone at home, pressed up against the door to keep it from caving in, is among those who say both local and federal authorities were slow to act.

"If it wasn't for the churches and private organizations, we truly would not have received help from anyone," Ruiz said. "They are treating us like second-class citizens. ... If we were another state, the response would have been much faster."

In Maria's aftermath, according to FEMA data analyzed by the AP, approvals for individual assistance checks in Puerto Rico were slower compared with what happened with large storms last year. From Sept. 30 to Oct. 7, not one of those checks was approved. On Oct. 8 the approvals began rolling again, but with a large spike suggesting a backlog.

In addition, data from the U.S. Small Business Administration indicate that approvals for disaster loans in Puerto Rico were slow — the first one was not approved until 15 days after the storm was declared, four times as long as with Hurricane Harvey.

For Maria, there was a large gap between when the first loan was approved and when loans started ramping up. While 25 percent of Harvey loans were OKed within 42 days, for Maria, that didn't happen until Jan. 9, more than three months after the storm hit.

Stacks upon stacks of bottled water sit near a runway in Ceiba, Puerto Rico, on Sept. 12, 2018.

Islanders have also been angered by recent discoveries of supplies that never got delivered. A photo that emerged Tuesday of thousands of water bottles abandoned on a runway in eastern Puerto Rico prompted local officials to say Wednesday that they were opening an investigation.

Ottmar Chavez, the new secretary of the island's General Services Administration, said at a news conference that Puerto Rican officials requested the water from the U.S. government and were supposed to pick it up in late May. He said some of it was distributed but people complained that it smelled bad. He added that it was unclear why the remainder sat on the runway for nearly four months.

Shortly after Maria hit last year, Trump visited Puerto Rico and was widely criticized for tossing paper towels to storm victims in a manner seen by many as insensitive to the scope of the disaster.

His latest remarks once again dredged up those same hurt feelings.

"I ignore them because none of them make sense," said Michelle Cruz, a 48-year-old airline worker whose mother died in December from septicemia after contracting an infection in a hospital during surgery after Maria. "It bothers me and it hurts. But I don't pay attention to him."