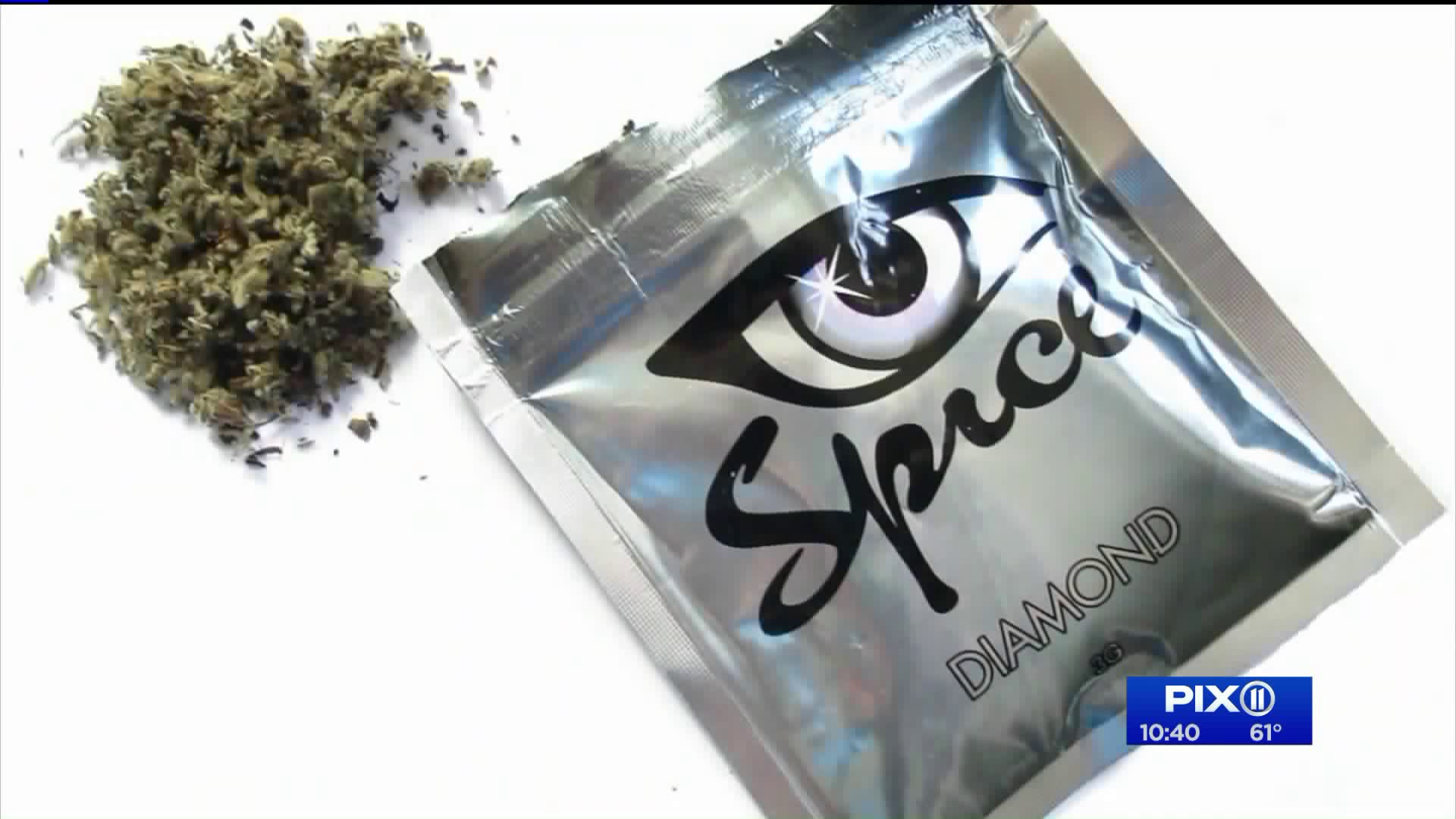 The corner of Broadway and Myrtle Avenue has been the scene of mass overdoses at least twice in the last two years. Over the past weekend, five more people overdosed near the intersection. It is clearly a problem. However, the local council member said, five overdoses is an improvement. 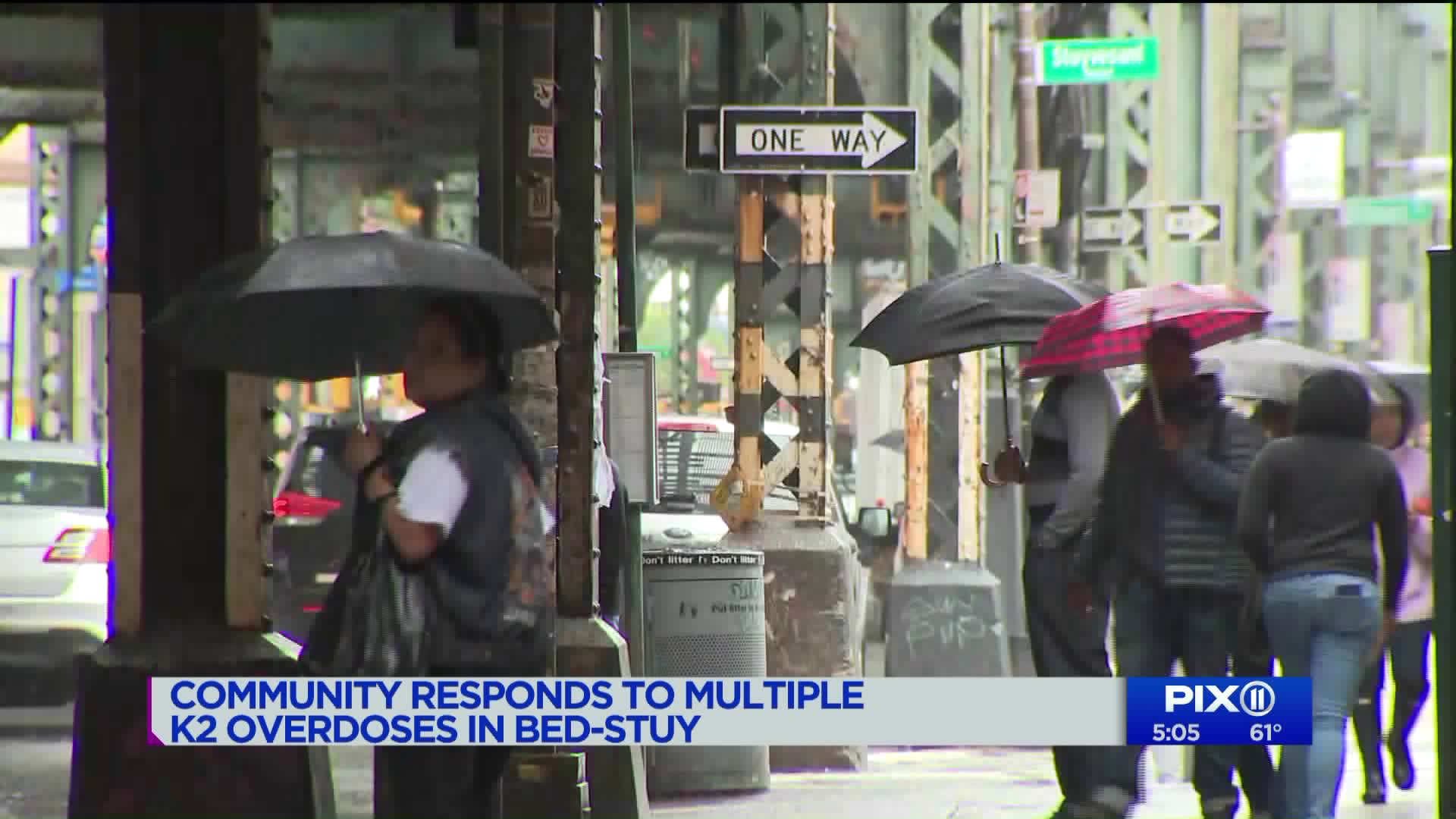 BEDFORD-STUYVESANT, Brooklyn — It's a crisis that's left thousands of New Yorkers on the brink of death in the past couple of years, and now it's happened again.

Mass overdoses of the synthetic marijuana called K2 continue in New York City, and one intersection, on the border of Bed-Stuy and Bushwick, has been hit particularly hard.

The corner of Broadway and Myrtle Avenue has been the scene of mass overdoses at least twice in the last two years. Over the past weekend, five more people overdosed near the intersection. It is clearly a problem. However, the local council member said, five overdoses is an improvement.

"Because of the coordination" of law enforcement and the community, Councilmember Robert Cornegy said, "the numbers [of overdoses] are down."

Neighbors who spoke with PIX11 agree. It's still a worry, but it's becoming less prevalent.

"I live a block away" from the problem intersection, said resident Rosemond Daniel. She said that she'd seen a greater presence of police for quite some time, and that, compared to the last couple of years, "I have not been seeing many overdoses."

Some statistics from city authorities bear that out. The NYPD reported a mass overdose in July 2016, in which 33 people had to be treated at or near the Myrtle Avenue and Broadway intersection. By contrast, in an incident in May of this year, 14 people overdosed at around the same time.

This past Saturday, there were five overdoses near the intersection. It is a reduction in a problem that persists. Still, said Cornegy, "We will be back out here [holding yet another news conference], without behavioral health services, mental health services" and other services designed to help people overcome their addictions to synthetic marijuana and other drugs.

Some other residents were skeptical, however.

"I feel like it's never going to stop," said Ricleiry Perez. "It's ongoing," she continued, doubtful that increased assistance, including the creation of more jobs in the community, was going to help.

"It's an addiction," she said. "Just because you've got a job, doesn't mean you're going to stop."

Cody St. Jean, her friend, who also lives in the neighborhood, said that more concentration needs to be made on the source of the K2 in the area. "They get it from somewhere," he said. "They've got to investigate more, to figure where do they get it from."

According to Cornegy, bodegas in the area that had been selling K2 have either been shut down or forced to stop selling the synthetic cannabinoid -- which is usually made up of chopped up, dried leaves, sprayed with perception-altering chemicals and sold in appealing packages with catchy names.

The councilmember said that the cessation of store sales, along with police patrolling more heavily, but focusing on street-level sellers, rather than buyers, had helped. Still, he said, more resources have to be brought to the community. He said that he would increase pressure on the city government, as well as the state legislature and Congress to devote more funding to services in the Bed-Stuy and Bushwick communities.

Currently, the local member of Congress, Nydia Velasquez, in conjunction with Cornegy and other local officials, has introduced a bill called the Synthetic Drug Prevention and Treatment Act, which would direct more federal funding to preventing purchases of synthetic drugs like K2. It has yet to pass the House of Representatives.

Cornegy also said, in an afternoon news conference, that there is a new police strategy as well. He said he was not at liberty to divulge details of the plan, but he said he supported it and was convinced of its effectiveness.