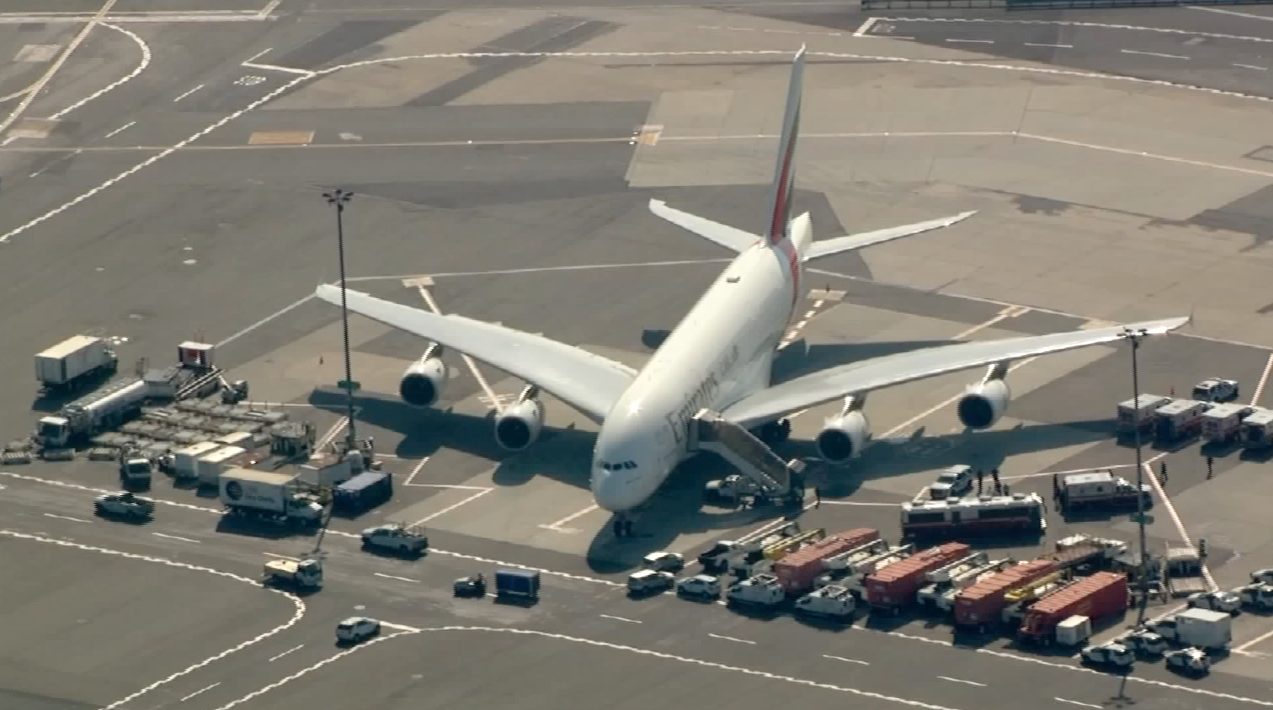 Ten sick passengers were taken to the hospital after their international flight landed at Kennedy Airport, where it was inspected while officials investigated why so many on board were feeling ill, officials said. 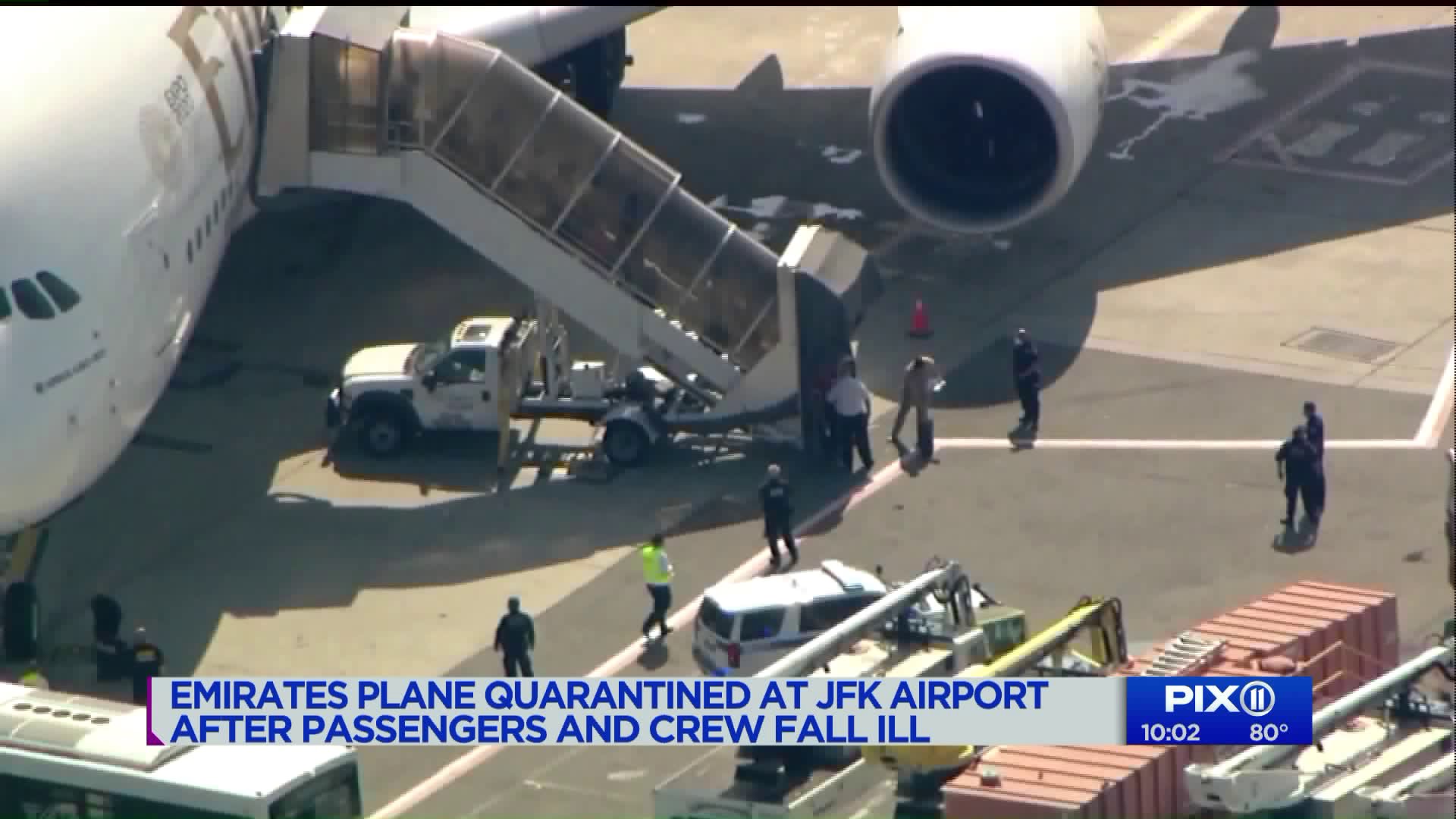 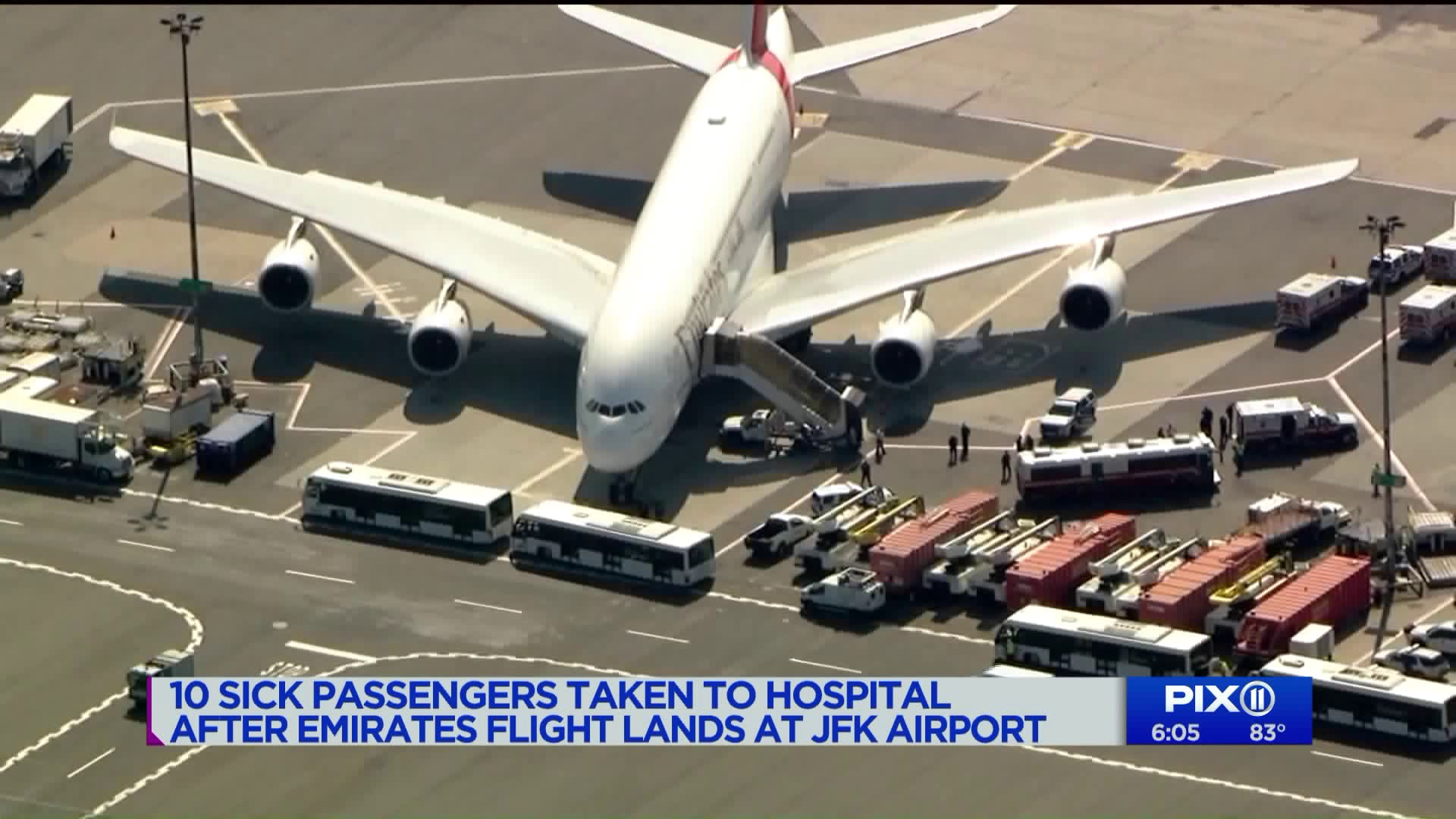 NEW YORK — Ten sick passengers were taken to the hospital after their international flight landed at Kennedy Airport, where it was inspected by officials trying to figure out why so many on board were feeling ill, officials said.

Of the more than 500 souls on board, 19 people were sickened -- 10 of them were taken to a hospital while the other nine refused medical attention, a spokesman for Mayor Bill de Blasio’s office said. Seven of the people taken to the hospital were crew members. The remaining three people were passengers.

It appears they have the flu and health officials expect to determine exactly what they were sickened by later on Wednesday.

About 100 passengers and crew members on Flight 203 from Dubai complained of illness, including cough and some with fever, the Centers for Disease Control and Prevention said in a statement.

It’s not yet known what was making the passengers sick but their symptoms “point to the flu,” de Blasio spokesman Eric Phillips said.

Upon landing,  a massive emergency response met the Airbus A380 jetliner.  Emergency Service Unit officers from the Port Authority Police Department and the NYPD joined personnel from the FDNY, the Office of Emergency Management and the federal Centers for Disease Control and Prevention (CDC).  They isolated the airplane on the tarmac, and began a process to assess the illness, as well as a course of action.

"I was scared," said passenger Ishtiaq Khan, who'd taken the flight, Emirates 203, from Dubai to JFK, after connecting from Bangladesh. "Too many cops and things like that outside of the plane."

Health officials evaluated the passengers as they deplaned, including taking their temperatures and making arrangements for those that needed care, the CDC said.

Medical staff from the CDC had all passengers fill out health care questionnaires on board, passenger Srinivasan Rao said.

"They told us that everybody has to fill out a form, so we can track in three weeks' time who you are, where you are, and how you are," he said.

Passengers who were not ill were allowed to continue with their travel plans.

"It was very, very obvious to a layperson that these people were incredibly sick, and there were literally a hundred of them," said passenger Erin Sykes. "And to board them onto a confined space, it's culpability in my opinion."

The CDC staff took all passengers' temperatures, as they deplaned, Sykes said.

"People who did have high temperatures,they were taken away," she said.

Phillips initially said the plane was not allowed to go to the terminal but instead had been quarantined. Later, a spokesperson for the Port Authority of New York and New Jersey said the aircraft was not quarantined but was inspected.

Emirates Airlines issued a statement that read, in part, "Our crew and on-ground staff extended our full cooperation to the authorities during the on-board screenings, and the aircraft has now been handed back to Emirates."

"Due to the delay with the inbound flight, the return flight, EK204 from JFK to Dubai, will be delayed by approximately three hours. Passengers with connecting flights in Dubai who are impacted by the delay will be assisted with re-bookings by our local ground staff."

"We apologize to our customers for any inconvenience caused. The safety and well-being of our customers and crew is always our top priority,” the statement read.

Deplaning and having temperature taken pic.twitter.com/MVxWqJPLTe

Getting off plane & getting temperatures checked. The girl in front of me is pregnant, poor thing! #emirates #emirates203 pic.twitter.com/OXF2j3e5Rq

Statement: Emirates can confirm that about 10 passengers on #EK203 from Dubai to New York were taken ill. On arrival, as a precaution, they were attended to by local health authorities. All others will disembark shortly. The safety & care of our customers is our first priority.

AIR11 is over the scene where the Emirates plane is being quarantined: