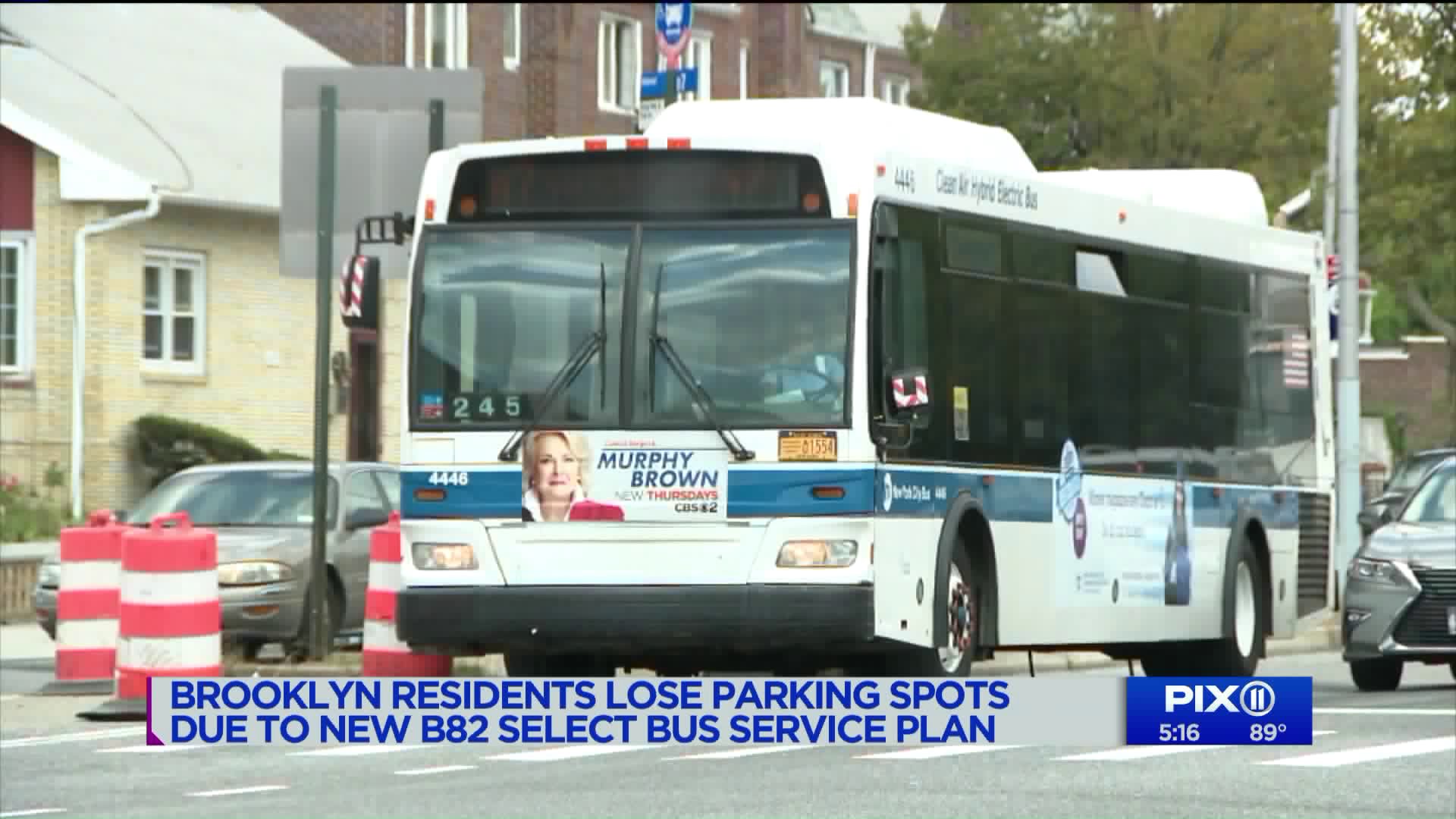 Opponents are taking issue with the plan for the new route as well as a new bus stop at Kings Highway and Avenue K, particularly because there is already a stop for this limited service bus just three blocks away. They think it will cause unnecessary hazards for the residential area.

FLATLANDS, Brooklyn -- Residents in Brooklyn are taking issue with planned rerouting of the B82 Select Bus Service because they say it will cause traffic, congestion and the loss of parking.

“This use to be parking spaces -- one here, one here,” Moniquet Saintil said.

Saintil has lived in the Flatlands neighborhood for almost 30 years, so he was surprised when he came home from a trip in July and found he lost the parking spaces in front of his house.

“Now they cut it off. They've already given me a ticket for parking in front of my own house,” Saintil said.

His neighbors are just as frustrated, claiming they weren’t notified by the city of the plan to make room for a bus service they say those who live in this neighborhood don’t need.

The B82 select bus service runs from Coney Island to Spring Creek.

Now, the route goes from Flatlands Avenue to Flatbush Avenue then to Kings Highway.

The new B82 SBS route will continue down on King Highway and merge onto service road turning onto Avenue K then meet up at Utica Ave and Flatlands to continue along the Flatlands Avenue route.

Opponents are taking issue with the plan for the new route as well as a new bus stop at Kings Highway and Avenue K, particularly because there is already a stop for this limited service bus just three blocks away. They think it will cause unnecessary hazards for the residential area.

“Look at this turn it makes no sense at all,” said Councilman Jumaane Williams, a vocal critic of the plan.

“Kings Highway can benefit from SBS but putting a kiosk right here it’s not the place to have it. Putting a route where we’ve never had one and trying to make this turn makes no sense.”

Others are concerned about safety and congestion, and the orange and white cones creating confusion. PIX11 News' cameras witnessed a crash while our crew was there.

“It’s very difficult to cross here especially if you’re a senior you have to run across and it’s impossible to run across,” Mona Drooker said. “It’s like a corn maze.”

The new route is set to launch in October.

Although those who live in the neighborhood said they don’t need another bus, the MTA says the new re-routing plan would be beneficial to bus riders and drivers.

In a statement, the agency said:

“This plan was tailored in direct response to feedback from customers and elected officials, including moving local bus service back to Flatbush and Flatlands Av and other changes that preserve the benefits of Select Bus Service. When this new service starts up next month, trips will be faster and neighborhoods will benefit from the environmental and economic benefits of a pedestrian-friendly service that gives people a new alternative to driving. We’re proud of the extensive community outreach we’ve done for this project: Over the past three years we’ve held more than three dozen meetings in local communities, including multiple meetings with elected officials and local community boards, plus numerous other visits to community facilities like libraries and senior centers.”