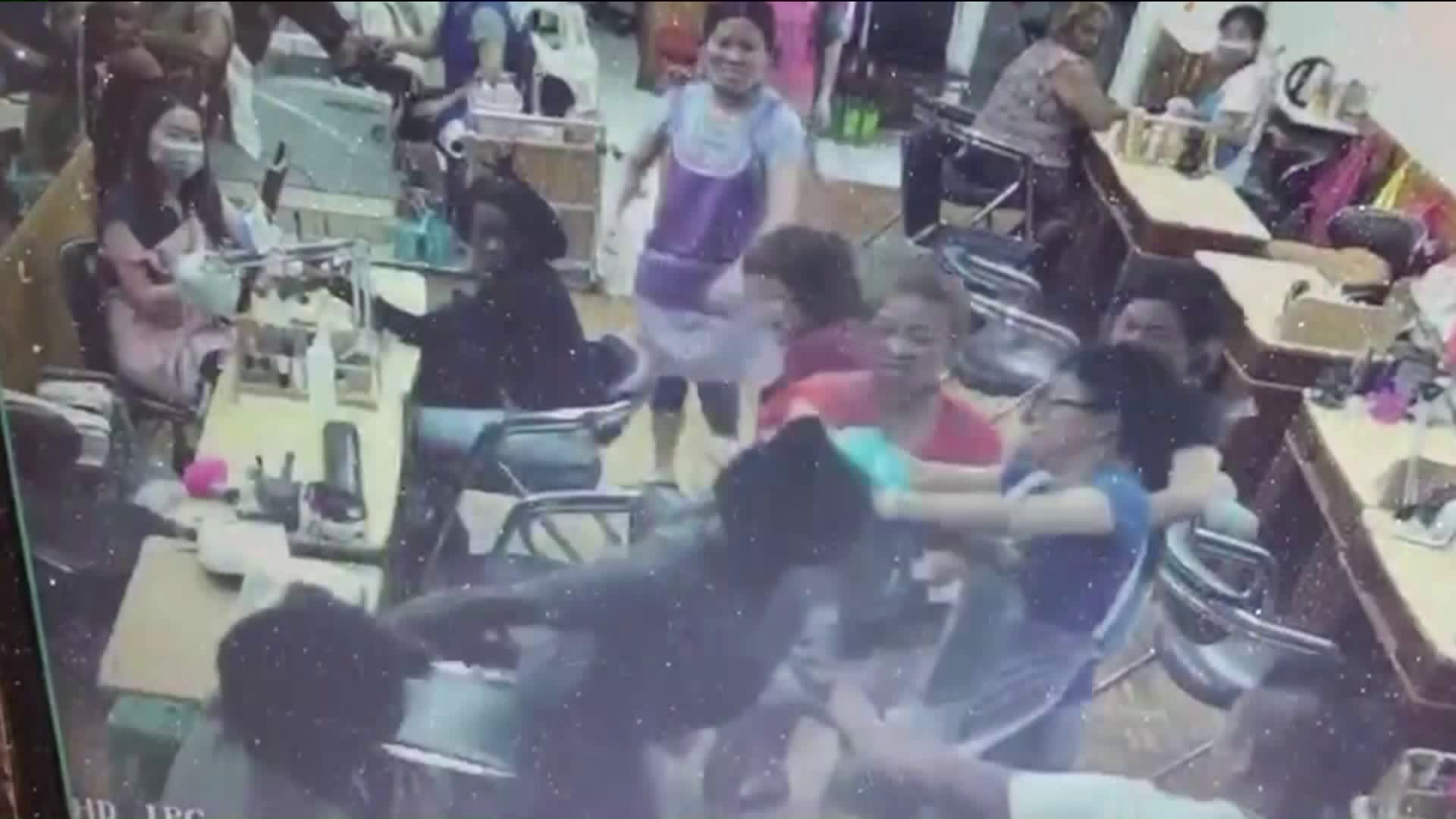 The brawl happened at New Red Apple Nail in East Flatbush after a customer refused to pay either part of or all of her bill following an apparently botched eyebrow treatment. The customer said she paid something, but the store`s owner said she refused to pay any of the money she owed. 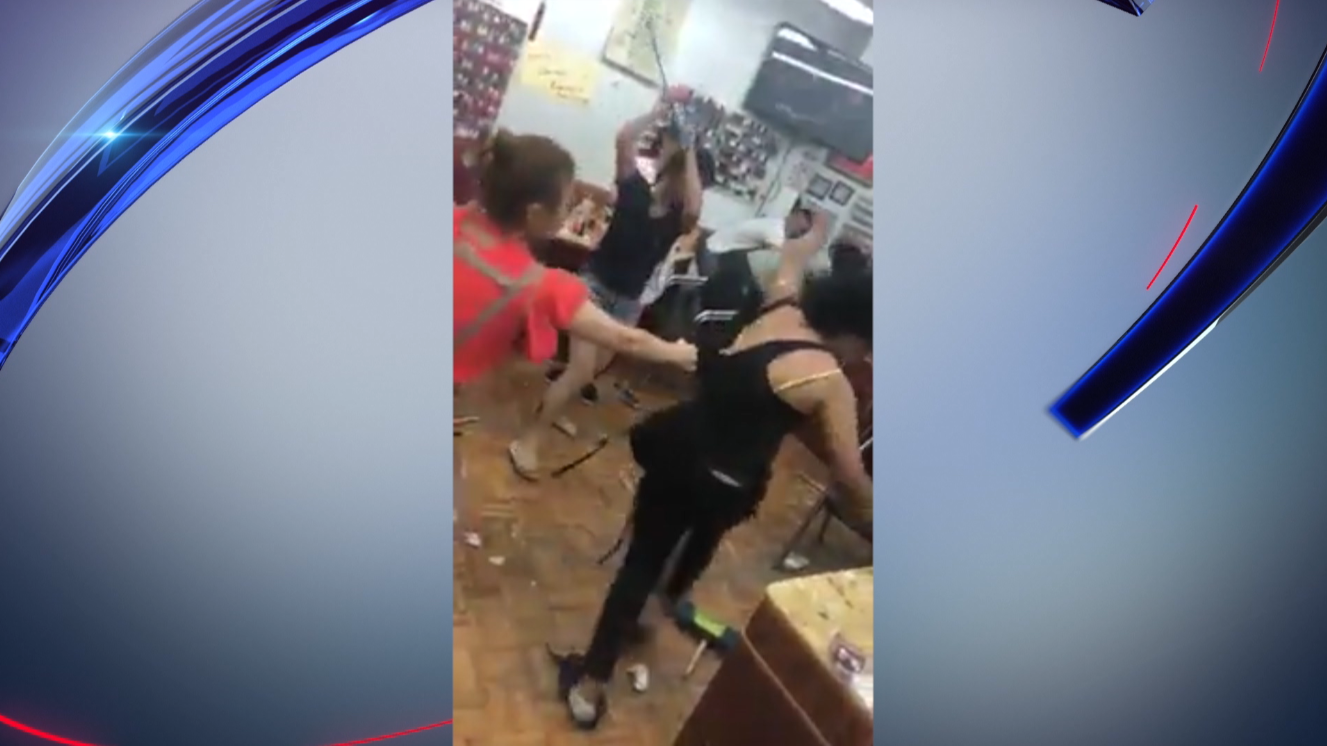 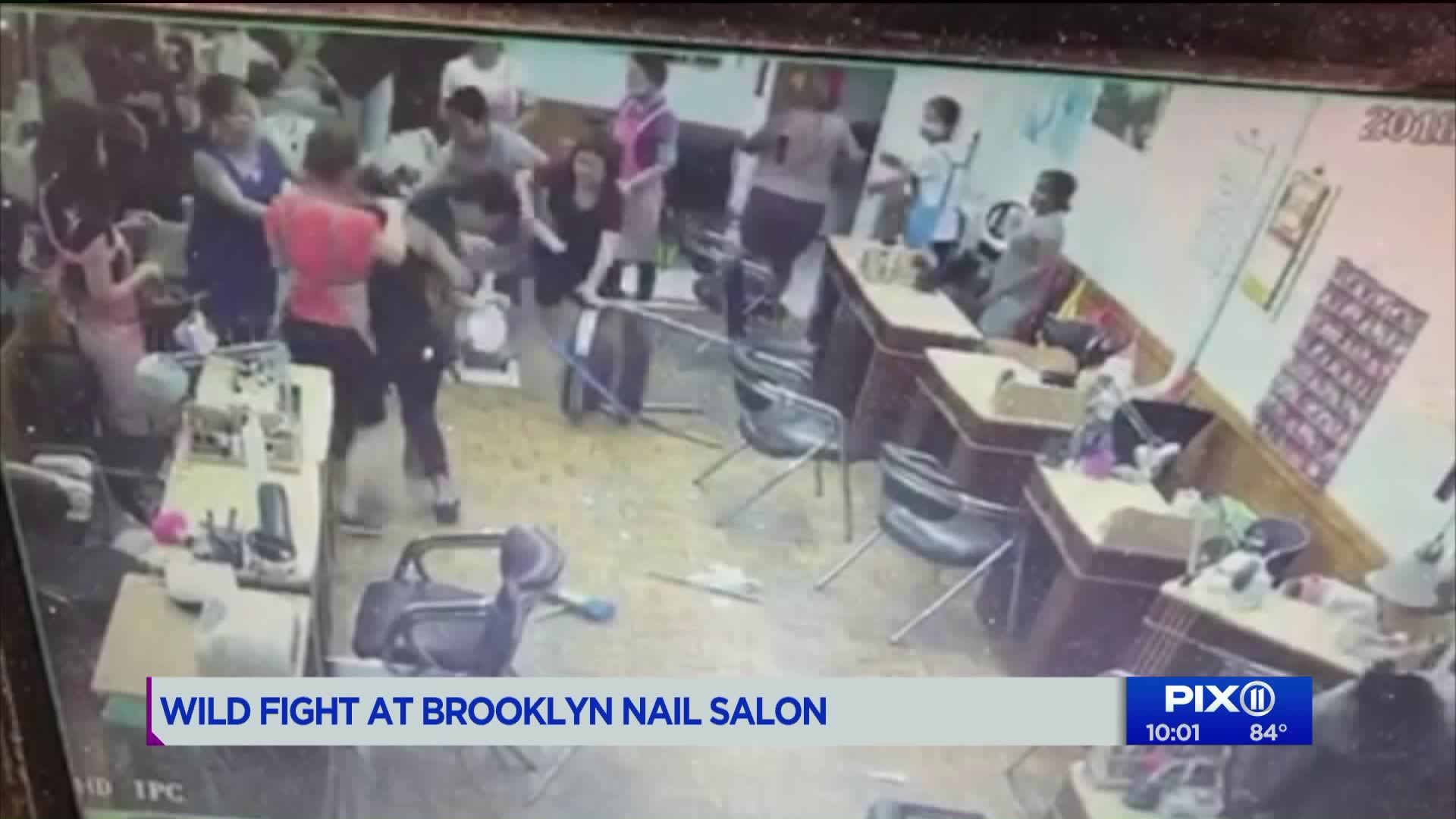 The brawl happened at New Red Apple Nail at 1426 Nostrand Ave. in East Flatbush after a customer refused to pay either part of or all of her bill  following an apparently botched eyebrow treatment. The customer said she paid something, but the store's owner said she refused to pay any of the money she owed.

The protest happened after video was shared on Facebook Friday night showing a group of women in smocks surrounding a woman as a second woman whacks her with a broom. The woman being hit is beaten on the back as she walks out of the salon. That's when the video shows the women in smocks turn toward two black women huddled against a wall. The groups yell at each other, and one employee throws a liquid at the women.

Surveillance video given to PIX11 Monday shows the beginning of the brawl. It is unclear which party started the fight.

An activist who protested over the weekend claimed the liquid thrown was acetone, the primary ingredient in nail polish remover, and that the altercation began because a woman at the salon with her two grandchildren did not want to pay for a poorly done eyebrow treatment.

“So because she did not want to pay the $5 for her messed-up eyebrows, they attacked this grandmother and her two granddaughters with sticks, threw acetone on them and then called the police on them,” activist Jasmine Johnson alleges.

The woman who initially posted video of the incident also said a patron refused to pay the salon because she felt the employee did not do a good job, prompting the fight. The video has so far been viewed more than 720,000 times.

"Share this cause the cops decided to arrest the black people but not the Chinese people who ganged up on them," Mercy Maduka stated on Facebook.

Police on Monday confirmed the incident resulted in two arrests.

Employee Huiyue Zhing faces charges of misdemeanor menacing, misdemeanor criminal possession of a weapon and harassment. She allegedly beat customer Christina Thomas with a broom, causing a laceration to Thomas' neck and injuring her back.

Thomas faces charges of misdemeanor assault, misdemeanor menacing and harassment, police said. She apparently punched and slapped someone, dragging them over the floor.

Zhing was hospitalized with visible injuries to her face and body, and Thomas refused medical attention, according to police.

Officers had gone to the salon to arrest a second employee, but that worker was not there at the time.

Police have not confirmed any other details in the case, but a spokesperson for the Brooklyn District Attorney's Office confirmed they are examining all the evidence and will evaluate charges based on that.

Over the weekend, Johnson organized a demonstration in front of the salon.

"We don’t need to protest, we need to financially castrate this business. They cannot survive and we cannot feed them," Johnson said in Facebook video capturing the protest.

Since the fight, hundreds of negative reviews, often referencing the incident, have been left on the salon's Yelp page. Many demand it be closed, and tell locals take their business elsewhere.

Police had to escort the salon owners out of the business today as furious community members shouted around them. One person at the protest threw a bottle, hitting an NYPD officer in the back.