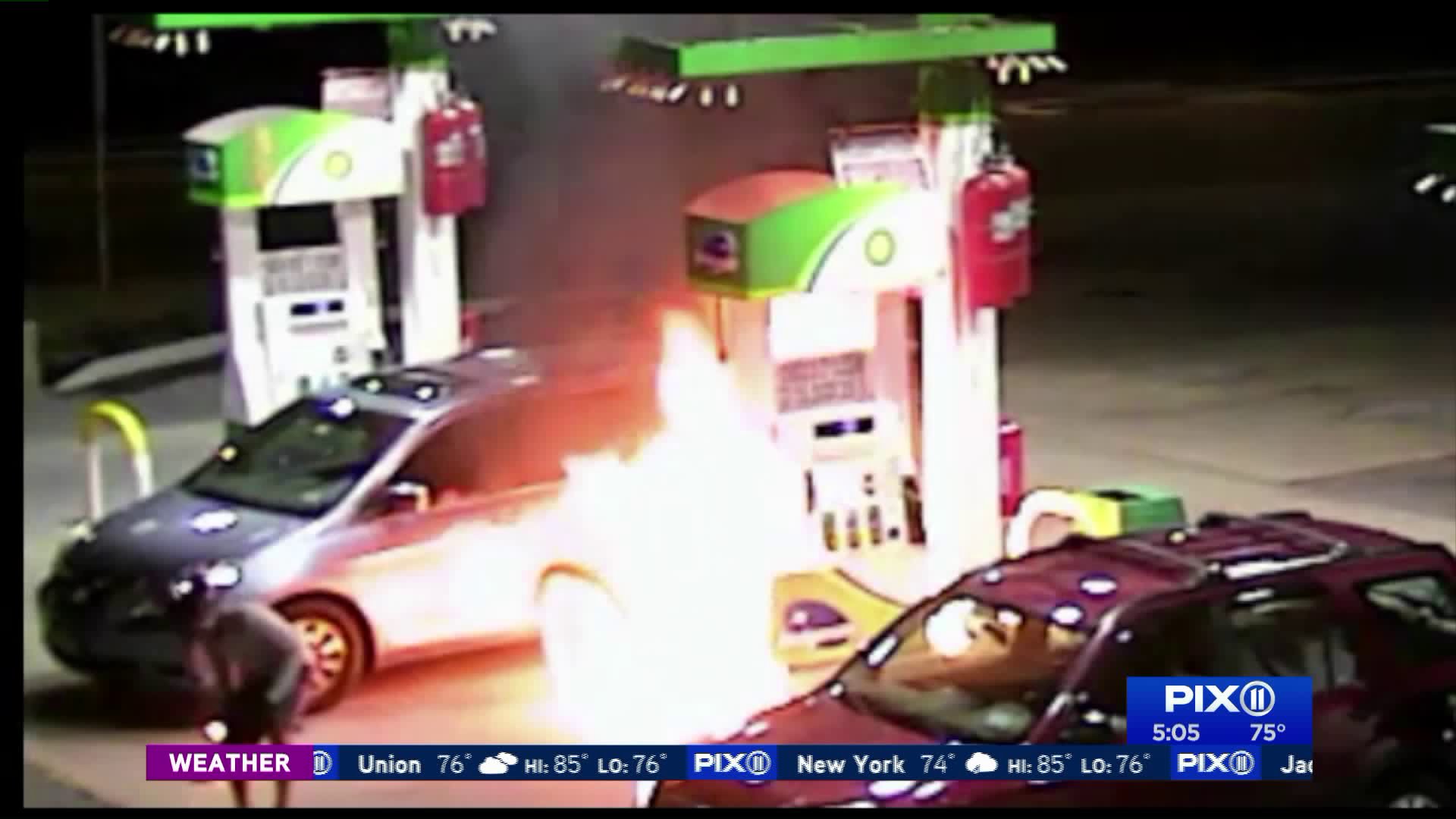 A man apparently tried to blow up a Staten Island gas station, and almost got killed in the resulting fireballl. Now, the search is on for the arsonist whose actions would have had far more hazardous results if safety systems required by law had not been in place, according to law enforcement sources. The situation could have been even worse -- catastrophic, even, according to some local residents -- if the flames had managed to spread much farther than they did. 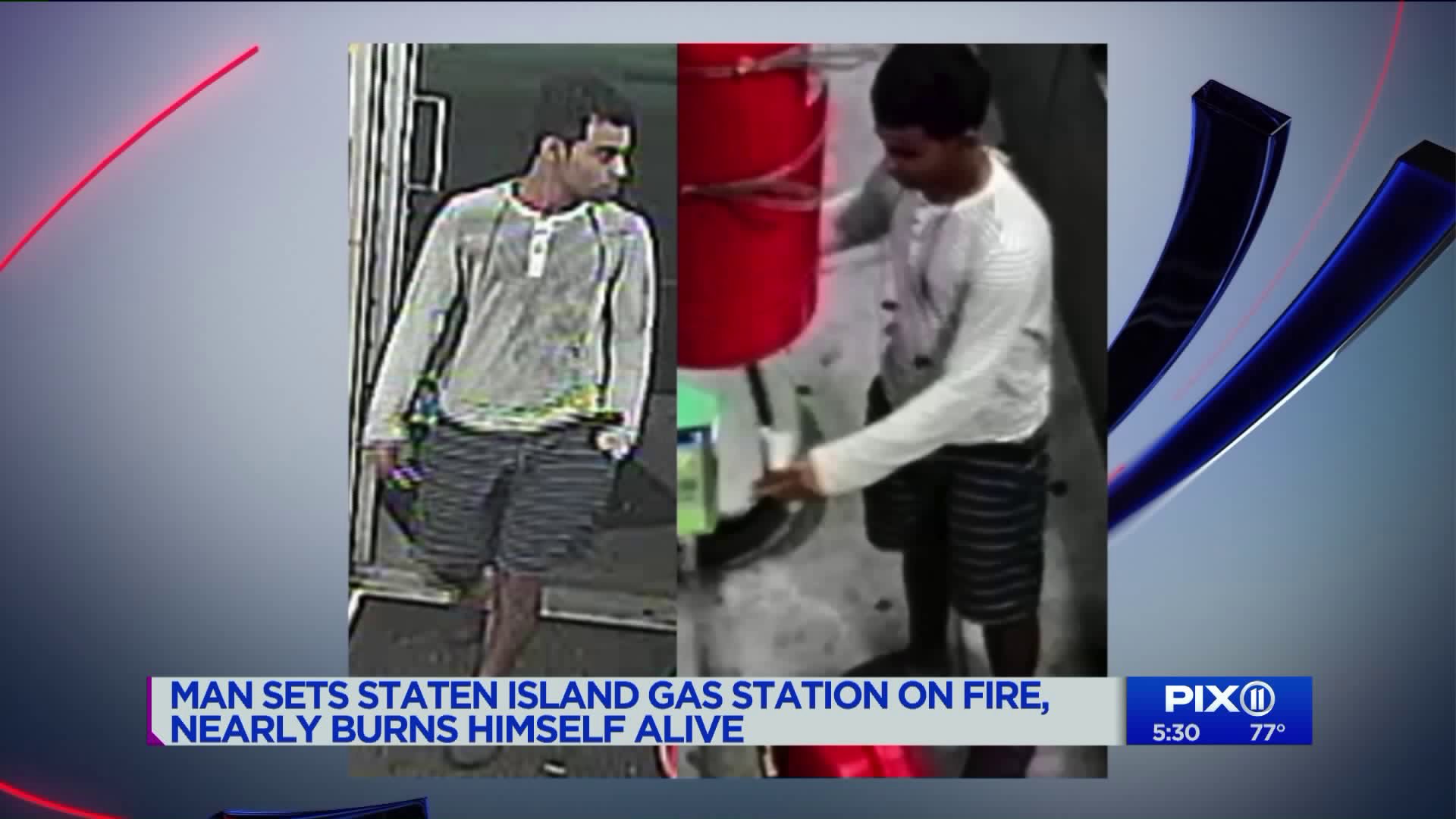 WILLOWBROOK, Staten Island — A man apparently tried to blow up a Staten Island gas station, and almost got killed in the resulting fireballl.

Now, the search is on for the arsonist whose actions would have had far more hazardous results if safety systems required by law had not been in place, according to law enforcement sources. The situation could have been even worse -- catastrophic, even, according to some local residents -- if the flames had managed to spread much farther than they did.

The NYPD released surveillance video on Monday night of the emergency that had taken place at around 1:50 A.M. at the 24-hour BP filling station at the intersection of Richmond Avenue and Victory Boulevard here.

In the video, a man wearing a long-sleeved, light-colored or white shirt starts to fill up a red gas can he'd bought in the gas station's convenience store. As he pumps gas into the container, he sporadically sprays streams of gasoline around the gas pump and onto the cement at its base. Next, he pulls out a piece of paper, ignites it with a lighter and then flames burst out all around. The man flees, possibly having been burned himself.

"[I] don't know if he realizes he could blow himself up," said Bob Guarino, a regular customer at the 7-Eleven convenience store attached to the gas station.

He saw the surveillance video for the first time when PIX11 News showed it to him outside the 7-Eleven.

The same was the case for customer Arlene Gunderson.

"Oh my God," she gasped, watching the flames engulf Pump Number 10 in the surveillance video recorded by the gas station.

Police have also published still photo images of the suspect, one of which was taken when he'd been inside the convenience store buying the gas can just prior to the incident. It's not clear how extensive his injuries were from the flames, or if he was injured at all. However, police report, a 21 year-old man who'd been nearby when the fire erupted had to be taken for treatment at a local hospital.

The incident has resulted in a one feeling among some local residents.

At least one other neighbor pointed out that the gas station is adjacent to the path of the large Buckeye jet fuel pipeline. It runs from a refinery in Linden, New Jersey, and across Staten Island for about nine miles on its way to its ultimate destination, JFK Airport, in Queens.

In 2007, NYPD and federal investigators foiled a terror plot to ignite the pipeline and create mass destruction across New York City. Some neighbors expressed concern that Monday's conflagration could have been an attempt to imitate the foiled plan.

However, at the time that the pipeline plot had been foiled, the company that owns the pipeline, Buckeye Partners, said that such fuel carrying lines can't be ignited just by igniting a flame on or near it.

The overhead fire suppression system also prevented a potential tragedy. It’s a network of industrial-sized chemical fire extinguishers that are activated by heat sensors over the gas pumps. The state of New York requires that such a system be in place at all gas stations, and at the Willowbrook BP station, the system worked perfectly, as the surveillance video shows.

“It was out in the first three to four seconds after the initial burst of flames,” local resident Eric Roman said about the fire. “It was very impressive, to say the least.”

Also working well during the attack was the surveillance camera system, which left customers and residents confident that catching the arsonist is only a matter of time.

A group of more than half a dozen NYPD arson and explosives specialists was doing just that on Tuesday afternoon as part of their investigation. They were joined early Tuesday evening by NYPD crime scene unit investigators, who were using still cameras to document the gas station and its surrounding area in detail.

The NYPD also has a stationary surveillance camera at the intersection where the gas station is located. It may yield further vital information about the crime and the suspect.