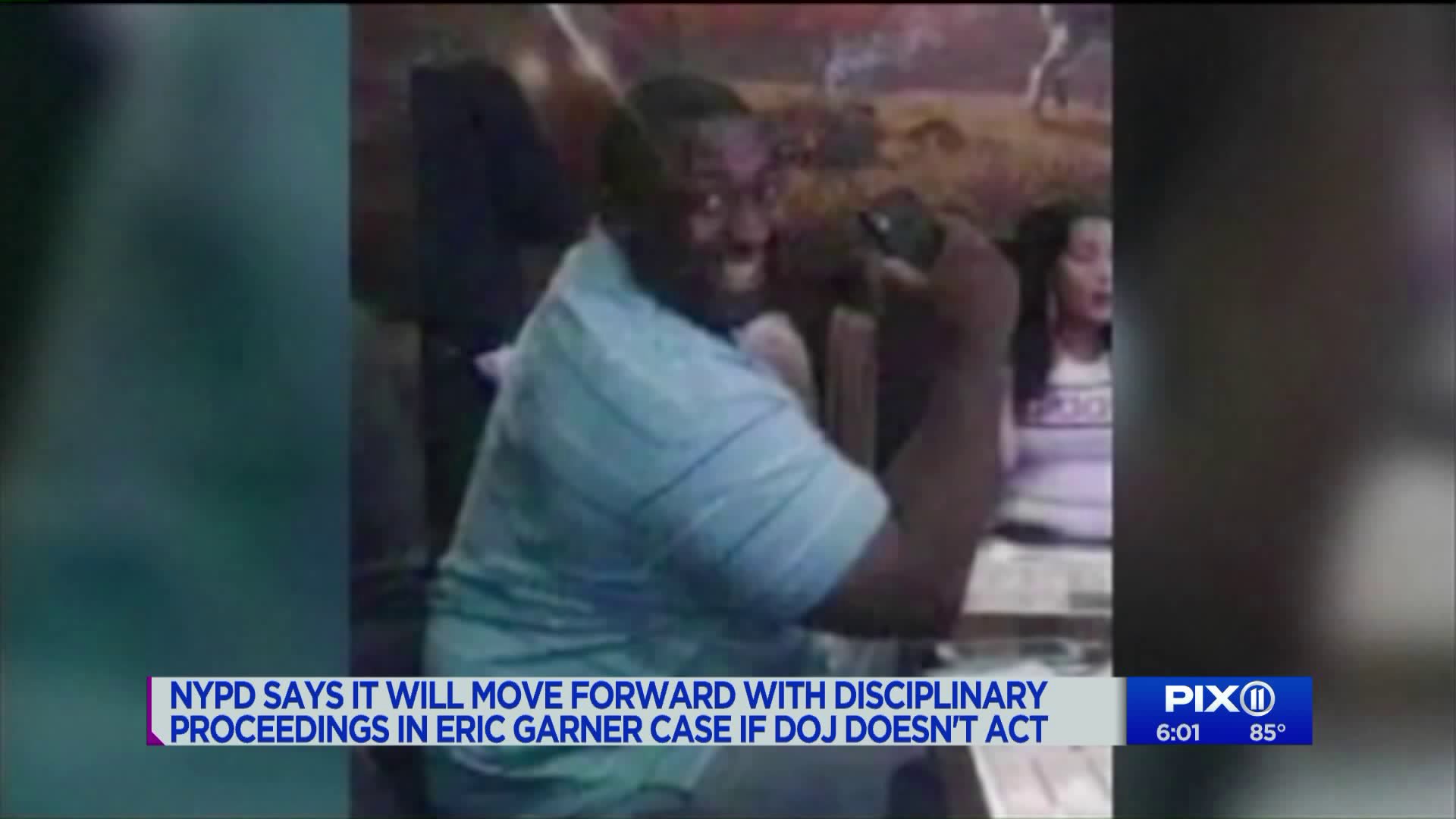 The New York Police Department announced on Monday that it will allow disciplinary proceedings to go forward against a patrolman accused in the notorious chokehold death of an unarmed black man, saying it`s run out of patience with federal authorities` indecision about whether to bring a criminal case. 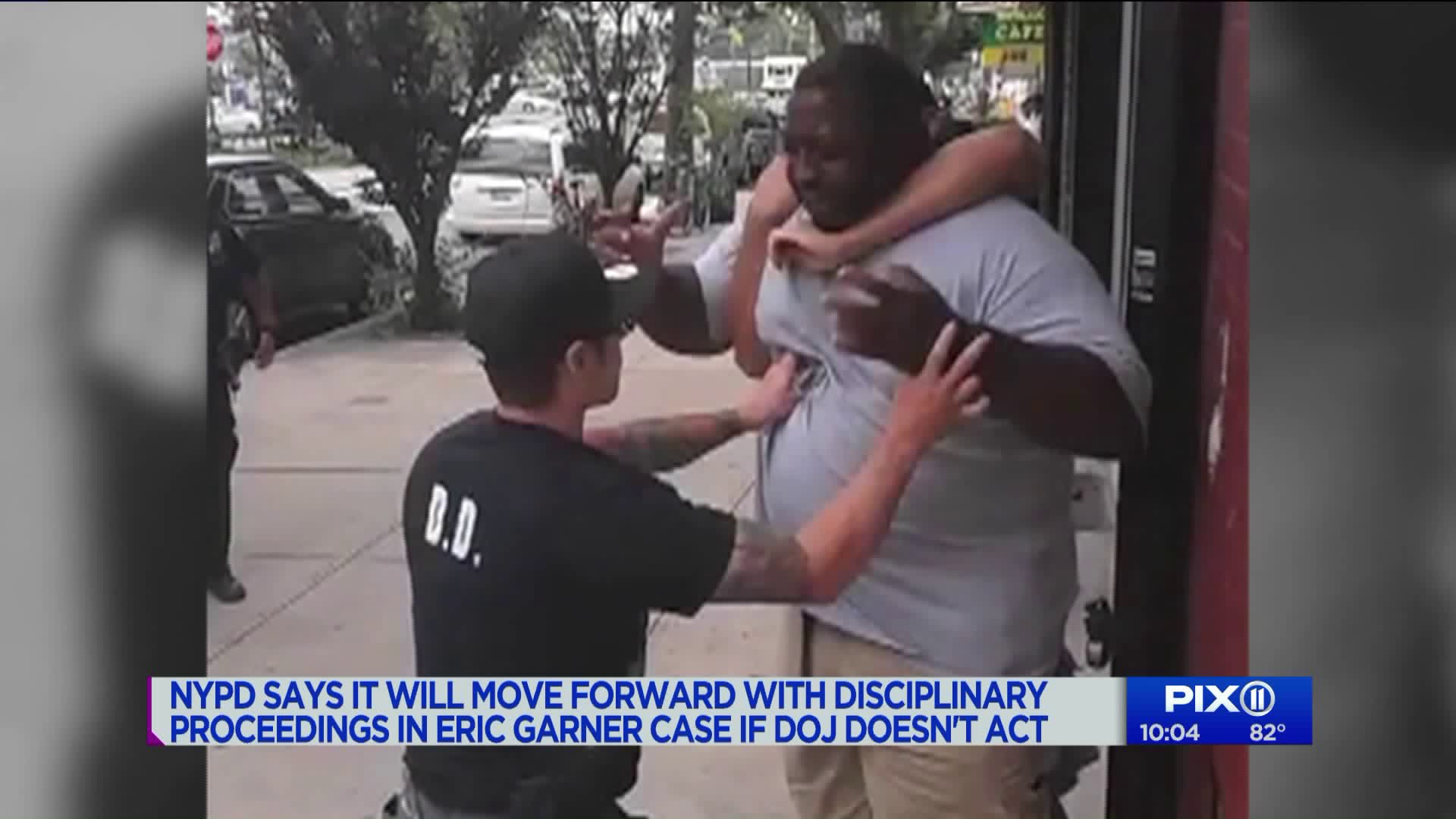 NEW YORK — The NYPD will move forward with internal disciplinary proceedings against the police officer involved in the chokehold death of Eric Garner, unless the U.S. Department of Justice announces its own criminal charges in the case, according to a letter from the department obtained by PIX11 News.

The letter, dated Monday, gives the DOJ until Aug. 31 to “publicly announce its intention to file criminal charges in the matter,” or else the department will move ahead with disciplinary proceedings against “some of the NYPD officers involved in the incident."

It comes a day before the fourth anniversary of Garner’s death on July 17, 2014. The 43-year-old died after he was put in a chokehold by NYPD officer Daniel Pantaleo, who was attempting to arrest Garner for allegedly selling loose, untaxed cigarettes in Staten Island.

Since Garner’s death, the NYPD, “in deference to ongoing requests” from federal investigators, has held off on its disciplinary proceedings, the letter signed by NYPD’s deputy commissioner on legal matters Lawrence Byrne says.

But there seems to be “no end in sight” for when the DOJ will make its decision on how it will proceed, the letter says.

ATTACHED: @NYPDnews letter sent to @CivilRights , stating they will hold an internal disciplinary trial for NYPD Officer Daniel Pantaleo, who placed Eric Garner in a fatal chokehold 4 years ago tomorrow, unless the Justice Department charges Pantaleo by August 31st. pic.twitter.com/AgJMSYyasy

The NYPD said “members of the public in general and the Garner family in particular have grown impatient."

“The NYPD has come to the conclusion that given the extraordinary passage of time since the incident without a final decision on the U.S. DOJ’s criminal investigation, any further delay in moving ahead with our own disciplinary proceedings can no longer be justified,” the department’s counsel wrote.

A grand jury chose not to indict Pantaleo, sparking protests across the nation. Garner’s family later reached a $5.9 million settlement with the City of New York.

In a statement, president of the police officers' union Patrick Lynch said:

“We agree that the Justice Department’s leadership should move to close Police Officer Pantaleo’s case and put an end to what has been a highly irregular fishing expedition by those seeking an indictment at all cost. However, that should not trigger a race by the NYPD to reach a pre-determined outcome in its own disciplinary processes. Police Officer Pantaleo is entitled to due process and an impartial consideration of the facts. If that is allowed to occur, we are confident that he will be vindicated and will finally be able to move forward."