Drunk crane operator who ran over cars on Long Island will remain in jail: police 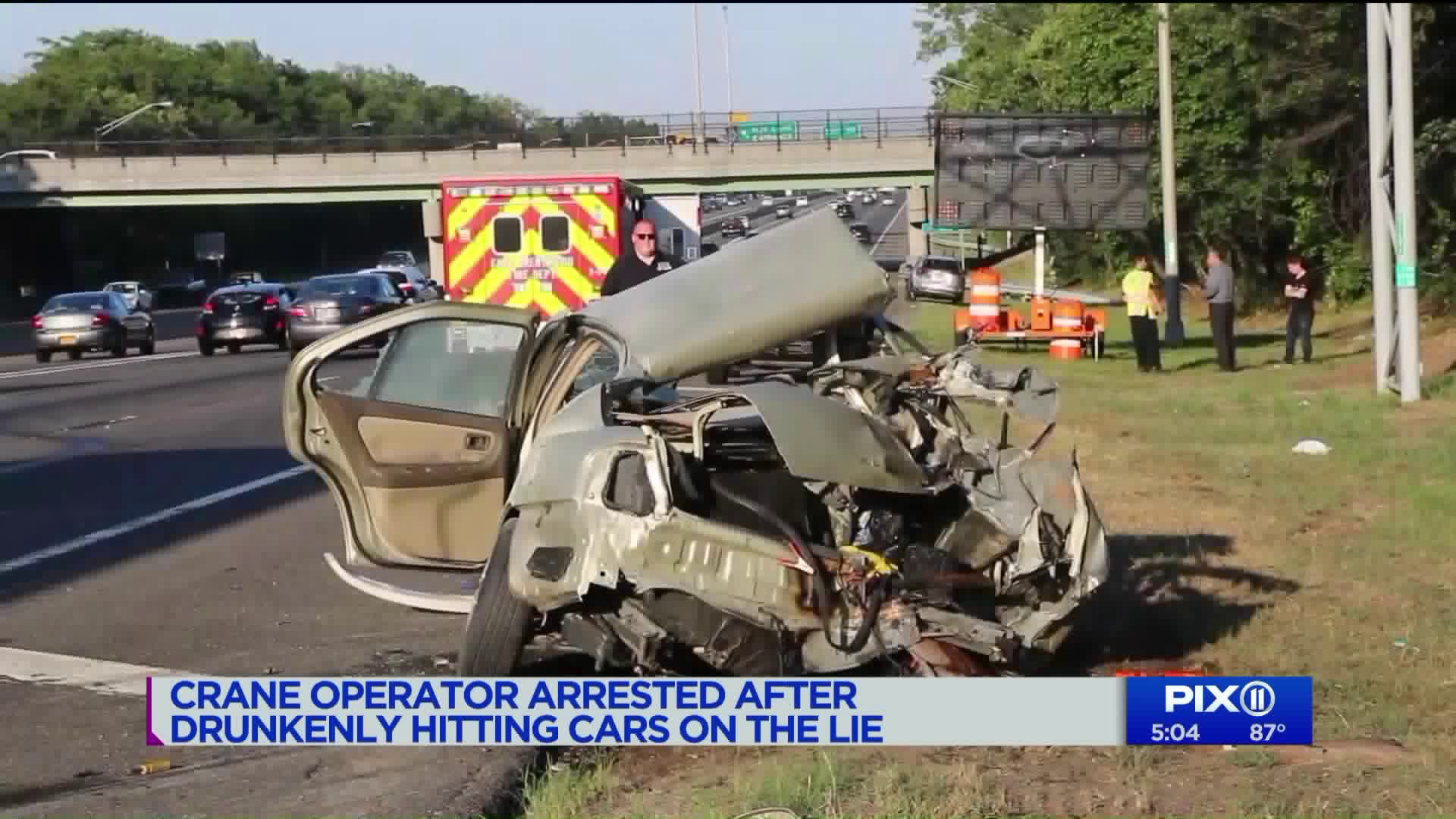 Authorities say a police officer made a daring leap to stop a crane truck after its allegedly intoxicated driver smashed into four vehicles and sped off on the Long Island Expressway. Four people were injured.

BROOKHAVEN, N.Y. —  Its tires are as tall as a grown man, and its chassis is about the same size as six large pickup trucks put together. Now, a mobile construction crane is impounded, and its driver is behind bars, after he drove his 30-ton vehicle over some cars, and into others, while intoxicated, according to police.

The driver denies the DUI charge, but four damaged cars, and three people in the hospital show that the damage, at least, is undeniable.

It happened on Tuesday, around 6 p.m. during the evening rush. The crane, driving east on the Long Island Expressway, totaled a Nissan Altima near Exit 57, while the car's driver was still in the driver's seat, according to Suffolk County Police Highway Patrol. The driver of the car was injured, but is expected to recover.

The crane proceeded to hit another car and two SUVs, sending two more drivers to the hospital, but the crane kept on going, officers said.

"That thing is a tank going down the road," said Officer Joseph Goss of the Suffolk County Police Department Highway Patrol. "It's tremendous the damage that it caused."

Goss was the first officer to respond to 911 calls about the crane. Goss called for backup, and pursued the crane in his police cruiser. The crane was driving 48 miles an hour, Goss said, and he could not get it to stop at first.

"He was going into left lane, [then] right lane," Goss said at a news conference Wednesday morning. "He wasn't able to maintain his lane whatsoever."

For more than six miles, and past nearly seven exits on the LIE, the crane kept moving, in heavy traffic. Goss and a colleague,  Officer Luis Bustamente, were able to slow the traffic in their two cruisers, keeping drivers away from the moving crane.

That was not enough, Goss said. It was becoming more apparent that if the crane were to stop, it would have to be done by someone other than the crane driver.

"When I was coming up to Exit 62," Goss said, "I really got into panic mode because I thought he was going to kill somebody."

The lights and sirens of Goss's cruiser apparently finally convinced the crane to slow down enough for Goss to take drastic measures.

"I ran up to the vehicle, jumped onto the step rail of the cabin of the truck, opened the door — fortunately for me, it was unlocked," Goss said. "I was able to use my service weapon to convince the driver to put the vehicle in park, which he did."

The driver, Brian Sinclair, 47, said only two words when he was face-to-face with the Suffolk County Police Department officer. "What's up?" Sinclair said, according to Goss.

He and fellow officers who showed up at the scene put Sinclair under arrest, and gave him a field-sobriety test. He "had bloodshot, glassy eyes, an odor of an alcoholic beverage on his breath, was slurring his words, and [was] unsteady on his feet," according to the docket report filed against him. Sinclair refused to take a Breathalyzer test.

On Wednesday afternoon, he pleaded not guilty and was given $5,000 bail, which he was not able to pay. So, for now, Sinclair is in jail, charged with driving while intoxicated and leaving the scene of an accident.

His attorney said that they intend to fight the charges fully. Meanwhile, the drivers of the cars that were damaged by the crane are all expected to be fine.

The crane is owned by the Bay Crane company. It had no comment.