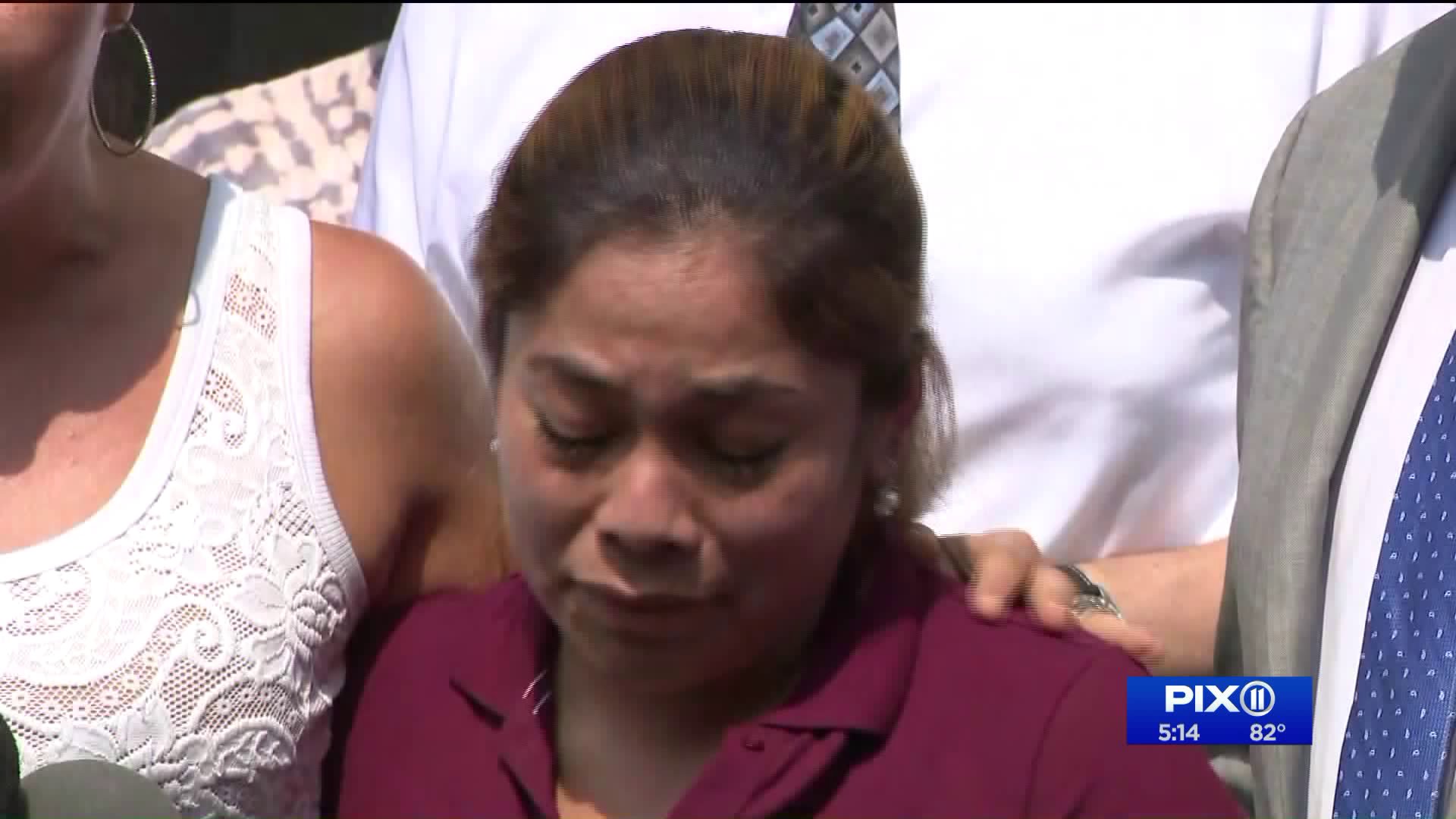 A Guatemalan mother who was separated from her three children at the U.S.-Mexico border said she was overjoyed following their reunion on Tuesday at a social services center.

EAST HARLEM, Manhattan —For nearly six weeks, a mother seeking asylum in the U.S. has been separated from her three children who were removed from her custody by U.S. federal agents at the border with Mexico, but that situation changed on Tuesday.

Yeni Gonzalez-Garcia arrived in New York after a long trip from Arizona. She was reunited with her three children, thanks to grass roots efforts led by a pair of New Yorkers.

Just before 9:00 a.m. Tuesday, Gonzalez, accompanied by elected officials and a trusted translator who’d helped to drive her from Arizona, walked into the Cayuga Center for Children on Park Avenue between 130th and 131st Streets. It was the end of a 2,400-mile journey to finally be with her children again.

Since May 19, Gonzalez’s daughter, 9, and two sons, 6 and 11, have spent their days at the Cayuga Center, and have stayed overnights with a foster family, all the while anticipating seeing their mother once again.

It happened, minutes after she entered the center. The staff ensured that the actual encounter was in a secluded room. Nobody was present except the three children and their mother.

"They hugged me and we cried," Gonzalez said at a news conference in front of Cayuga Center after the reunion. "They told me they want me to take them home soon."

Before their separation, she'd made her children a promise. She reminded them of it Tuesday.

She was with her children for about two hours before the news conference, and most of that time had the four of them alone.

The encounter between the woman who'd been arrested for illegally crossing the border and her children was made possible by the posting of her $7,500 bond. The money was raised through a GoFundMe page set up by New York resident Julie Schwietert Collazo. By Tuesday evening -- eight days after it was set up -- the crowdsourcing page had raised more than $39,000, through donations from more than 700 people.

Schweitert Collazo said that the excess funds would be used to help Gonzalez prove to government monitors that she is financially able to support her children. Doing so is a criterion for allowing detained children to be released to parents or other relatives.

Schweitert Collazo also said that she intends to set up a template to help other concerned citizens carry out efforts to get detainees released and transported to children from whom they have been separated.

The GoFundMe page originator called her next project a "replication toolkit," she said, "so people can open source model."

Schweitert Collazo said that another New York-based supporter of Gonzalez's cause, Meghan Finn, organized a series of volunteer drivers stretching across the country from Eloy, Arizona, where Gonzalez had been detained, to New York.

The first driver, Janey Pearl Starks, is a Phoenix resident who said that she'd missed Gonzalez so much after the first leg of the trip, that she decided to fly to New York to greet her new friend, as well as to help translate for her. Sparks was with Gonzalez minutes after the private reunion with the children.

"She kind of snuck me through. So I was able to [see the children], and they're beautiful," she said, choking back tears. "They're just kids."

Gonzalez was also very teary eyed in her news conference after her reunion with her daughter and sons, but, she said, the tears weren't sorrowful.

"I feel so happy because I just saw my children, and my daughter gave me that lollipop," Gonzalez said, as she held up a lollipop that was clearly a very welcome gift.

As hard as her family's story is, however, Gonzalez's attorney said that they're actually lucky.

"There are 12 mothers right now that we represent," attorney Jose Xavier Orochena said. "We have to bring these families back together."

Orochena said that some of the mothers, who are detained at the same lockup where Gonzalez had been in Eloy, Arizona, don't know at all where their children are. He said that his 12 clients are representative of hundreds of others.

However, by contrast, at last, one mother knows exactly where her children are.

"I hope to God this [immigration] process moves as quickly as possible," Gonzalez said. "Because I don't want to ever leave their arms again."

But it may take quite some time for Gonzalez and her children to live together again, Orochena said. In order for that to happen, Gonzalez has to prove her identity. That requires that fingerprints submitted to a government contractor get approved. That process, he said, can take up to 60 days.

He said that he is hoping that he can help expedite the process. Still, Orochena said, reuniting the family fully could take "maybe a month."

In the meantime, Cayuga Center is allowing Gonzalez to spend as much time as she pleases with her children every weekday, when they'll all be at the center.