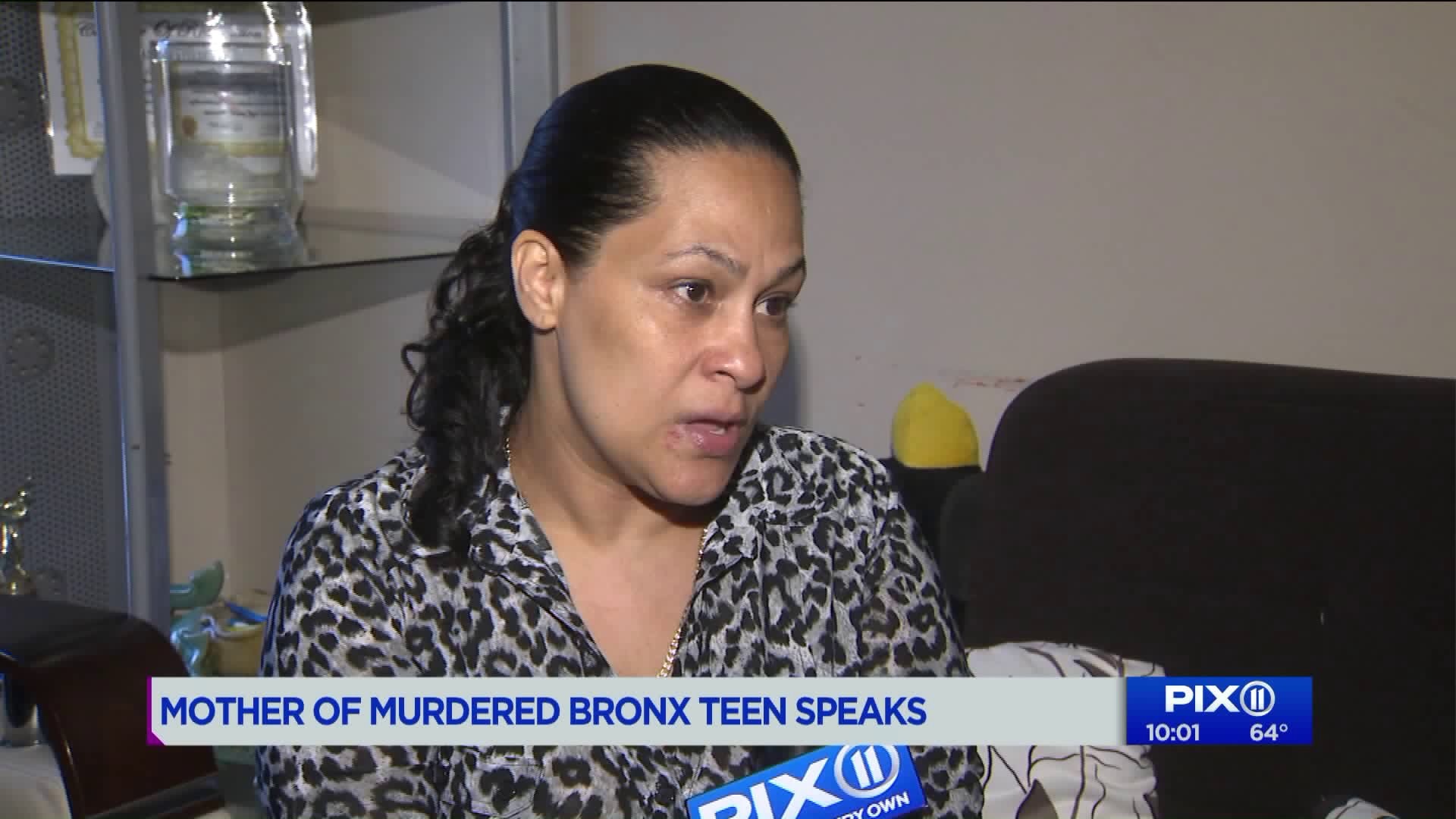 BELMONT, the Bronx— The mother of a 15-year-old, who was brutally stabbed to death outside of a Bronx grocery store, told PIX11 that her son was not the intended target.

Leandra Feliz is desperately searching for answers after her son, Lesandro "Junior" Guzman-Feliz was violently dragged out of a grocery store on Bathgate Avenue and killed in a vicious machete attack by a group of adult men Wednesday night.

The killers are still on the loose.

"They killed not only my son, they killed me too," Feliz said.

"I'm dead. I'm alive, but I'm dead too. I don't feel the color nor the taste of life now. For me, this life is not happy," the distraught mother said.

Feliz told PIX11 that she believes her son was wrongly targeted by a group pf vengeful gang members in a case of mistaken identity.

Surveillance video released by police shows the gang dragging the frightened teen from inside Zesarina Grocery Store and stabbing him multiple times with machetes and knives.

In another video captured from an aerial view, onlookers can be heard screaming at the men in an effort to distract or stop the attack.

After the vicious assault, Junior tried to run to the hospital, which was only a block away from the grocery store, but succumbed to his many injuries, police said.

"My son was a little shy kid, 15-years-old, just starting his life. He was a sweetheart. He'd never been in a fight in his short life," Feliz told PIX11.

Feliz says she believes the killers mistook her son for someone who "closely resembles"  him, who allegedly participated in a disturbing sex tape.

One of the gang members is believed to be the brother of a female shown in the ominous video, according to the mother.

Police could not immediately confirm nor deny that claim.

"His dream was to be a detective. Since he was 5-years-old, he liked to play with police cars. He would say, mommy, I want to be a police [sic] officer," Feliz said.

Leandra Feliz demonstrates how her late son, who aspired to become a detective, use to play with police cars.(PIX11 News)

Leandra told PIX11 that she has been receiving numerous tips on social media , and she is turning them over to police.

Dozens of concerned residents filled the street intersection outside of Zesarina Grocery store located at 526 East 183rd St. Saturday, in an effort to boycott the business.

The community appeared visibly outraged after, they say, the widely circulated surveillance footage from inside the grocery store appeared to show a lack of intervention by patrons and store employees, as Lesandro "Junior" Guzman-Feliz  was violently ripped away from the store.

A petition to have the grocery store permanently shut down, which was created by a Facebook user, has since garnered nearly 11,000 signatures.

The facade of the temporarily and prematurely closed grocery store was decorated with a growing memorial for the beloved teen.

A response from the owner of Zesarina Grocery Store to the backlash was not immediately available.

Friends and family continue to mourn, as they paid tribute to Guzman-Feliz with dozens of white, green, blue, red and pink candles, which illuminated taped signs of condolences surrounded by black and white balloons.

Mounds of floral bouquets lined the length of the right side of the grocery store, where Junior is said to have struggled for his life.

A GoFundme account for the family of Guzman-Feliz, which was created on June 21 by a family member, Ione Gutierrez, has surpassed a goal of $15,000 and is now reaching a donation count nearing $90,000.

Gutierrez credits the surge of support to rapper, Cardi B. The Bronx native paid tribute and demanded justice for the late teen in a post on Instagram.

Graphic images of the brutal murder sent shockwaves through the community, catapulting the hashtag #JusticeForJunior across multiple social media platforms.

Authorities have not confirmed any arrests at this time.

Police released surveillance video and photos showing the perpetrators, as well as a white vehicle and dark-colored sedan wanted in connection with the fatal attack.

Authorities are searching for the group of men allegedly involved in the fatal stabbing of a 15-year-old boy.